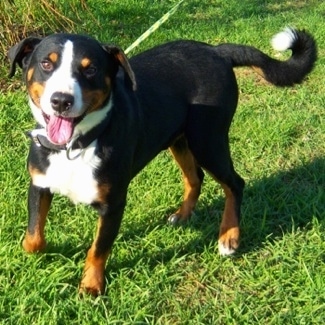 The Appenzell Mountain Dog is also called the "Appenzeller," the "Appenzell Cattle Dog" and the "Appenzeller Sennenhund." It is a muscular but not massive dog. A well-built and hardy animal, it is a versatile working dog. It has a wide, flat head with a muzzle that narrows toward a black nose. The eyes are small and dark and the ears are pendant. Its tail is carried rolled up on its back. Its limbs are straight. Its short double coat is considerably tight, thick and glossy. The basic colors are black or brown with symmetrical white and rust markings. A white blaze and rust marking over the eyes must be present on the head. Rust is always between the black and the white.

Charming and affectionate, tough, sober, brave, intelligent and lively, the Appenzell usually gets along well with other dogs and mixes well with livestock and household animals if it has become used to them while still young. They are rather unsure of strangers but greet family and friends effusively. A well brought up Appenzell Mountain Dog that understands his lower place in the human pack is fine with children. Loyal to the whole family, but tends to bond closely with one person, it responds best to firm, but consistent, even-tempered training. Socialize this dog well with all kinds of situations, people and other animals. Appenzells learn quickly, partly because they are so intelligent, but also because they really want to have something to do. This breed enjoys the outdoors, loving freedom and open spaces to run. Agility skill trials and games of catch are suitable sports for this breed. Potential problems arise when owners are not the dog’s firm, confident, consistent pack leaders displaying the proper authority over the dog. It is a natural instinct for a dog to have an order in its pack. When we humans live with dogs, we become their pack. The entire pack cooperates under a single leader; lines are clearly defined. You and all other humans MUST be higher up in the order than the dog. That is the only way your relationship can be a success. They need to be taken for a daily walk or jog to release mental and physical energy. Lack of leadership and/or lack of mental and physical exercise can cause a wide variety of behavioral issues, including but not limited to, obsessive barking, over-protectiveness/ guarding, destructiveness, and a high-strung, neurotic temperament. This working dog is not going to happily lie around your home like a couch potato. They do best when given a job to do. If you do not provide this for them, they will take it upon themselves to find a job and it will not be something you like. This breed makes a good watchdog. These are great dogs for the active outdoor type.

The Appenzell Mountain Dog is not recommended for apartment life. They prefer to live outdoors and should have acreage where they can run free, such as a farm. Appenzells that do not have acreage need extra attention to their mental and physical exercise needs. They like to bark, so they are not suited for areas with close neighbors, however giving them the proper amount of leadership and exercise can lessen their urge to bark.

The Appenzell does not belong in a busy urban environment or in the suburbs if you are not a very active jogging/fast walking type. It does best when it can live on a farm where it has room to run. Its strong herding instincts keep it from running off. It prefers to be outdoors and closely bonds with its territory. If it is not used as a working farm dog it must be taken for really long daily walks or jogs. If you can find work for the Appenzell and provide the leadership all dogs instinctually crave, it will be completely happy.

The Appenzell's straight-haired double coat is easy to care for and requires little attention. Just remove the dead hairs with a rubber brush from time to time.

There are two theories concerning the origin of the Appenzell Mountain Dog. One, that it is a native breed dating back to the Bronze Age, the other: it descended from the Molossus and was brought into Switzerland by the Romans. In any case it is one of the four Swiss Sennenhunds. The Appenzell is the rarest of the four. It is an outstanding herd dog, tireless and surefooted in the mountains. It is also adaptable to pulling a cart and is used to bring milk and cheese from the valleys to the merchants in town. It does not have a lazy bone in its body. When it is not working with the herd, it will guard its master's property with a natural enthusiasm. 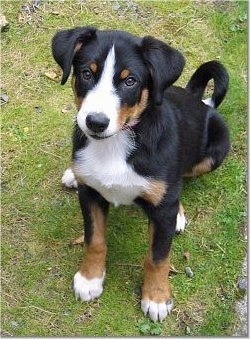 Milo the Appenzeller Sennenhund at 3.5 months old—when he is not sitting pretty, he loves to play soccer and Frisbee.