How can I stop my dog from guarding furniture? Why does my dog do this? 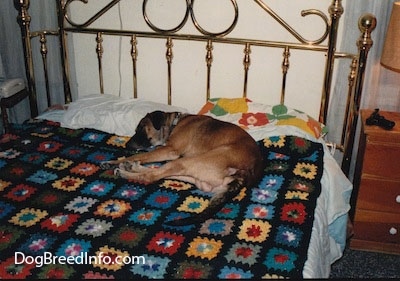 When a dog jumps up on a couch, chair, table, bed, stairs (whatever it may be) and growls when you come near him, touch him, or protest when you ask him to get down, the dog is telling you he owns it. This behavior must be stopped or this will most certainly lead to biting.

First, let’s look at what it means to the dog. When a dog behaves like this, he is telling you he owns that particular spot. A dominant dog will often seek out high places to watch over his domain, claiming the place as his own. He's communicating with you that he is the boss and he is demanding you respect his space. As anyone approaches they must ask permission to be there. The dog will growl, and eventually snap and bite, in order to correct YOU. He is telling you, as his subordinate, to leave the area, or to get his permission to be there. First comes growling, and later will surely come biting, because this is how a dominant dog communicates; they set a "rule." Your dog is not doing this because he is mean, he is doing this because he wants and/or thinks, he is the boss of your house. The top dog owns everything and makes the rules. This is a primal instinct hardwired into your dog’s brain. It is because of this instinctual behavior, when one owns a dog, the dog owns nothing. Everything must belong to the human, from the furniture to his toys to his food bowl. You, as his leader, will make all of the decisions. You, as the human, own the furniture, and you, as the human, will decide who can and cannot sit on it, and when.

When your dog, at his own free will, jumps up on a couch, chair, table, stairs, whatever he is claiming as his own, you are reinforcing his dominant state of mind. With every growl, snap or bite, the dog gets mentally stronger and more determined to KEEP his high spot and his high status in your family's hierarchy. The dog feels as if it is his throne. A status such as this cannot just be given to someone, they have to earn that seat and your dog is, in his mind, earning it. The dog is telling you he thinks the furniture is HIS and you'd better keep your place UNDER HIM. The dog needs to be shown humans are his pack leaders. He may have access to no chair, no couch, no furniture until all of his dominance issues are dealt with.

You and all other humans in the house must claim this spot as your own, making humans the pack leaders. Give the dog another spot in the room to lie on that is his own, such as a dog bed, blanket, pillow, open box or an open crate. Every time the dog walks in the room give him a command such as, "Go lie down," and direct him to his spot. Make sure the spot you are directing him to is lower (height-wise) than the area he was previously claiming.

Some very dominant dogs, particularly little dogs, just can't handle being on furniture without considering that as proof of their ownership of the space. If you have more than one dog, you need to set a no-furniture rule for all dogs. All dogs in a pack should be treated the same. You should not let one dog up on a couch and not another. Therefore if one dog needs to be kept off, all dogs must be kept off. If one of your dogs is not obeying, or is showing signs of dominance, you need to take control.

You do not necessarily have to ban your dog from the couch for life, but you must communicate to your dog when he is allowed to come up onto YOUR couch and when he cannot. If your dog, however, is already displaying this alpha role of protecting, you must ban him until he accepts you as his pack leader. After he has learned that the couch is YOURS, not HIS, then you can start inviting him back up. The most important thing to remember is, you decide when he is allowed up and you decide when he is to get off, by inviting him up and telling him to get down. You make the call, not your dog. Everything is on your terms, not his. If we humans want to live with an animal, we need to communicate like an animal.

Most dogs do not WANT to be the boss. There are very few dogs that actually want the alpha position, as the majority of puppies are not born leaders. Most are born followers. However even a born follower can assume the role of alpha dog, because a dog instinctually needs there to be an order, and if his human pack is displaying weak energy, and lack of discipline, his instincts tell him to step in and save the pack; there must be an order in the pack for the pack’s own survival.

Now YOU need to claim the furniture exactly the way your dog used to. (If you feel your dog will put you in danger by removing him, hire a professional to help you do this.)

Place yourself wherever your dog is claiming as his, for example, sit down on the couch with your arms and legs stretched out, making yourself bigger and covering more area. As the dog approaches point towards the area where he is allowed to lie (the area you chose for him) tell him to "go." Do not lean backwards, lean forwards because moving back is a sign of weakness to a dog. If he advances towards the couch, reach forward and use your hand like a claw, "biting" him in the neck. Hold the bite for a second and say, "No,” or “shhhtttt,” or “Aattttt" (whatever sound you choose). The dog should react by stopping or backing up. Snap your fingers and point away from the couch and say, "Go lie down." Do this without fear, anxiety, harshness or nervousness. Your dog can sense these emotions and will see you as weak. This will escalate your problem as it will make your dog feel an even stronger need to be your leader. Think Big and Powerful. Be calm, assertive and consistent.

If your dog jumps up on the couch while you are not sitting on it, take the dog by his collar and lead him off the furniture, with the same calm assertiveness. Say "down" and lead him to his new spot. Point to his spot and tell him to "lie down."

Depending on how aggressively your dog guards the furniture, and if you are afraid you are going to get bitten, you may opt to put a muzzle and/or a leash on your dog inside the house while you are working on this problem. When your dog jumps up on the furniture, take the authority role and move him off by using the leash to pull him by calmly approaching him, picking up the leash and popping it hard, and saying "down." Step in and use your body to block him from getting back up. Remember, lean forward, never back. Straighten up your shoulders and stand tall. Command him to the new spot you chose for him and tell him to "go lie down."

After you remove your dog, YOU guard the couch by blocking the dog with your body, using a sound such as "aatttt" or "sshht!" as a warning if he tries to move in, just as another dog would. Do not make eye contact. Look over the top of your dog’s head, not directly into his eyes. A dog will see a stare-down as a challenge and if you avert your gaze first, your dog wins. Point and send him away, "go."

When your dog is willingly lying in his new lower spot that you chose for him (such as his dog bed or blanket), you can toss him a treat. You can leave a treat on his spot once a day so he associates his spot with good things.

If you wish to have your dog up on the couch with you, and you feel like you have this problem under control, YOU may invite HIM up to YOUR spot. Call your dog by name and pat the couch, "up." The moment you see any signs of aggression or possessiveness, kick your dog back off and direct him to his spot on the floor. It's not that your dog cannot be up on the furniture, it just has to be on your terms, not his; YOU are the pack leader, not HIM. You own it, and he must earn the privilege of being on it.

Do not physically remove your dog. Your dog must move on its own.

Remember, there is no hiding our emotions from our dogs. They can, in a sense, read our minds in reading our emotions. This energy is the universal language of animals. Talk less, using more body language. Picture yourself, in your own mind, as big, powerful and very sure of yourself. Pull your shoulders back and stand up straight. Lean forward, not back. Your dog will feel this. This is your number one resource when it comes to communicating with your dog. Your dog will be happy and secure knowing he has a strong pack leader to care for him. Be consistent and strict with this rule and you will see a huge change in your dog’s behavior.

Showing your dog he is not your leader

How to correct this "Alpha Guarding" behavior in your dog, with the "Nothing in Life is Free Rule"

In the wild, dogs work for everything they have. This is instinctually built into them for their own survival. Dogs that work for what they have are happier as this instinct is being met. The only member of the pack that gets perks is the alpha dog, and since we cannot allow our dogs to be alphas, we need to make sure we communicate to our dog that we humans are the leaders. There is no other way to happily coexist with dogs than for all humans to assume this role.

Things you can do

By incorporating all these behaviors in his normal day your dog will realize that you, the human, are alpha over him and he is beneath you. Obedience exercises and classes are great and very useful, however, obedience training alone does not address pack behavior problems.