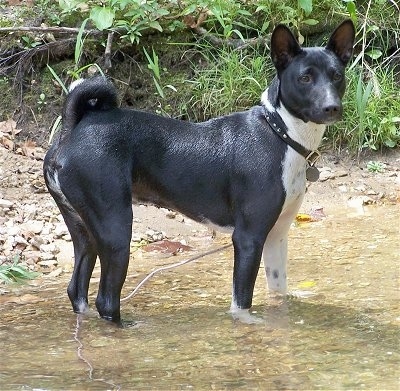 Perrin the Basenji at 1 ½ years old on a camping trip—"He hated the water, but would get in enough to get his feet wet."

Basenjis are smooth, muscular, athletic dogs on the small side. The head is wrinkled around the forehead and the muzzle is shorter than the skull, Which is flat. The small, almond-shaped eyes are dark hazel to dark brown. The ears are straight, small, erect and open in the front. The dog's back is level and the legs are straight. The tail is set high and curled over to either side. The coat is short, shiny and fine and comes in pure black, copper, red, chestnut red, or tricolor in combinations of black, tan and white, or black, brindle and white. The AKC standard calls for the dog to have white on the feet, chest and tip of the tail. White legs, blaze and collar are optional. The Basenji does not bark, but rather makes a yodel noise. It also howls, growls and crows, depending on the dog's mood.

The Basenji is alert, affectionate, energetic and curious. It loves to play and makes a good pet, as long as it is handled regularly from an early age. It is very intelligent and responds well to training with a strong desire to please. It can be reserved with strangers, so socialize well. The Basenji is somewhat reserved, but can still form strong bonds with humans. It should not be trusted with non-canine pets. It does best with children who understand how to display leadership toward the dog. The Basenji dislikes wet weather. It likes to chew, so giving it lots of toys of its own would be a good idea. The breed likes to climb and can easily get over chain wire fences. It has the unique properties of not barking (it makes a low, liquid ululation instead) and of cleaning itself like a cat. It can be described as speedy, frisky and tireless at play. Most Basenji problems usually involve a mismatch between owner and pet. The owners mistake the adjective "quiet” to mean inactive instead of noiseless; thus, they become harassed by an active, though relatively silent, dog. Basenjis need daily exercise to release mental and physical energy. Basenjis are very clever at getting their own way; they succeed less by obstinacy than by charm, and therefore need an owner who displays natural authority. one who makes rules and sticks to them. Calm, but firm, confident and consistent, Basenjis who have meek or passive owners, or owners who are not consistent with the rules will become demanding. The dog will assume the role of pack leader and behavior problems will arise, especially when left alone. An owner who understands canine behaviors and treats the dog accordingly will find them to be wonderful pets.

This breed is prone to Fanconi's syndrome (kidney problems), which must be treated the moment the symptoms are noticed. Also, it is susceptible to progressive retinal atrophy, intestinal and eye problems.

The Basenji will do okay in an apartment if it gets enough exercise. It is very active indoors and a small yard will do. The Basenji is happiest when it is kept with two or three other Basenjis; they will not fight among themselves.

The Basenji needs vigorous daily exercise. They have a tendency to become fat and lazy unless the owner is consistent about it. This breed needs a long daily walk.

4 - 6 puppies; female Basenjis come into heat once a year, whereas most other breeds are twice a year.

The Basenji washes itself like a cat and has no doggie smell, so very little grooming is needed. This breed sheds little to no hair.

The first traces of a dog similar to the Basenji are found in Egyptian tombs and wall drawings of five thousand years ago. Also called the Congo Dog, it was first introduced to England in 1937. English breeders refined it and exported it all over the world. In Africa the dog was used by the natives as a guide in the forest, to warn against the approach of dangerous animals, for pointing and retrieving of small game and driving game into nets. The first litter of Basenji puppies born and raised to maturity in the USA was in 1941 and the breed was first recognized by the AKC in 1944. 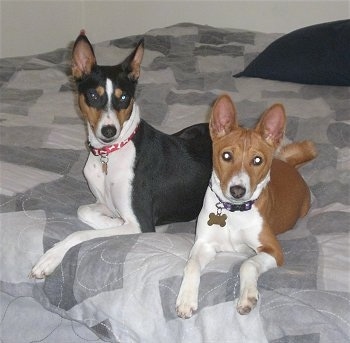 Basenjis—Gunther (tricolored) at 2 ½ years old and Pumpkin (red) at 8 months old—"I stayed at my nephews house for a few days and his Basenjis are the BOMB!! The little red one is named Pumpkin and the other is Gunther. They are sooooo sweet. Pumpkin slept with me on the couch with her head tucked under my chin. She is just sooo adorable and sweet. They are incredibly agile; very surprising for their small size. And very good at jumping tall things like couch backs (which my head was unfortunately on the other side of most of the time). ;) They are so awesome. Would love you to meet them sometime. Awesome little pups!" 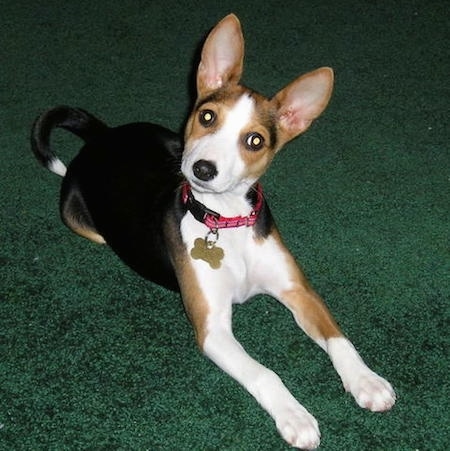 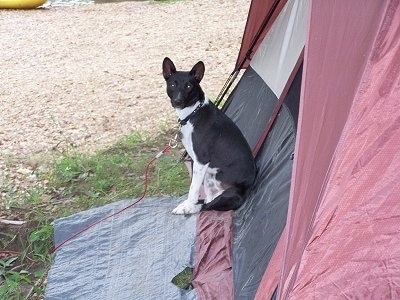 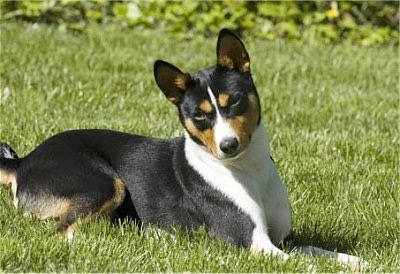 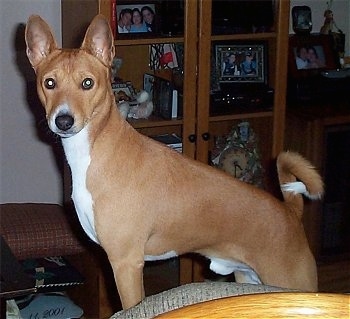 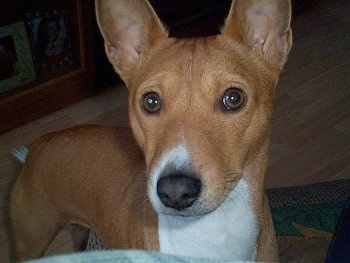 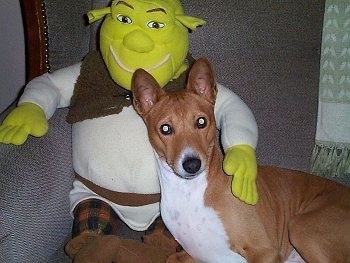 Benji the Basenji hanging out with Shrek 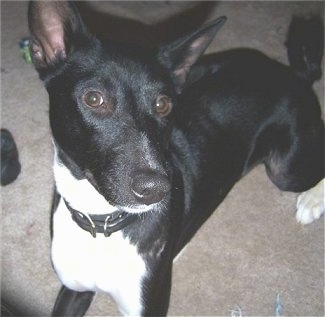 Perrin the Basenji at 1 year old 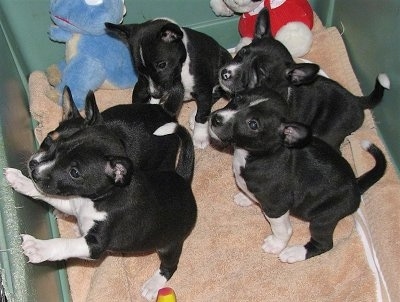 Hope the Basenji puppy at 6 weeks old with her littermates 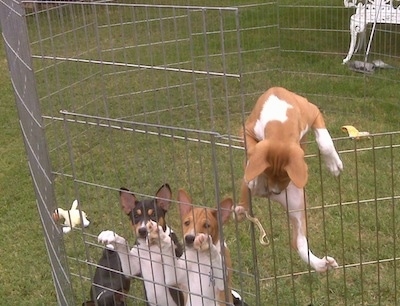 "This is EV, an 8 week old Basenji puppy being a very bad baby, but doing what Basenjis do best, escaping. This is one of the reasons Basenjis are not a breed for everyone. Besides their ability to climb fences well, they can also climb trees, dig under fences and jump over fences. They can also be very destructive in the house."

See more examples of the Basenji