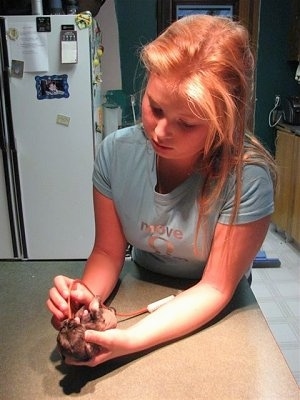 In 2005 a dam died giving birth to her pups. All of the pups died but one, however the remaining pup was dying as well. The puppy had a cleft palate. The breeder was unable to save the two-day-old pup on her own. Not wanting to see the pup suffer the same fate as her littermates, she took the pup to the vet. The vet took over with the breeder assisting, but they were not winning, the pup was not doing well. They were bottle feeding her, and her tummy seemed full, but she was fading. Three days had gone by; the pup was five days old. Afraid the pup was going to die at any time, the vet and the breeder decided to call Bev Dorma from MistyTrails Havanese/Mastiffs. They both knew if anyone could save the pup it was Bev and her family.

Realizing the bottle-feeding was leaving the pup with a tummy full of air, they started to tube feed the pup every two hours. Pictured is eleven-year-old Emily inserting the tube into the pup’s throat. Emily was born with her mother's natural gift of caring for puppies.

A puppy needs one cc of fluids for every ounce of body weight every 2.5 to 4 hours. 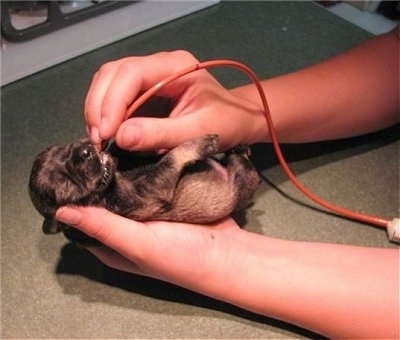 The tube is carefully inserted, making sure it goes all the way to the stomach, and doesn't stop short in the lungs. It is wise to mark the tube with a Sharpie marker, to know you are in all the way. If you are unsure, tube feed WATER first. (Do not try this if you are inexperienced without consulting your vet.) 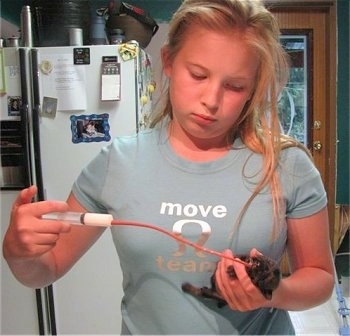 And the food is slowly fed. 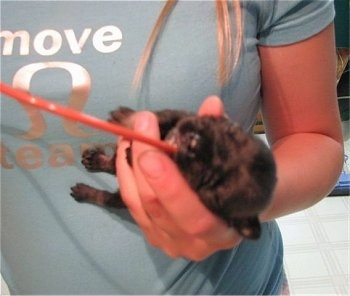 The pup was weighed daily to ensure it was eating enough and gaining weight. Every two hours this puppy was fed, around the clock. The foster puppy was named Tira. 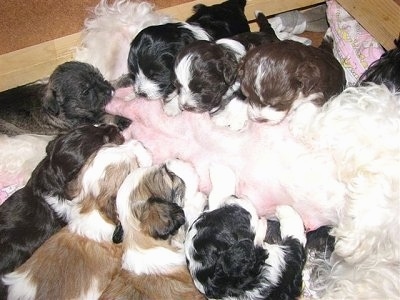 At five days old, Tira was added to a litter of Havanese puppies. She had tried to nurse, but got mostly air, and could not survive without human help. But what she did get was a foster mom to keep her clean, tend to her needs, and a litter to keep her warm. Whenever possible, with an orphaned puppy, it is great to find a foster mom or wet dam. When Tira was added to this litter, the hope was that the dam would take over. The dam readily accepted her and did everything she could, but Tira couldn't latch on properly for some reason. This photo is of Tira at four weeks old, the litter is 3.5 weeks old. She could nurse, but it would come out of her nose, and go into her lungs. She didn't get much. She could not survive without human help. The same thing happened when we tried to bottle feed her. Even at four weeks old she needed to be tube fed every three hours. She could, however, swallow soaked kibble whole. 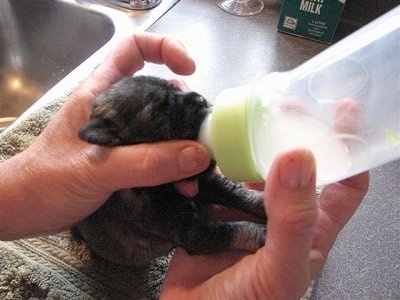 We tried to bottle feed her, but she slurped air, so we squeezed the sides of her mouth to the bottle; this helped to limit the air going in. Mostly we had to tube feed her (90% of the time) as she would get milk in her lungs which could have caused pneumonia. 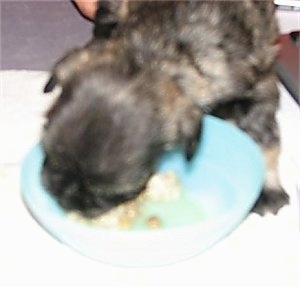 Four weeks passed and the pup was started on small amounts of solid food. 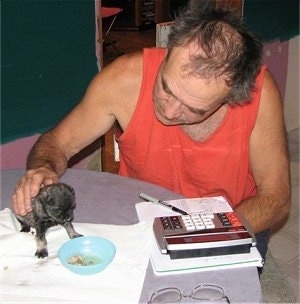 Stan Dorma looks after the tiny pup as he works. 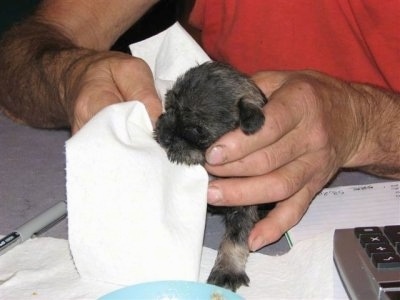 Cleaning the pup after a meal. 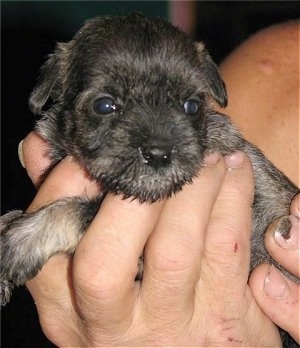 This little pups cleft palate was suspected because she had all of the symptoms, but it was not confirmed until she was scheduled to be spayed and was put under where the vet could get a better look down her throat. The cleft was very far back where it could not be seen easily.

Today Tira now lives with a very nice family who loves her.