Raising a Puppy: 14th week in his new home

A day in the life with Bruno the Boxer puppy. Bruno's 14th week—20 weeks old, 47 pounds, 21 inches from the ground to the highest point of the shoulders (the withers). 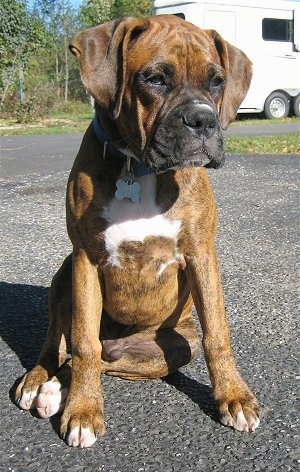 Bruno continues to do well on his walks. Although it had been a challenge to get Bruno to walk by another barking dog without him getting very excited and pulling toward the dog, I am happy to say he is getting much better with this. He has been learning to ignore and just walk.

Bruno went on a walk with a 17-week-old Shepherd puppy (and of course his older sister Allie). All dogs did well, however Bruno was a bit harder to walk with the other puppy (that another person was walking) because he wanted to play. A half-hour into the walk he settled down and walked much more nicely.

Bruno is just a pup with a lot of energy unlike my older dog Allie, who walks quite a bit slower. Allie the Boxer is 7 years old, has arthritis in both knees and has had two hip surgeries in the past. Therefore, while Bruno likes a fast pace, Allie needs a slower pace. In the beginning of our walks I feel as if I am constantly reminding Bruno to slow down with a short tug on the lead and dragging Allie along behind me, making her walk faster than she should. She seems a bit sore after a walk. 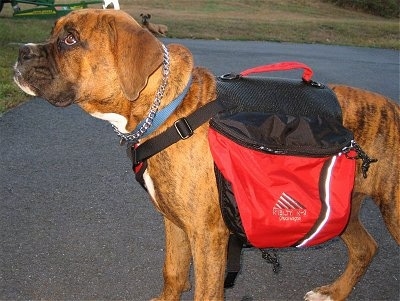 I went out and got Bruno a dog backpack to help slow him down and make his walks more meaningful. I put a couple of water bottles inside the pack for Bruno to carry. 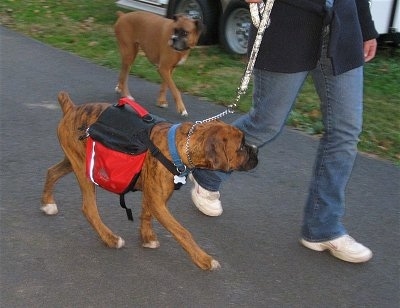 Bruno tries out his new backpack for the first time. His very first reaction was "Mommy put a brand new toy on my back!" and he turned to try and bite it. A couple of short corrections and Bruno realized it was not a toy and started to walk very nicely with it on his back. 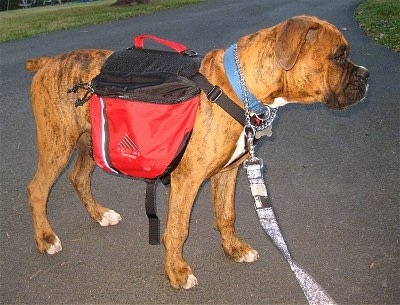 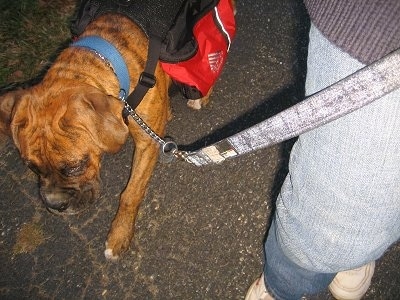 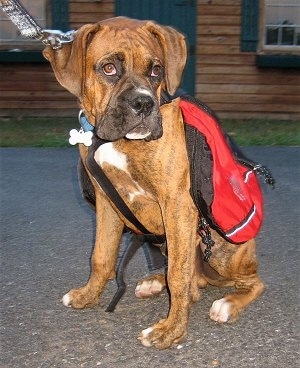 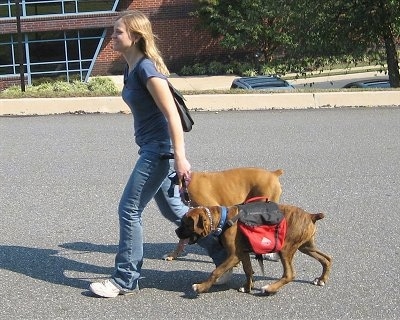 Bruno's first walk with his backpack, and boy what a difference! I put two 17-oz. water bottles in the pack, one on each side to even out the weight. Bruno appeared to be concentrating on carrying the pack and did not walk faster than his sister could keep up with. 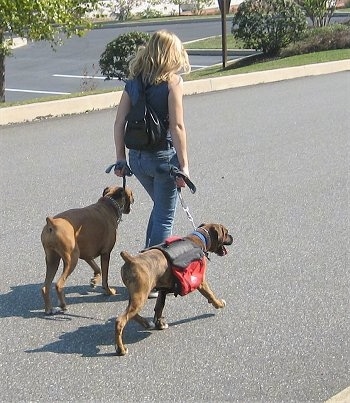 It's amazing how just a simple backpack can slow a dog down, giving them a sense of a job along with a better workout. Allie's also happier, as she can walk at her own pace.

Bruno and Allie after their walk. 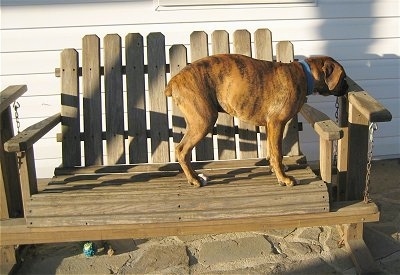 The only piece of furniture we allow Bruno to jump up on is the glider out on the porch. HOWEVER, he still needs to learn not to CHEW it! I was standing there when Bruno jumped up on it. He then started casually biting on it. "Aaaatttt!!" Bruno immediately stopped. He looked at me. Then he started chewing a different part of the glider! Once again, "Aaaatttt!!" Bruno stopped and looked at me once again. Dogs are all about the moment and what they are doing at the exact time of correction. I had told Bruno he was not allowed to chew the arm of the glider, so he decided to chew the base. He was not defiant, he just didn't understand when I told him “no” the first time that I was referring to the entire glider, not just the arm. 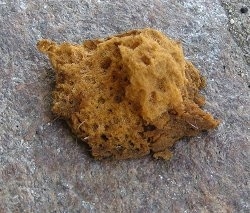 Remember the half a sponge I found last week? Well, I found another piece to it, which shows promise that Bruno didn't eat the sponge, just chewed it all up and spread out the pieces. 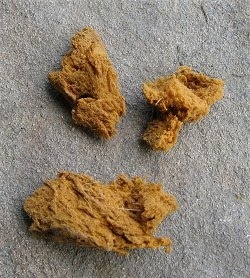 What happened to my puppy breath? 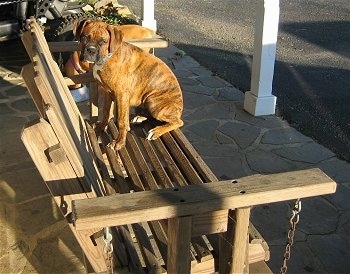 He looked so cute sitting there, so I went over and sat down next to him. Bruno gave me a big lick on the neck and YUCK, his breath smelled like a skunk! What were you into this time?!

The next day, when I bent down to hug my big, cute puppy, his breath smelled like dog poop! "Bruno, we do feed you plenty of dog food! Must you eat all that other crap?"