Raising a Puppy: 17th week in his new home

A day in the life with Bruno the Boxer puppy. Bruno's 17th week—23 weeks old, 54 pounds, 22 inches from the ground to the highest point of the shoulders (the withers). 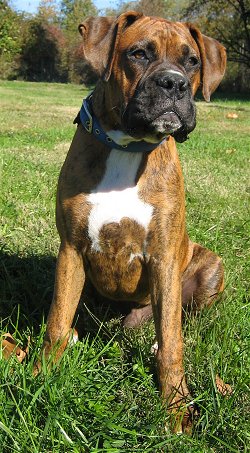 Bruno and Another Mouse 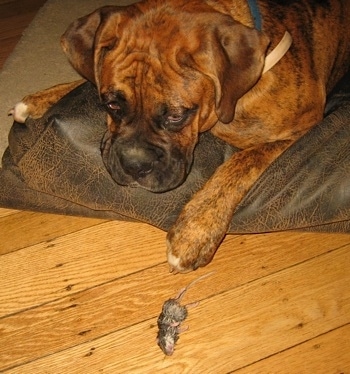 Bruno was outside, apparently with the cats again. We let him in and Sara yells, "Mom, Bruno has a mouse!" I respond, "Oh great, is it alive or dead?" "I think it's dead," she replies. "Take it outside." "NO, YOU!" she answers back. "Oh Bruno, we don't bring mice into the house!" I picked it up by its tail and took it outside, tossing it over the goat fence where Bruno could not get it again. On my way back inside I notice the cats chasing ANOTHER mouse! That mouse ran up a tree. We don't have a single mouse inside the house. Thank goodness for the cats, or we'd have loads of them inside. I just wish they'd stop giving them to Bruno! 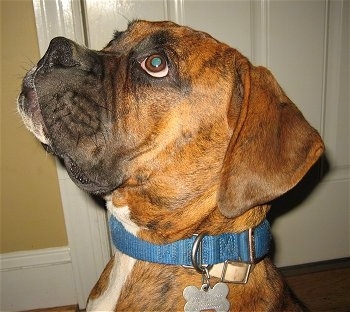 Bruno's collar is now too small once again. Time to get him a larger one.

This new collar should last him for a while.

Every weekday morning I leave Bruno unattended for two to ten minutes while I take my daughter to the bus stop. Bruno is usually a good boy; not enough time for him to get into any real trouble. Sure, once he knocked the plant over, but overall I don't notice anything bad that he's done. Today he was in a total "play" mode when I left. 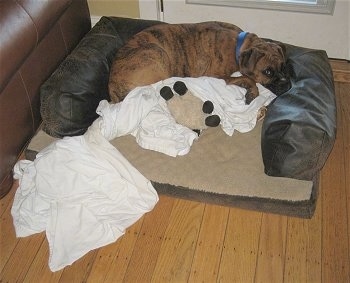 While he was not a bad puppy, he was so wound up he pulled his crate blanket out of his crate, then decided to take a nap. I can picture him being a spaz, then dropping like a baby. I was only gone for five minutes. Silly puppy... 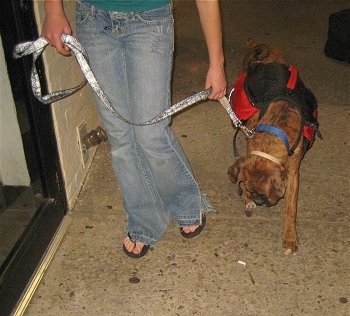 Bruno has started this nasty habit of trying to eat cigarette butts off of the ground. For some reason, a lot of people who smoke don't consider a cigarette butt litter. Well, I'm here to tell you folks, it is litter, and one of the only non-smokers that does not mind people tossing their butts onto the ground is Bruno. In fact, he's grateful, as he thinks they taste rather good. 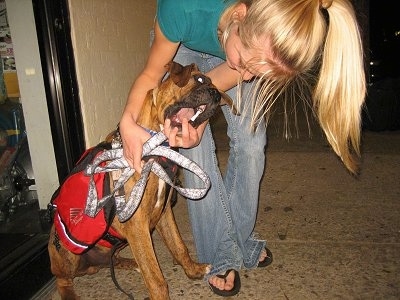 "Bruno, gross, drop that butt! This is the fifth butt I have taken out of your mouth tonight!" 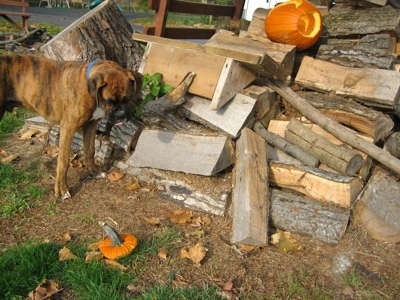 Bruno climbed up on the wood pile, knocked down the jack-o-lantern and began to eat the lid. "Hey! NO!" I put the lid back on and stood it back up. 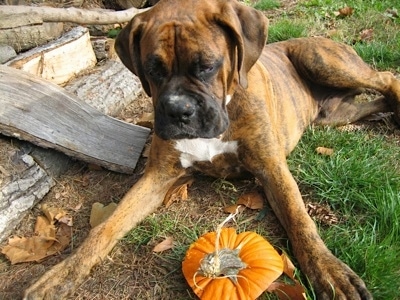 Later on the same morning Bruno did it again, knocked the jack-o-lantern down...

…and ate a good bit of the pumpkin. "Bruno, puppies are not supposed to eat pumpkins!" 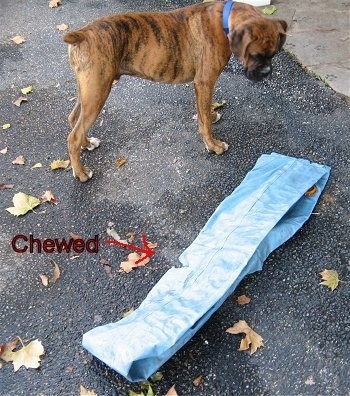 In all fairness, no one saw Bruno do this, however we suspect it was him. Someone squeezed under the pool fence (which Bruno does do) and chewed a hole in one of the pool cover weights. After the water drained from the tarp, the culprit dragged it up to the middle of the yard. We know it was not a cat; cats are not strong enough to drag a tarp. The kids, well I don't think they would chew a hole in it, and Allie, with her bad hips and knees, I don't think she'd have much fun squeezing under that pool fence. She also does not chew things. Hmmm...Bruno, did you do this??

Update: I caught Bruno nosing around the pool today. Not looking good for you, Bruno. You’re looking rather guilty. 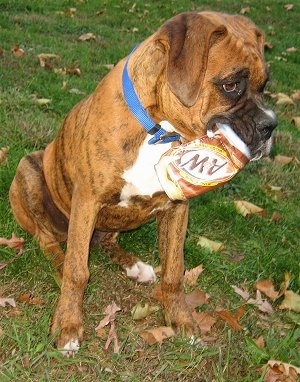 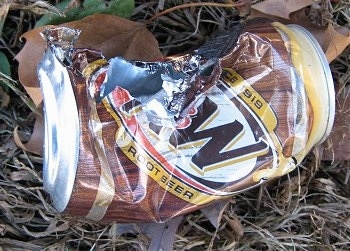 Update: I told my husband about the soda can Bruno had and he replied, "Do you mean that Coke can? Yes, I took that away from him." I told him, no, he had a root beer can. Apparently Bruno had two cans yesterday. According to my husband, Bruno retrieved them from the cup holder of the Gator, which was being used by the worker. Bruno is outside right now hanging with the same worker. Hope he behaves himself today. 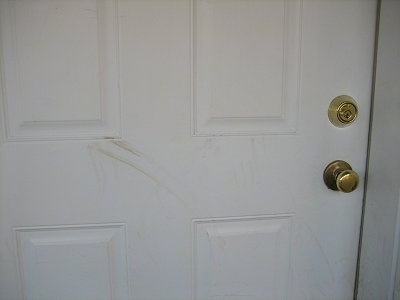 While I didn't see Bruno do this, I heard it. It was cold outside and Bruno wanted to come in. He decided to jump up at the front door. This is a new behavior. I need to figure out how to stop him from doing this. Not an easy task since I am inside the house and he is outside.