Raising a Puppy: 18th week in his new home

A day in the life with Bruno the Boxer puppy. Bruno's 18th week—24 weeks old, 57 pounds, 22 ¼ inches from the ground to the highest point of the shoulders(the withers). 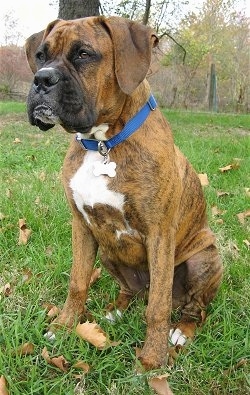 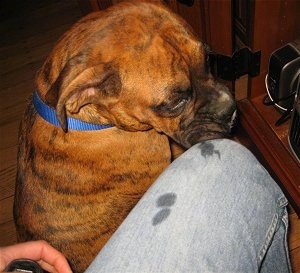 Oh Bruno, you just drooled all over my leg. Does this mean you’re going to be a drooler? 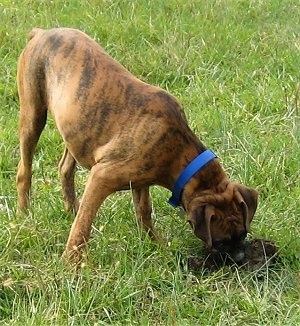 Hey! NO! Don't eat that pile of horse poop! YUCK! 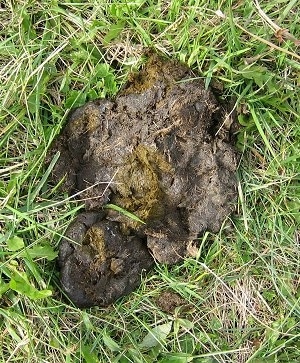 This does NOT look tasty to me. Gross, Bruno!

Barking at the Door

When Spike the Bulldog died, we realized it was Spike who always barked at the door or cars coming down the driveway, which got Allie, our Boxer barking. After Spike died, Allie stopped barking at cars coming down the driveway and knocks at the door. While I don't want an aggressive dog, I do want a dog who alerts me. There are not any houses close to us, and it’s pretty alarming to look out and realize there has been a strange truck in our driveway for heaven-only-knows how long and I have no idea where the person who owns the truck is. Spike always barked and we'd look outside. We have been really missing a dog that barks to alert us of strange things outside the house. Therefore, we have been working with Bruno in getting him to bark when cars come down the driveway etc.... The UPS truck came down the driveway and lo and behold, Bruno actually barked, which got Allie barking. I let the dogs outside and they greeted the UPS guy with their normal happy nubby wags. What a good boy Bruno, bark, but be friendly, just like Spike the Bulldog used to be.

I was watching YouTube clips. Bruno heard a dog barking inside my computer and began to bark at it. I could not help but laugh at him. This is the same bark he had when the UPS truck came down the driveway.Bruno Barking at YouTube Clip.

While we want Bruno to bark, and at times will not mind him barking, I am completely confident that I can get him to stop barking if we want him to be quiet, just as we were able to tell Spike when it was OK to bark and when it was not. Spike would bark at strange noises and cars outside, but when we told him to be quiet, he'd stop. I realize Bruno is not Spike, however they are both dogs, and I believe it has more to do with the way we communicate with the dogs than the dogs themselves. Bruno is going to be a good alert dog. After Bruno has heard the same barking dog clip on the computer a few times, he no longer pays any attention to it.

Update: I played a different clip with an aggressive dog barking. It was late at night and everyone was sleeping. Bruno barked..."Ssshhhhttt." Bruno looked at me, but didn't fully understand what I wanted. I had never told him to stop barking before. He let out another small bark. I called him to me so he would be closer and easier to correct. I waited a few seconds so he would not associate me calling him with the correction, then I hit play on the clip again. When Bruno let out a muffled half-grunt, I reached behind me and touched him "Ssshhhhttt!" I did that two more times, then Bruno lay down and ignored the sounds of the barking dog. It's all about communication and getting him to understand this is not the time to bark. The more I practice that with him, the easier it will be to tell him when it's OK and when it's not. 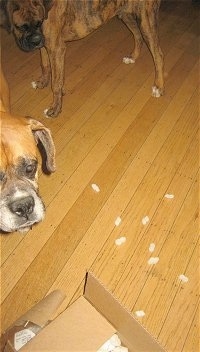 A package came via UPS. When I opened it, some Styrofoam peanuts spilled out onto the floor. Bruno very enthusiastically dove for a peanut, scooping one up in his mouth. Immediately, without hesitation, I moved toward him and used my fingers to bite him. "Drop it!" He looked up at me. I took another step toward him and bit him again, "Drop it!" Bruno spit the peanut out. I wanted him to spit it out, rather than me taking it out of his mouth, because I feel if I take it out of his mouth he won’t fully understand the peanut is not for him to eat. By the same token, I had to MAKE SURE he dropped it and didn't swallow it while I was telling him to drop it. Since Bruno was pretty intensely focused on the Styrofoam peanuts, I needed to match his intensity in order for him to take me seriously. Swallowing Styrofoam can be dangerous. 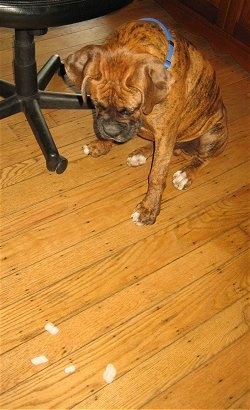 Bruno walked away from me and the box of peanuts and sat down. This was good, he was leaving the area, but I decided to test him out just in case. Behaviors can only be corrected when they are confronted. I went to him and threw some peanuts on the ground in front of him. What a good puppy; he just looked at them. That look of intensity toward the Styrofoam peanuts was gone and he understood they were not for him. They were MY peanuts. Now to try this out on him the next time we go for a walk and he picks up a cigarette butt!

Cat Tags Along on a Walk 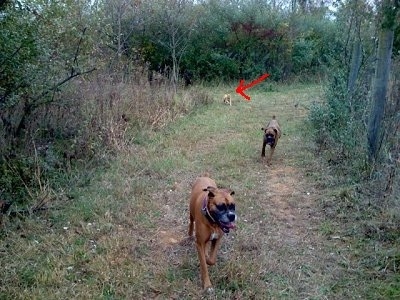 On the days we take a hike in the woods we often have a visitor or two. Notice Sandy the cat running up in the rear. 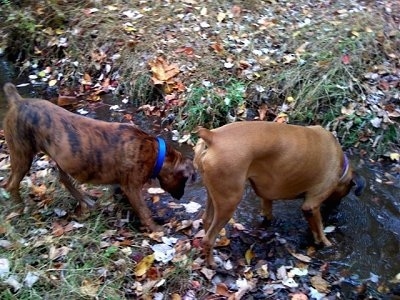 Stopping at the stream for a drink, but where's Sandy? 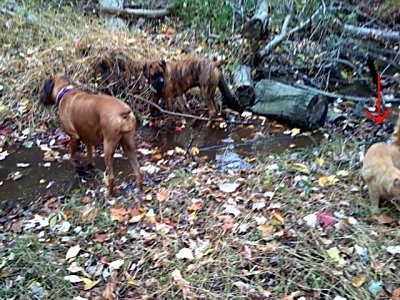 Oh yes, there he is :) The cat that enjoys long hikes in the woods.

Taking into consideration Bruno is a 6-month-old pup, he walks fairly well on a leash. However, if I compare him to my 7-year-old Boxer, well let’s just say she makes him look bad. I never have to remind Allie to slow down; she seems to prefer walking beside or behind me. Bruno does not mind the idea, he is just easily distracted; he's got places to go! I feel like I am constantly reminding him with a tug to slow down. Using the dog backpack helps a lot, however I decided to give the Illusion dog training collar a try. 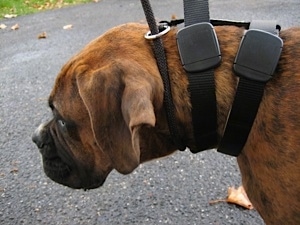 The idea of the collar is to keep the leash at the very top of the neck, just like you see them do in dog shows. The collar worked very well. I was able to communicate to Bruno to slow down with very little effort, just a little tug.

Note: this collar is not recommended for dogs whose necks measure less than 13 inches at the base, or weigh less than 18 lbs. Dogs with any breathing problems, such as "pushed-in faces" that restrict breathing; dogs with trachea or throat problems, such as Pomeranians; and dogs with elongated, overly slender necks, such as Greyhounds, should NOT use the collar. The collar was also not intended for dogs under the age of one.

Bruno weighs 57 pounds and his neck measures 17 inches at the base, so I, as his owner, made the call to use the collar. I am very pleased with the collar and how much easier it is to walk Bruno with it on.

Bruno and his Toys 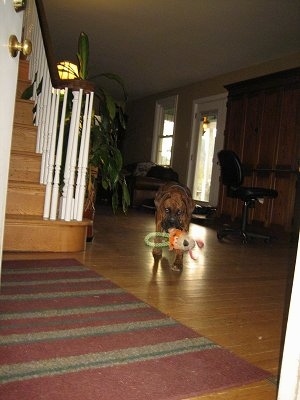 Bruno really enjoys his toys, especially ones that squeak or rattle. I am having a lot of fun buying him toys because we could never give Spike the Bulldog any type of toy besides a real bone, such as a cow leg. We could not give him rawhides; he'd tear the toy to bits and eat them and he'd eat an entire rawhide in an hour. Not good for a dog. This is Bruno and his new rattle-sounding tiger toy, a toy I don't want him bringing outside, as it's going to rain tonight.

Bruno came to the door with the toy in his mouth. "Drop it." Bruno dropped the toy, but picked it back up right before he was about to go out the door. "No, Drop it...Drop it." Bruno dropped the toy…then attempted to pick it up right before going outside again. I said "Aaaatttt" right before he touched the toy. Finally, it had sunk in, he was allowed to go out, but not with the toy. Good boy, Bruno. I called him back inside the house and tossed the toy across the room. He pounced on it. "Bruno, Outside." Bruno looked at the door, then dropped his toy, looked back at the door, looked at his toy, then went outside without it. What a good puppy...

Bruno has been doing very well with housebreaking. He has not peed in the house in over a month (he has actually never pooped inside amazingly enough). He walks to the door when he has to go outside. One could say he really understands the inside of the house is not for eliminating.

It was dark outside and I was driving. Bruno was in back with my older Boxer. I heard a noise that sounded like someone was dumping out a cup of water onto my floor. Oh no, couldn't be! Could it!? I said the only thing I could think of, "Bruno!!!" The noise stopped. I was not able to turn around and look so I was not sure yet, but then I smelled it—dog pee for sure! Oh shoot! You darn puppy! I pulled over and cleaned up what I could with the few paper towels I had with me.

One thing I know I did wrong was I used Bruno's name when correcting him. To name something is human. To my kids, I am "Mom." To Bruno, I am a smell and an energy. Bruno does not look at me and think, "Hey, there's Mom." He looks at me as a certain smell and energy, then by sight, then there is a word that he has learned to associate with me. Just as he has learned the word "Bruno" is associated with him. Therefore, if I use his name when correcting him, he will associate his name with negativity. His name should only be used for something positive. For example, I should have yelled, "Hey!" when I realized he was peeing. This is one reason why some dogs do not come when called by name; their name (word) has been used when something negative has happened. Needless to say, I will be working on this habit of mine. 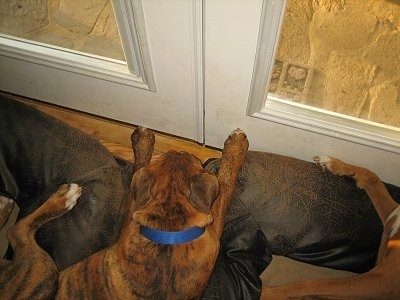 I heard a strange noise coming from Bruno's direction. Bruno was chewing on the bottom edge of the door! "Hey!" Bruno jumped, I had startled him. He'd been so focused on chewing the door, he didn't hear me coming. Bruno stopped chewing on the door. To him, a teething puppy, it was just a convenient place to chew and another place I never told this pup he could not chew. Now he knows. Hoping he'll leave it from now on. I can only imagine how much trouble he'd get himself into if I left him alone in the house for long periods of time. There are so many things off-limits that he simply does not know about yet.