Raising a Puppy: 19th week in his new home

A day in the life with Bruno the Boxer puppy. Bruno's 19th week—25 weeks old, 59 pounds, 22 1/2 inches from the ground to the highest point of the shoulders (the withers). 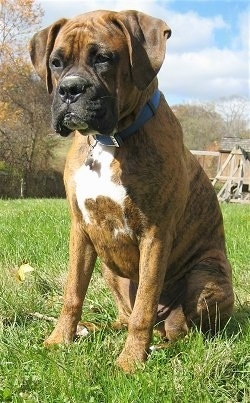 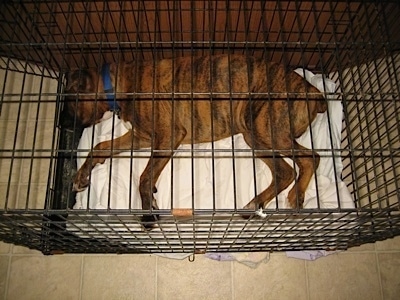 Oh Bruno, you went and did it again. You outgrew your crate. You can barely move in there. Time to switch to a larger one. 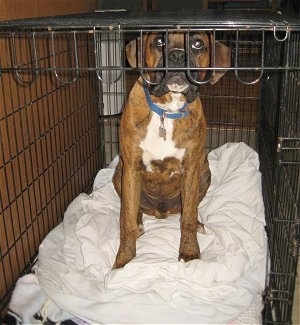 Yep, a little too tall for this crate! 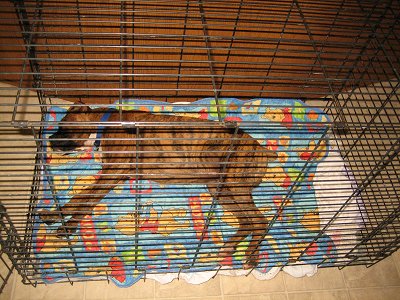 Much better, now he can stretch out. When Bruno first went into his crate, I was leaving for an hour. I gave him the "Cage" command as usual. He walked to the normal spot and went into his crate. He had not expected there to be a larger crate in its place. He started smelling it then he began to dance around like a playful puppy. I gave him a bone to chew. When I got back to him he was lying down as usual. I believe he likes his new crate. 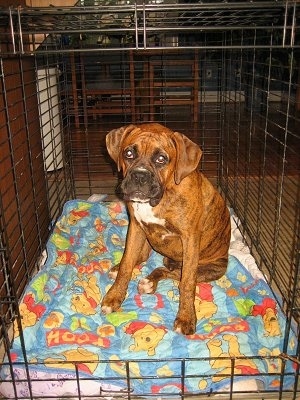 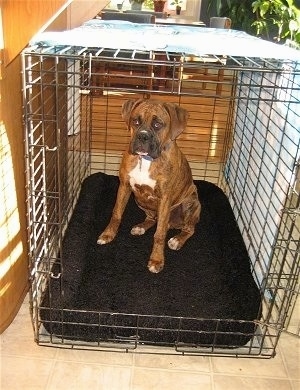 Recently Bruno's been pulling the bedding out of his crate and playing with it. So when I bought him a new bottom mat for his crate I knew I had to watch him. Sure enough, after only ten minutes he went into the kitchen and proceeded to try and drag the mat out of the crate. "Hey! NO!" Bruno dropped the matt and looked up. Now I wait to see if that was a good enough correction to make him understand not to remove the mat.

Nope, not good enough; as I was typing this I heard Bruno in the kitchen, so I went to check. I watched for a minute and saw him pick up the mat again. "HEY!" Bruno dropped the mat. I am not sure my timing was right. I believe I was a few seconds too late in the correction. I need to catch him just as he is about to pick the mat up or at the exact moment he first gets his mouth on it in order to make him understand. 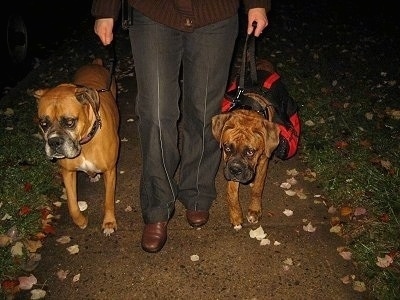 Between the back pack and the Illusion collar, Bruno is walking very well. He no longer barks at other barking dogs, and most of the time ignores them. He's getting very good at not pulling on the lead. It usually only takes one tug and he remembers to pace himself with me. 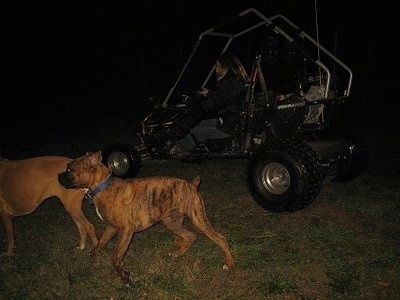 Going for a late night go-cart run! Bruno and Allie like to run along as we drive through the fields. 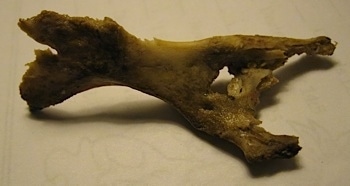 The things Bruno finds! I don't know what kind of bone this is, but Bruno was chewing on it. He found it outside somewhere. "Drop it." Yuck, it was all slimy. 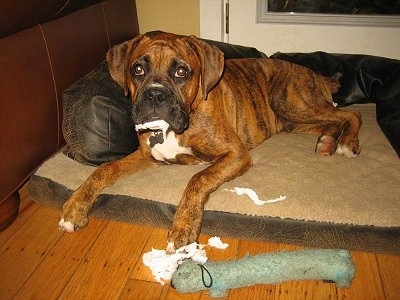 Bruno came dashing into the living room like a kid running into a candy store. He was happy about something. I looked over at him and there was something white hanging from his mouth! Bruno! What did you do this time? 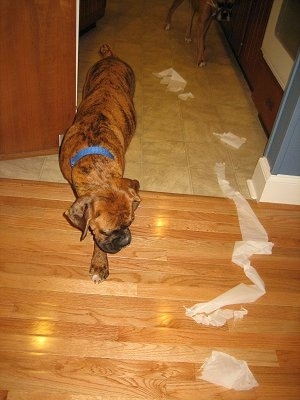 Now, Bruno, you can pretend Allie was the one who got into the roll of toilet paper, BUT, not only has Allie not done something like that in over six years, you had the evidence all over your face, and there is still some stuck to your lip! 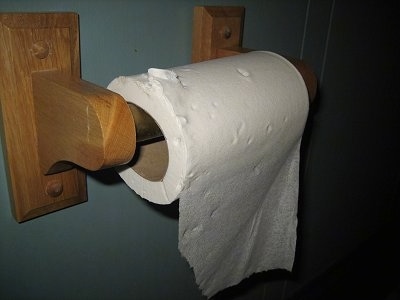 Yep, the teeth marks match up! You’re one busted pup! What's wrong with this picture? You guessed it, that's not his shoe and we didn't give it to him. He carried it to his bed. Funny thing is, recently he has been carrying them to his bed, but does not chew them. I have caught him chewing on shoes and have corrected him. I have never caught him just as he picked up the shoe. Coincidence? Not 100% sure. I don't want to jinx myself by stating he will never chew a shoe again! I know I do need to catch him right as he is picking up a shoe in order to get him to stop taking them to his bed. I'd like to think he has now learned he is not allowed to chew shoes. Time will tell. 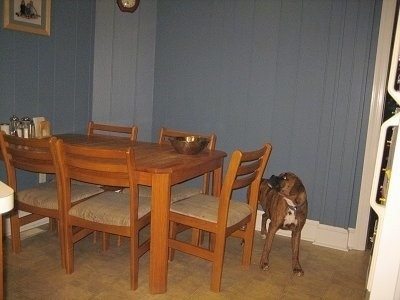 I was in the bathroom and as I exited I noticed Bruno next to the kitchen table eating something, and it dawned on me that I also heard a thud. I said out loud, more to myself than to him, “Don’t tell me you just did what I think you just did.” Now I didn't see him and I cannot prove it, but by the way Bruno kept looking up at the bowl of popcorn while circling the kitchen table, I am pretty sure the little sucker had jumped up and ate some popcorn from the bowl. How else would he know there was something worth staring at on the table? We often have things on the kitchen table and this is the first time he's been this interested. I quietly stood there and waited for him to do it again. However he just kept looking up at the bowl and then back at me. 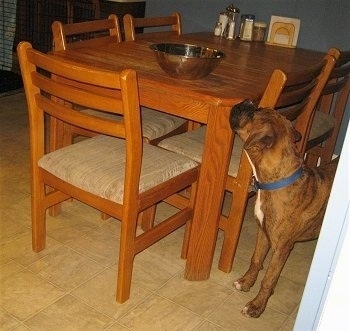 I realized I could also correct him when he looked up at the bowl, since he was THINKING about jumping up, or at least thinking about that yummy popcorn. I decided to correct him for looking with a touch to his neck and a "no." Bruno stopped circling the table then went and lay down. If you can tell your dog is thinking about doing something that is off-limits, you can effectively correct him at the moment you know it crosses his mind. Now Bruno, that marker is NOT one of your toys! Time to take you out for another walk.