A day in the life with Bruno the Boxer. 1 year, 4 months—88 pounds, 24 1/2 inches from the ground to the highest point of the shoulders (the withers). 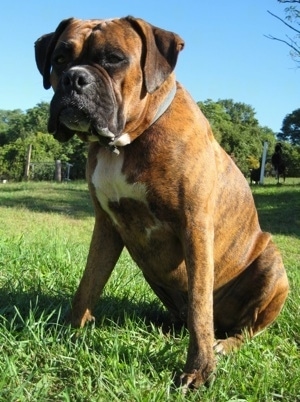 Darley, the Beagle mix came over to play with Bruno and Allie for a few hours. Darley is now 9 months old and has been developing a skittish fear, barking at strange objects. Not people, but random objects, such as trash cans or anything that is new. She barks at it then is afraid to actually go up and smell it. She tends to hide under something and bark and growl from inside her hiding place. This is a big no-no as this type of behavior can lead to fear biting. Not to mention the stress it puts on Darley to be so fearful. Darley's owners have been working with her and she has gotten much better. Amie and I worked on Darley's issues while she was here. The fact that Bruno and Allie were so calm and well balanced really helped Amie and I help Darley. Dogs feed off of one another's mental state. 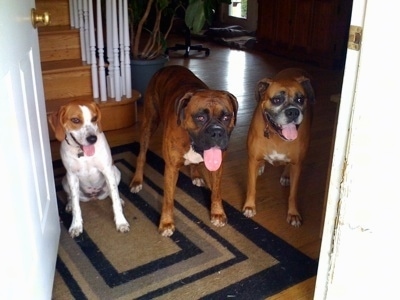 First things first, time to establish who is pack leader.... We practice going in and out of the house, making all dogs wait until all humans have passed. At first Darley wants to bolt outside, but quickly realizes she is not allowed, not until we tell her she can. She did extremely well considering there were cats on the porch looking at her. 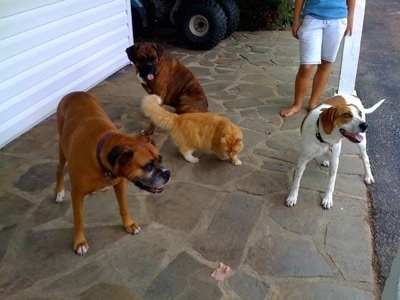 Next we practiced a huge discipline. All three dogs were told to “leave it” as ham lunchmeat is dropped in front of them. 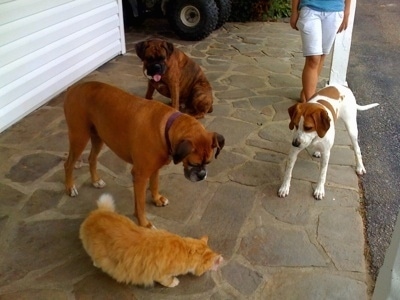 Oh now talk about discipline. The cats come and eat the ham right in front of the dogs. "Dogs, leave it!" 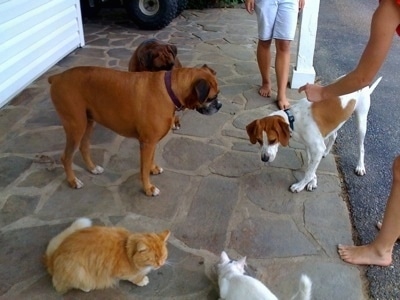 Darley tries to go for it, but is quickly corrected by Amie. "Aaaatttt!" Darley passes; she respects the cats as her pack leaders. They ate first and the dogs are rewarded with a small piece after the cats have finished. 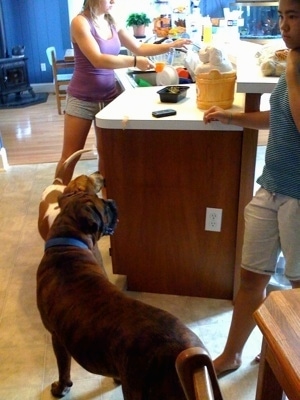 Katie was cooking lunch when Darley decides to jump up at the counter. "Hey. Down!" She steps toward Darley and Darley quickly jumps down. Hmmm, was Katie's correction enough? Time to find out. Amie lays ham over the edge of the counter and we wait. 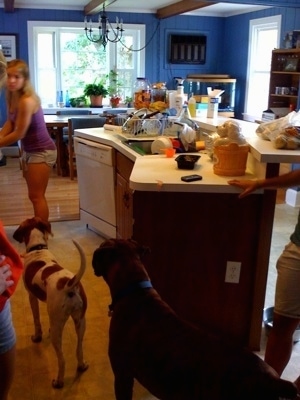 Darley passes once again! She sees the ham, but is not about to jump up at the counter again, not while we are standing there anyway. We all left the kitchen, forgetting about the ham. After a few minutes we realize Darley is in the kitchen... Amie runs in to see if she snuck the ham. NOPE! She was a good girl and didn't even try while she was alone. 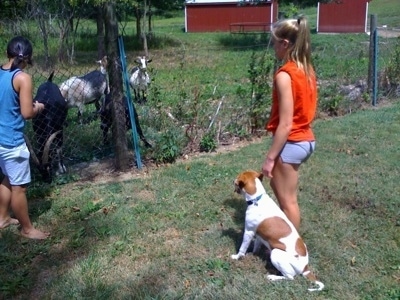 We are across the yard when Darley spots the goats and begins to growl. I was standing next to her and corrected her,"Hey, No!" No response from Darley, she continues to growl, eyes fixated. I 'bit' her in the neck with my hand, "AAtttt!" No response, Darley continues to fixate on the goats, growling. I bit her again, nothing. Amie chimes in, "Mom, not like that, like this..." She comes over and does exactly what I just did, only her intensity is stronger. Darley's gaze is broken; she turns her head, no longer fixated on the goats. Darley turns her head back and lets out another growl. Amie corrects her again, matching Darley's intensity. Darley's gaze is broken once again.

Amie takes Darley by the collar and leads her toward the goats. Darley wants to flee. She's afraid—fear induced aggression. This is a behavior that definitely needs to be addressed. If let to continue, Darley will most certainly turn her fear from growling to biting. Amie makes Darley sit in front of the fence, and I walk over and pull her tail out from between her legs. The tail between the legs is a sign of skittish fear. Psychologically, Darley will get over this quicker if her tail is not tucked in. 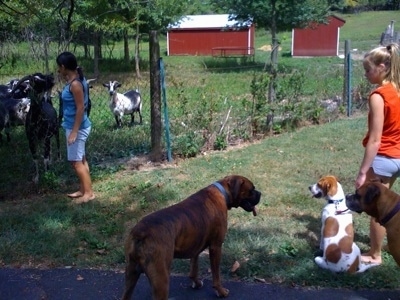 Darley tries to flee a few times, so I watch over Darley while Amie fetches her leash. Every time we hear a growl or she starts to flee, she is corrected with a tug, otherwise we ignore her. We make sure her tail is not tucked between her legs. 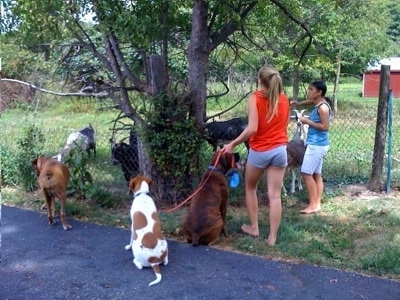 After a few minutes Darley relaxes. 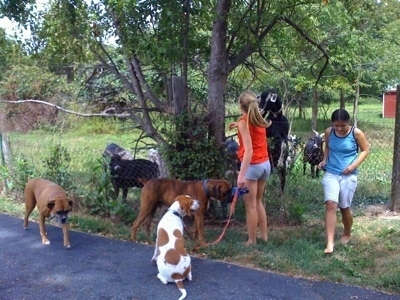 She is no longer growling, no longer trying to flee. 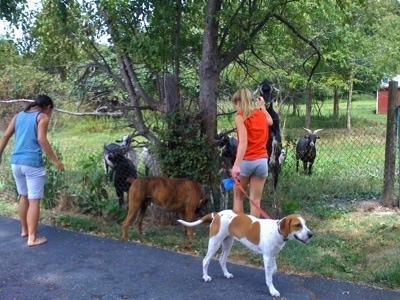 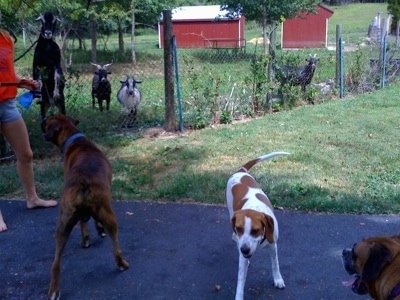 Seeing Darley has just gotten over her fear of the goats we unsnap the lead.

Bruno and the Cigarette Butt 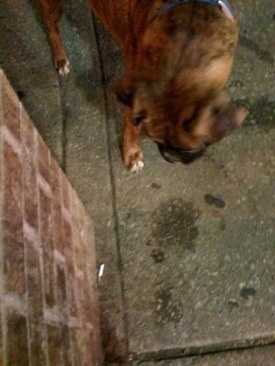 After one of Bruno's hour-and-a-half walks through town, we stopped outside of a shopping center for a bit. Bruno kept glancing down at a cigarette butt that was on the ground. He was not fixated as he used to be in the past, just kept looking down at it, so I waited. Sure enough, after ten minutes of glancing down at it, then looking away, then back down he attempted to lick it up. I tugged on the lead along with "Hey!" Bruno decided to leave it and stopped looking at it. He still loves to eat them, but he's so much better than he used to be. It's no longer his mission in life; just something on the side he may try if the moment strikes him.