A day in the life with Bruno the Boxer. 1 year, 7 months—96 pounds, 24 1/2 inches from the ground to the highest point of the shoulders (the withers). 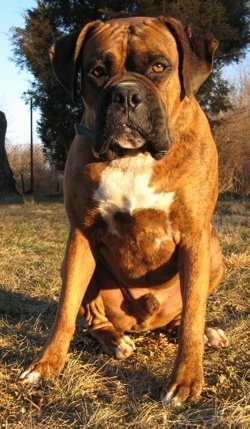 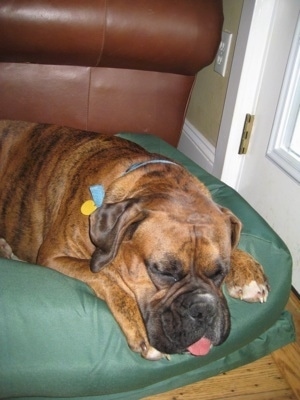 Bruno after one of his long walks. That tongue never seems to fit into his mouth.

Bruno is such a good boy. Seriously. He has turned out to be the best dog I have ever owned. He is excellent with children, does not jump on them. Heels very well on a leash, even for a small child, never even wanting to pass the human. Is always willing to perform tricks for the kids. A real pleasure to walk. Knows the "wait" command very well. When in the car he will not jump out until given the command. Will stop in his tracks if we ask him to, even if he is on the hunt of an animal. Waits for humans to pass through doorways before he even tries to go, heck he even waits for cats to pass first. Is excellent off leash. Walks away while his food is being prepared, the utmost respect a dog can give to the higher members of the pack: to give space when food is around. If Bruno is eating and a cat comes to his bowl, he will leave and allow the cat to finish before going back to his food. He accepts the cats as alpha over him. If Bruno picks something up in his mouth and we say "Drop it" the object drops on the ground instantly, or as long as it takes for him to spit it out of his fat mouth. If we say "Leave it" he leaves whatever it is alone. Even if it is food. Neighbors have called us asking for help with their own dogs and we have brought Bruno with us, even for aggressive cases. Bruno was excellent. He had confidence in the humans and never tried to dominate the dogs himself. We can open the front door and tell him the wait. He only goes when we tell him to. As submissive as he his, he still goes into guard-dog mode if he sees or hears something outside that he feels is just not right. There is no doubt in my mind that he would protect his family if he felt a person had bad intentions. Yet when he is in this guard-dog mode we can tell him to be quiet, even with just a hand signal and he will stop, watching us very closely for our next command. Very in-tune with the humans around him. Check out "dogbreedinfo" on YouTube for clips of Bruno, then to see more of his younger years do a general search for "Bruno the Boxer."

But is my boy perfect? NO, my boy is SO BUSTED! What you see below is a web cam that points up the driveway from the front window. That is a golf cart parked on the porch. These pictures appear in the order they were taken by the camera. 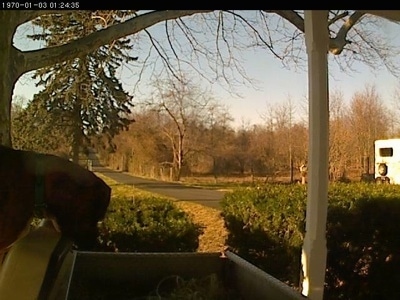 This is Bruno on the front seat of the golf cart. 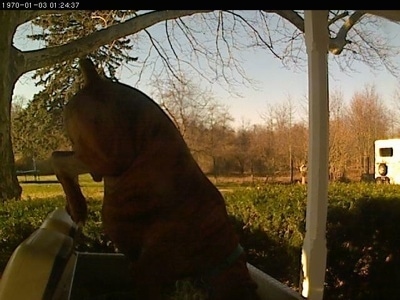 This is Bruno jumping into the back of the golf cart. 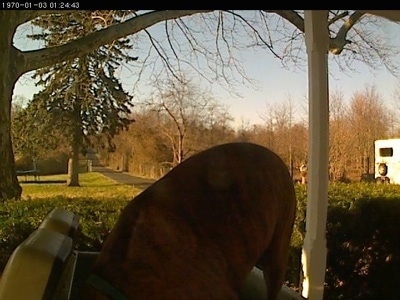 Bruno checking out what's in the cart. 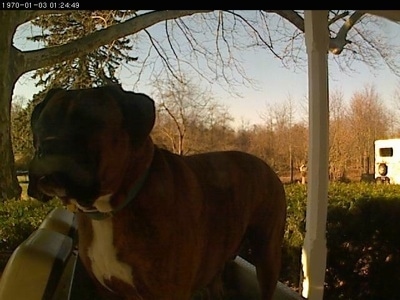 Bruno peering into the window. Note: there is no human on the other side, just a camera taking pictures. 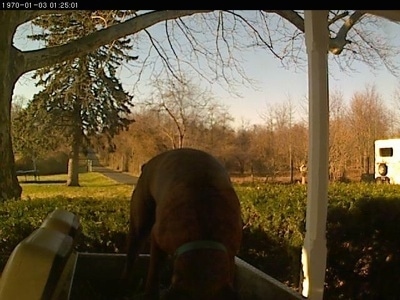 Bruno, just what are you doing? 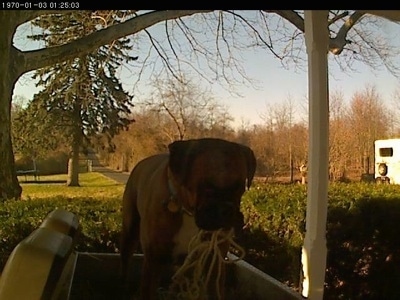 BUSTED! Bruno is picking up some rope that is in the back of the cart. This explains why there are things in the yard from time to time that the kids swear up and down were in the golf cart, not left to lay out in the yard. 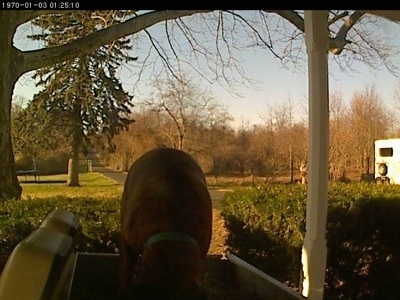 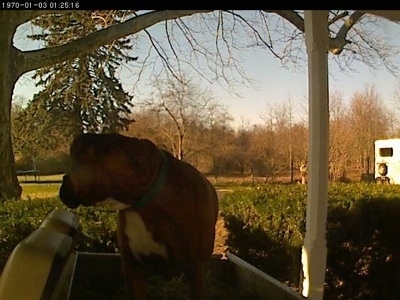 Bruno looking around. This is all the camera took for the moment, but it proves my boy does like to jump in the back of the golf cart and steal things. We have never caught him to tell him "NO," but he is still so BUSTED! Gotta love that pup! 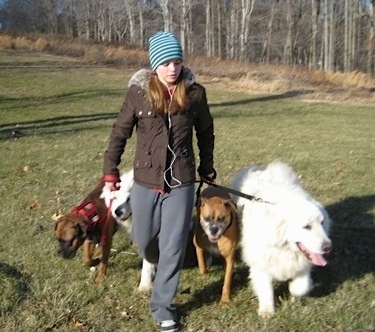 Remember those awful fights Allie the Boxer used to get into with the Great Pyrenees, Tundra and Tacoma? Take a look at them now! 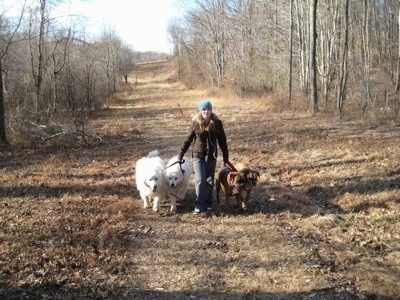 Taking Allie for pack walks with the Great Pyrenees has made a world of difference. There are no more fights, no more looks, no more avoidance. They have now accepted one another. Walking these four dogs is a real pleasure. Amie out on a pack walk with the Great Pyrenees, Tundra and Tacoma, and the Boxers, Bruno and Allie. No hands are needed. The dogs do not even try and get in front. A little more than halfway through the walk Allie started limping on her bad knee and we had someone come and pick her up to give her a ride back home. Allie loves the walks but is not quite able to go for very long ones. We are hoping she continues to get better after her stem cell therapy. Bruno decides to lick Tundra in the mouth. I think he was thirsty! YUCK!