Raising a Puppy: 22nd week in his new home

A day in the life with Bruno the Boxer puppy. Bruno's 22nd week—28 weeks old, 66 pounds, 23 1/4 inches from the ground to the highest point of the shoulders (the withers). 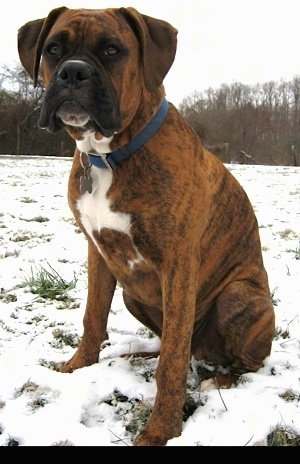 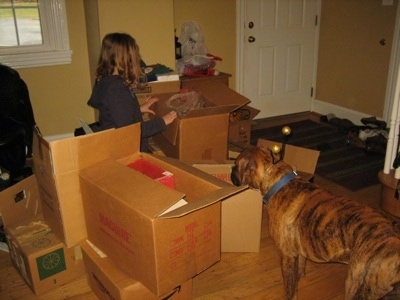 It was time to decorate the Christmas tree. Bruno had never seen so much new stuff in the house at one time. He was one curious puppy. The kids put a set of bumble bee antennae on him. He didn't seem to notice. 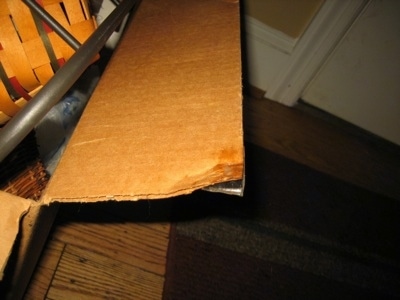 Before I knew it, Bruno was chewing on one of the boxes. "Hey! NO!" Bruno walked away from the box. "Hmmm, so I am not allowed to chew that box..." 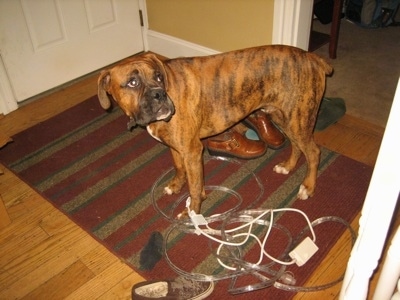 "Well then, I think I will just lie down right here and chew this new toy." "Hey! NO!" Bruno stopped chewing on the string of lights, stood up and walked away. "OK, so I'm not allowed to chew that either..." 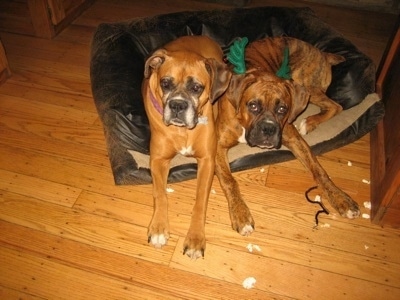 Bruno went and lay down in the dog bed with Allie. The kids put the bumble bee antennae on Allie and a pair of antlers on Bruno. Before we knew it, Bruno had chewed the antennae off of Allie! We were not able to correct him, because we didn't see him take them off of Allie, nor did we see him chew them up, but there was no denying it! "Oh Bruno, you bad puppy." 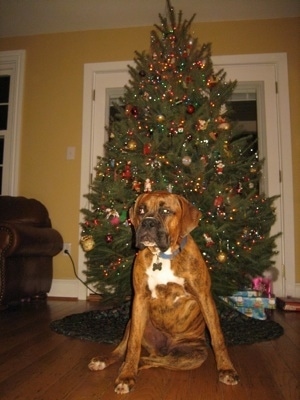 We had to tell Bruno right from the start he was not allowed behind the Christmas tree. Not at all, no exceptions. All family members, including kids, had to agree to correct him the second they saw him start to go back there. I'll have to keep a very close eye on him. There will be a lot of presents under the tree and we really do not want that pup to chew them up. We kept sending him back away from the tree as we were decorating. The bones that were wrapped for Bruno need to be put up on the shelf until Christmas morning. That would be way too tempting for him. 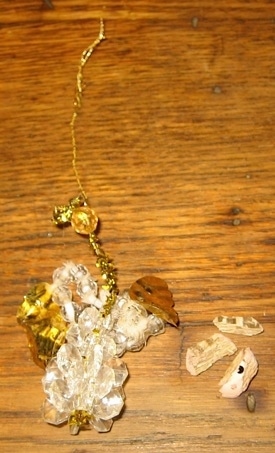 Later that same night, Bruno was in his dog bed crunching away on something. I went over to see what it was. "NO! Give me that!" Bruno chewed up an angel ornament. Not sure if he got it off of the Christmas tree or found it on the floor somewhere. No one in the family was able to tell me if they actually hung that one up on the tree. Bruno, we will be watching you! 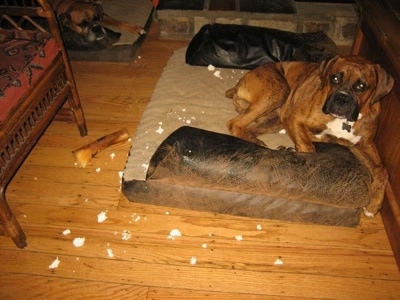 The next morning Bruno apparently helped himself to another ornament. No one saw him, but I highly doubt this ball was on the floor and I believe he did indeed steal it from the tree. Nope, can't blame Allie; Bruno has gold glitter all over himself and his bed. Bruno we are now on puppy patrol. You cannot be left alone in the living room for a second. We need to catch you in the act. 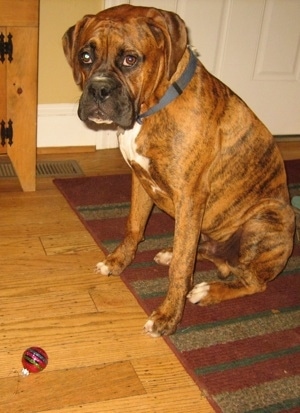 Bruno you little thief! I was in the living room, only feet from Bruno. I heard the rustle of the Christmas tree and turned to see Bruno running toward the door with something red in his mouth. "NO, BAD DOG!" Bruno immediately dropped the ball. Luckily it didn't break. I still didn't catch him so this is not over yet. He does not yet know it's wrong to take something from the tree. He might know it's wrong to carry that particular red ball, but that still does not mean he knows it's wrong to take the ball off of the tree. When I yelled Bruno was carrying the ball in his mouth. He does not reason anything else out as a human would. It's all about the moment. 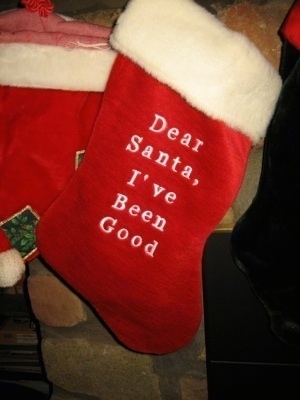 We found the perfect stocking for Bruno. It has two sides to it. One side shown above: "Dear Santa I've Been Good." 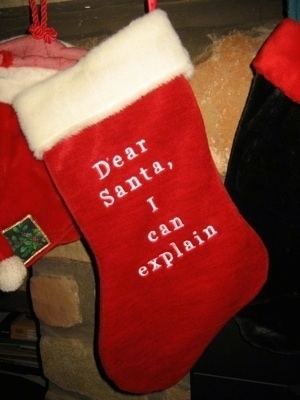 And the other side. I believe we will be keeping it turned to this side :) "Dear Santa, I can explain." 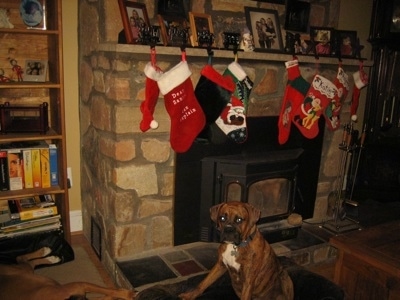 The stockings were hung by the chimney with care...that is until Bruno came along! See that red stocking all the way to the left? Bruno reached up and pulled it down. The metal stocking holder came crashing to the ground just as my husband yelled "NO!" Bruno ran over to my husband, shaking next to his leg. My husband ignored him until he got over it. When a dog is upset or frightened, it is the wrong time to give affection to a dog. The loud crash of the metal holder scared Bruno. If anyone would have tried to soothe Bruno and comfort him, that would have intensified his fear, making an imprint in his mind, which means Bruno could then have easily developed a fear of something, for example of red stockings, metal hangers or loud noises. Dogs do not read human sympathy the same way humans read it. Humans call it "emotions"; in the animal world it's called "energy." Whatever you want to call it, dogs can read it. There is no hiding how you feel from your dog. Dogs can feel a human's emotions and they read sympathy as weak. At that moment Bruno needed someone with energy that was stronger than his own to help him move on and remain stable. Dogs do not speak in words, they communicate with one another by feeling one another's energy/emotions. Pack leaders are always strong and stable, calm and assertive. If they are not, another dog takes over. It's instinct, and your dog is no exception. 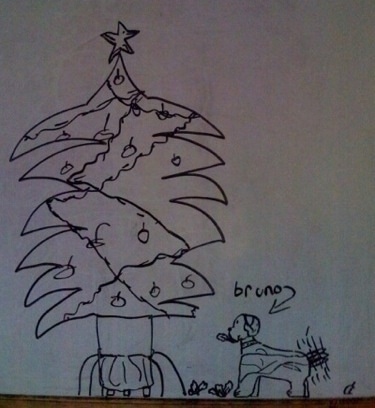 Bruno! You are earning quite the reputation. This is a drawing I discovered on the white board, courtesy of my 10-year-old. 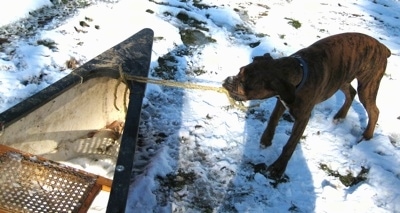 Now Bruno, daddy's canoe is NOT your toy! "NO, leave it!" 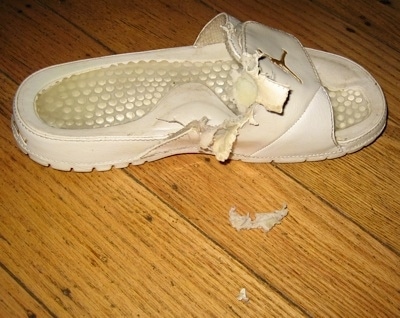 Oh Bruno! Katie is not happy with you. We were eating dinner. When we were finished I walked in the living room to check on Bruno. Apparently he was also eating...Katie's shoe!

We needed to go out from about 4:30 p.m. until midnight and we were unable to bring dogs. That's seven and a half hours Bruno would need to spend in his crate. The vast majority of dogs spend this amount of time in their crates while their humans are at work. It's not a horrible amount, however it's longer than I would like him to be in there. It's too cold outside to leave him in the outdoor pen. Therefore, Bruno needed additional exercise, other than just one walk. 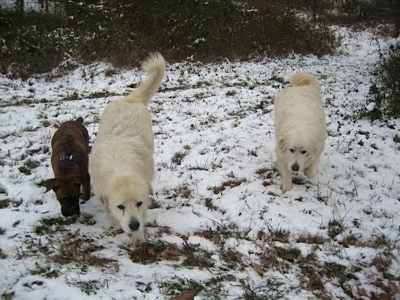 Starting first thing in the morning I put him over with the Great Pyrenees so he could do the morning rounds with them. For two hours they all did their rounds of the goat and horse fields, and a few sessions of play. 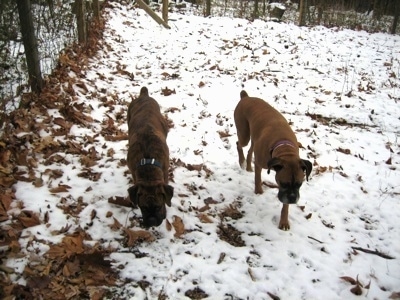 Bruno came in for a short bit then it was back out for another half-hour walk through the woods. I let him rest for another hour and then he and Allie went out again for another hour-and-a-half walk. It was cold and supposed to snow, so I decided to put their jackets on. 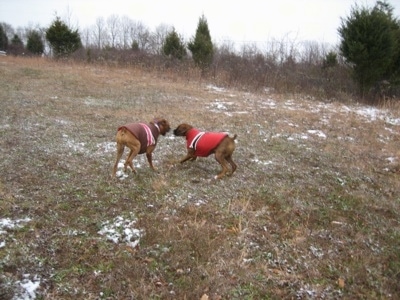 Then back out for another 30-minute walk/play. 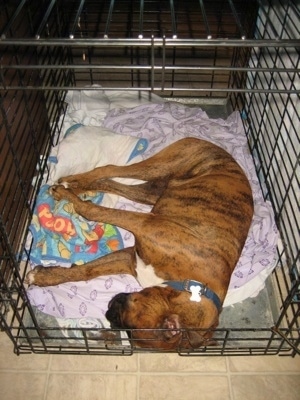 By the time we left Bruno was exhausted, happy to go into his crate and ready to sleep all night. 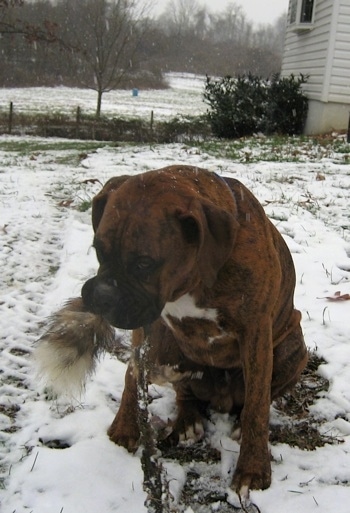 Bruno was out and about on the farm and came back to the house carrying this. It's the bones of a fox tail/spine. Bruno found it in an area that the Great Pyrenees protect, right outside the chicken coop. Seems the Great Pys do a very good job out there! All chickens have been accounted for. "OK, Bruno, thanks, but no thanks. Drop it..." Bruno and the cats are friends.