Raising a Puppy: 23rd week in his new home

A day in the life with Bruno the Boxer puppy.Bruno's 23rd week—29 weeks old, 68 pounds, 23 1/4 inches from the ground to the highest point of the shoulders (the withers). 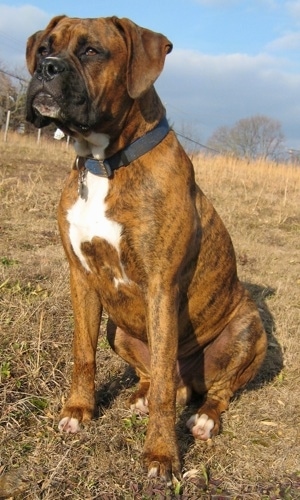 Last week I brought Bruno down with me while the Great Pyrenees were eating. My female Py who normally LOVES Bruno (they play every day) charged at him aggressively. I stopped the fight, but with the food dishes still down, the tension was high between all three dogs. Fight mode was still in the air. Rather than solve the problem by removing Bruno or removing the food, I decided to deal with the problem head on. It was time to call in reinforcements, with the help of my daughter. The two of us, my daughter and I, took over the food bowls simply by taking over our space around the food and making all three dogs back off. When a dog would come over to try and eat we'd simply step in the way, not talking, just silently taking it over like one dog would do to another. The food was ours. Tacoma, the female Py, was a bit relentless in the beginning. She was using her 115-pound body to try and push us away from the food. My daughter and I both knew to be calm and think big. I told her to pretend she was a big, strong grizzly bear when she was blocking the dogs, or when blocking Tacoma from going after Bruno. We did that until the dogs backed off and allowed us to "eat" first (we pretended to eat their food). Then we let Bruno and Tundra eat, but we made the aggressive one, Tacoma, wait until last. 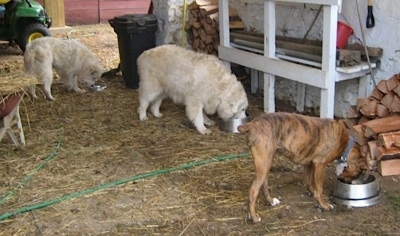 For several days we went outside without Bruno and made Tacoma back off her food dish until we said she could eat it. After working on Tacoma for about a week, I, by myself, took Bruno with me during the Great Pyrenees's feeding time. I put down three bowls of food. I got all three dogs to eat in their own separate dishes. When Tacoma even looked like she was going to take over another dog’s dish, I stepped forward and pointed at her and said one word: "Hey." That was it; she'd go back to her own dish. I am amazed at how Tacoma was last week to how she is today. Last week she was boss and she wanted to kill Bruno at feeding time. This week I am the boss and all dogs are happier, because now they can all freely eat with no fights.

Another change I noticed, when taking the dogs for an off-leash walk through the fields and woods, Tacoma, at her own free will, walked behind me. In the past she had always run in front of me. Sure, if I would turn in a different direction, she would turn and run the way I chose, but she always got back in front. I knew I had an issue with Tacoma and I knew I needed to do something about it. 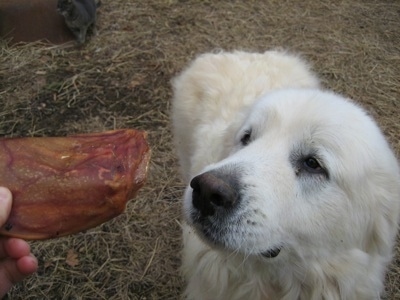 Every morning the Great Pyrenees would get a pig ear for moving from the smaller yard around the chicken coop, into the larger woods and fields during the day, so they could keep the foxes at bay. I'd open the gate, the two Pyrenees dogs would go through the gate and turn around to get their pig ear. Tacoma would always rush it, lunging her body towards the gate to snap up her pig ear and run with it. I had started making her wait, giving the pig ear to the calmer male Pyrenees dog first. Tacoma had to sit until she looked calm before I would hand her the ear. This took some time, but she soon learned to calmly wait for her pig ear.

Also, she used to cut in front of me every morning as I walked my rounds to feed the animals, leaning her 115-pound body against me, which would stop me from walking and I'd pet her. Little did I know at the time, this was her dominating me. I had always assumed she just wanted "attention, to be petted," but it was more than that. It was her telling me she was boss. I put a stop to that by continuing to move forward, not petting her. I walked as if she was not there. I felt like a snow plow pushing a load of snow.

Here I had two packs with one dominant dog in each, the two Great Pyrenees outside with the female Tacoma as pack leader, and the inside Boxers, Allie and Bruno, with Allie, the female Boxer as pack leader. No wonder Allie and Tacoma were getting into vicious fights. Things are really starting to change around here, for the better. I still have not attempted to get all four dogs together as a pack. I feel I need to establish myself as pack leader 100% with all four dogs before I can attempt that. I need to make sure I am in complete control, in my mind especially. We no longer have fence fights. I can stop that with one word and a point of my finger. The day is coming close.

Living in the Moment

I was outside doing the normal animal rounds (feeding, etc.). Just five minutes before, I had given the Great Pyrenees their morning pig ear and put them in the back. I heard something that sounded like dogs fighting. By the time I got over to the back field I could see Tacoma the Great Pyrenees running further into the woods with her pig ear and Bruno moving away from her. I didn't know Bruno had gone back there or I would have been watching since there was food involved. 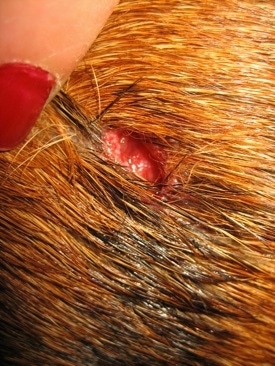 I called Bruno over to me. He appeared to be shook up. He had drool all over his face and I later noticed a bite mark in his back, which will have to be soaked daily in a solution of warm Epsom salts and water to prevent it from getting infected. I wiped the drool off of him with my sleeve and put him out of that area into the main yard. I finished feeding the animals and started looking for Bruno. He had squeezed back into the horse field and was PLAYING with Tacoma. One second they are fighting because there is a pig ear at stake, which I know Bruno was trying to take from Tacoma, and the next they are playing like nothing had happened. 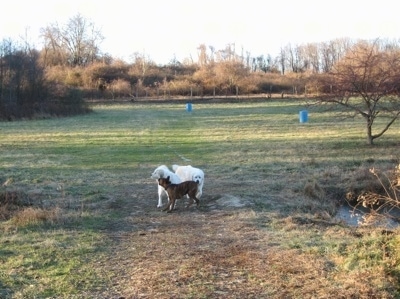 I walked over to see the three of them. They were perfectly fine, as if nothing had happened. Allie the Boxer came over and she and Tacoma smelled one another through the horse gate. I sensed no tension between them. 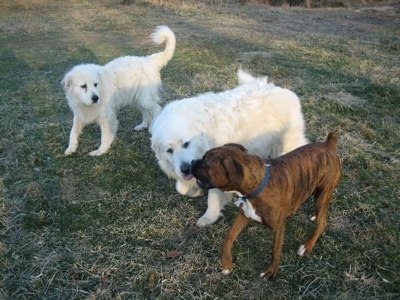 The trail was one the Great Py's needed to pass in order to get to the larger field. The Great Pys approached Bruno on their way to the field and if I didn't know any better, I would have thought that maybe these dogs never met before. They smelled Bruno all over and he stood there like a statue and let them. Then they were off on their morning rounds. It seems as if Bruno may have learned some "pack respect."

The whole family has been keeping an eye on Bruno. I am happy to say he has not touched or attempted to touch the Christmas tree in days.

Bruno and the Raccoon

Every morning Bruno has gotten into the habit of squeezing through the horse gate and finding the Great Pyrenees so he can spend a few hours with them. From that field, if the gates are open, Bruno has access to not only the horse field, but the woods and the yard closest to the chicken coop, where the Great Pyrenees spend their nights. 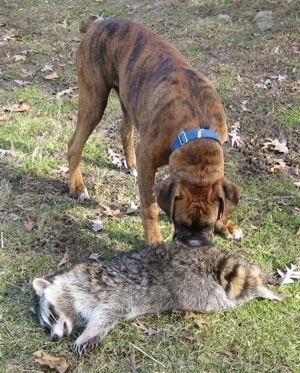 Look what Bruno found in the yard that surrounds the chicken coop. It's a raccoon. Bruno was carrying it around in his mouth. I don't think Bruno killed it; the Great Pyrenees were barking up a storm last night and this morning seem pretty disinterested in it. It was dead and too cold to be a fresh kill, but soft enough to have been last night’s kill. Before we adopted the Great Pyrenees, we lost at least one chicken a night to raccoons, foxes and opossums. This raccoon was apparently trying to get an easy meal from the chicken coop. No raccoon in his right mind would enter into Py territory unless he was looking for food. 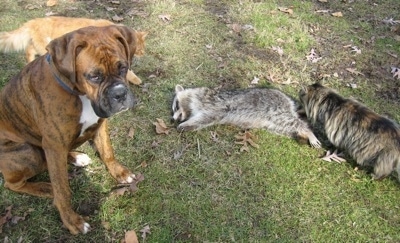 Bruno and the cats check out the raccoon. "OK, Bruno, leave it. It's not for you to play with." 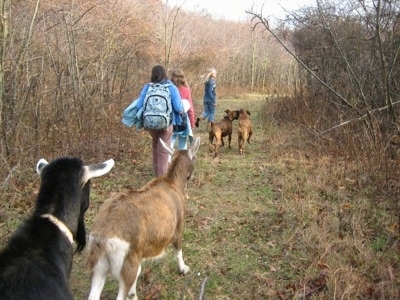 Bruno and Allie enjoy going for walks in the goat field. The goats put the dogs in their place really fast. While the dogs are curious about the goats, they know to stay away from them. 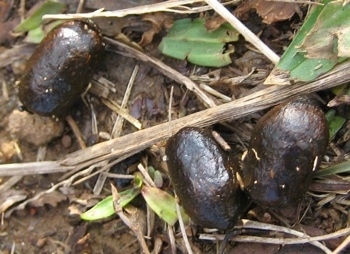 Bruno knows to stay away from the goats themselves, but he tends to enjoy eating their droppings."BRUNO, YUCK! They are not raisins. Leave it!"

While out for one of our off-lead walks, Bruno stopped to poop. That's when I noticed this very long spaghetti-like worm coming from his rear end all the way to the ground and then some. Tapeworms again... Off to the vet to get worm medicine; I will be worming all four of our dogs. Between all of the dead animals and different types of poop Bruno licks up, it does not surprise me he picked up worms again.

Bruno has become quite the guard dog. He has actually never met a person he did not like and is very friendly from the get-go when out in public, out on a walk or when people pull up to the house in a car. However, when he sees a person from a distance out in the fields that he does not recognize, he goes into this guard dog mode. For example when some pipeline workers were walking out in one of the fields, or when a hunter was walking through another field all suited up in camouflage. The pipeline workers never got close enough for Bruno to smell, however the hunter came into the front yard. Bruno barked at him until he got close enough for Bruno to smell and I started talking to the guy. I had also told Bruno "Enough, No." Bruno then turned back into his happy self and greeted the man. See Video Clip of Bruno Barking his Howling, Guard-Dog Bark. Notice how he jumps forward. He does this when there is something out there that is too far away to smell or really see clearly, yet, he does not believe it belongs.