Raising a Puppy: 25th week in his new home

A day in the life with Bruno the Boxer puppy. Bruno's 25th week—31 weeks old, 71 pounds, 23 1/2 inches from the ground to the highest point of the shoulders (the withers). 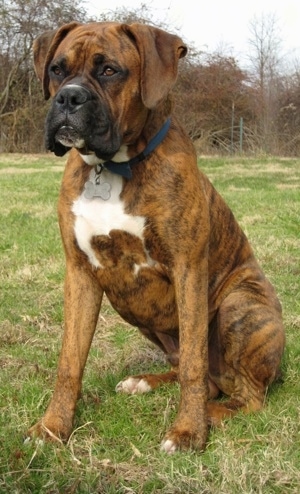 Well, Bruno got through his first Christmas with only a few chewed ornaments and a few attempted tug-of-wars with the tree skirt. He never chewed up any wrapped presents. 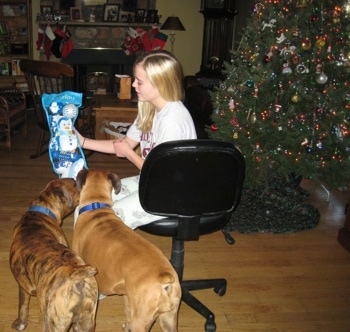 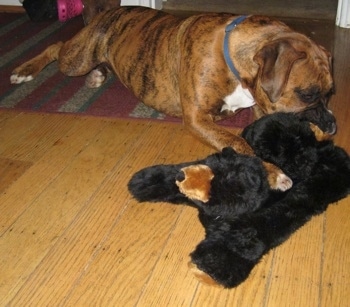 He really enjoyed all of the new toys he received for Christmas. 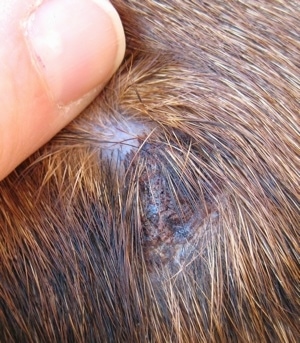 After 10 days, Bruno's bite wound is healing up very nicely. 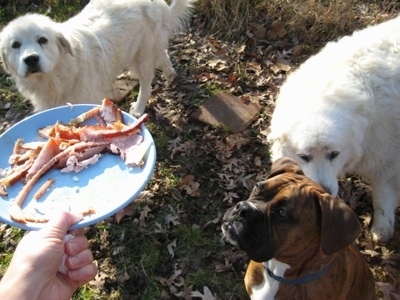 I continue to work with Bruno and the Great Pyrenees around food. Seems the dynamic has changed a bit. Tacoma, the female who was very dominating, even pushing me out of the way with a look of determination on her face to get to the food first, has really backed off. She seems to stand more at a distance. Whereas Tundra, the normally mellow male, seems to be the one going after Bruno when there is food involved. I had been concentrating on Tacoma, the more dominating female and was not paying much mind to Tundra. I now realize I need to focus on all three dogs, as it could very well be Bruno who is setting the Pyrenees off. I will be paying close attention to this to see who the instigator is.

Two incidences: I was feeding the dogs some tasty meat. Tacoma was keeping her distance. Bruno and Tundra were right in front. A piece fell on the ground and Tundra went after Bruno. I was able to break it up by pulling Tundra off of Bruno.

None of the dogs were leashed and I was able to keep anything else from starting. I worked on telling Tundra I was boss by making him lie down.

Later the same day I went down with more tasty food. While I was feeding the dogs some treats, one of the goats bucked Bruno and he fell backwards onto the ground. To my surprise Tundra went after Bruno again. He was only a foot or two from making contact when I yelled, "HEY!" This time just yelling "HEY!" made Tundra stop in his tracks. 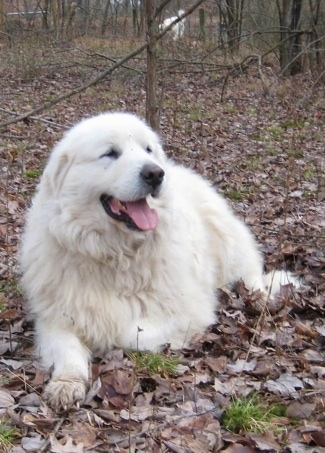 Bruno was moving away from Tundra. Tundra started walking in Bruno's direction once again. I moved in front of Tundra and "bit" him in the neck with my fingers. I then made him lie down. Notice Tacoma in the background. She had left the area. Bruno was sitting down a few feet behind me.

This second instance was an improvement from earlier that day when yelling "Hey!" had no effect.

Tundra seems to be very submissive toward me. He backs off much easier than Tacoma did.

During both of these instances the female, Tacoma had moved away from the area. She wanted nothing to do with any of it. Perhaps it was Tundra who got into the fight with Bruno ten days before, and all this time I had been working on Tacoma and not with Tundra, assuming he was the mellow guy. I do know Tacoma was very dominant just two weeks before and she has really backed down. Now to work on Tundra, Bruno and Tacoma as a group.

FYI, when there is no food involved, they are best of friends. Simply trying to keep food away from them is out of the question. Living on a farm, there is bound to be a time where one of them finds something they consider food. This issue needs to be addressed head on. Progress is slow, but I do see progress.

No Food No Problems

When there is no food involved, there are never any problems. Bruno plays with Tundra and Tacoma every day. 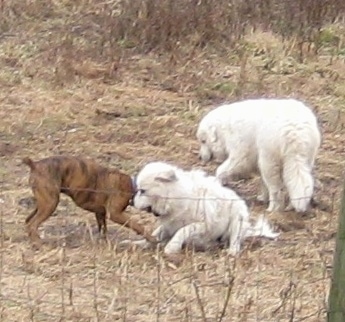 Bruno playing with both Tundra and Tacoma

Bruno playing with the female Great Pyrenees, Tacoma, while Tundra stops playing for a second to look at me. 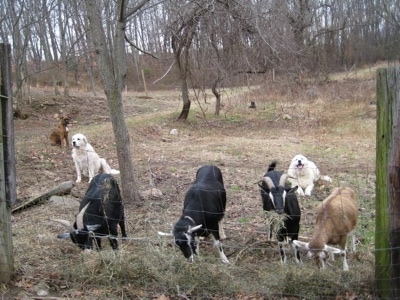 The dogs with the goats—Bruno, Tacoma and Tundra take a break from playing and sit down to watch over the goats, Darrell, Peter, Greg and Marsha. 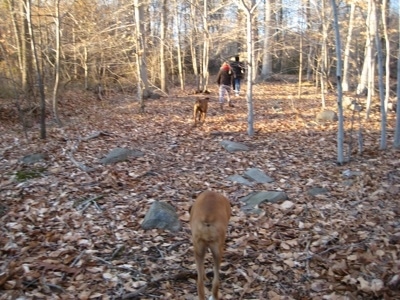 Bruno and Allie out on one of their hikes Stopping for a drink at the stream. Simba the cat is along for this hike. 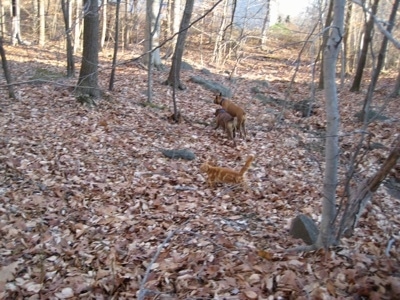 Bruno, Allie and Simba the cat

Bruno was pretty freaked out by the various firecrackers going off in the area on New Year’s Eve. He wanted inside, and he went right to his crate and stayed there. When he did come out of his crate, he was afraid to go outside. I made sure the kids did not go after him and comfort him. To Bruno, that would have made him even more fearful. To have a human show sympathy, intensifies the dog’s reactions, as a dog reads human sympathy as weakness. Bruno was already in a weak state and did not need what he would interpret as a weak human, which would make him think he had all that much more to fear. He needed to feel strong energy around him. Bruno had resorted to his crate, a place he felt safe and went to sleep. I do not want his fears to escalate to where he shakes and shivers at the sound of a firecracker. So, instead of trying to make him feel better the human way, we did it the doggie way. At 2 a.m., when all had calmed down we took Bruno out for a nighttime hike. What fun! He forgot all about how there were loud booms outside the door. Bringing in the New Year doggie style! Bruno knows not to pee in the house. He has not done so since he was about 19 weeks old. No one ever told him however, that he should not pee in the barn. He knew not to pee on the floor of the barn, but he had assumed he could pee on top of the hay. After all, it smelled like outside. I was standing right next to him and when I realized he was peeing..."Hey!" Bruno looked at me confused, still peeing, "HEY NO!" and I bit him in the neck with my fingers. He still looked at me confused, still peeing. I took his collar and pulled him, "NO!" Bruno stopped mid-pee. I am not convinced he totally understood it was the peeing I was upset about. He was later hesitant to enter the barn. I'll be working on this one. Dog's got to be allowed in the barn!