Raising a Puppy: 26th week in his new home

A day in the life with Bruno the Boxer puppy. Bruno's 26th week—32 weeks old, 73 pounds, 23 3/4 inches from the ground to the highest point of the shoulders (the withers). 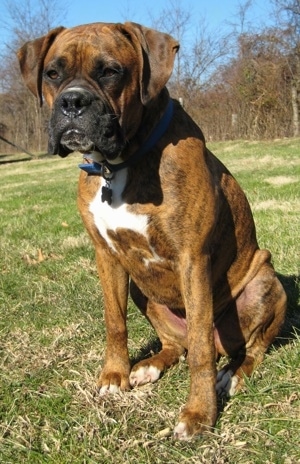 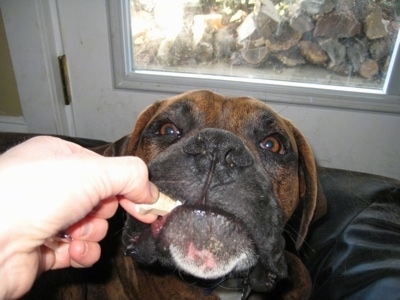 Bruno was due for his second dose of worm medicine. He was sleeping on his bed and I went over and gave him his pills. They were chewable and he loved them.

Five seconds later...Bruno gets up from his bed and throws up! 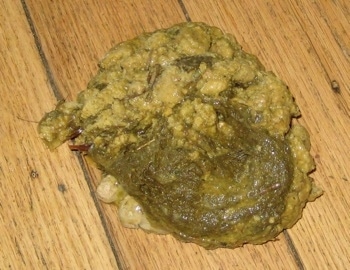 If that is not gross enough, the puke smelled like poop! Bruno, you were out in the fields eating poop again! It smelled like a combination of horse and dog poop. It was definitely not the worm medicine that made this pup toss his cookies, it was all the crap he was eating...again! Bruno, this is the kind of thing that gave you worms in the first place! I am off to the vet again, to pick up another dose of worm medicine for him.

I needed to wait until the hay delivery came before leaving for the vet. Bruno was outside with the hay guys as they stacked the bales. When they were done they knocked on the door and I paid them. I got ready to leave for the vet. But where was Bruno? I called and called him. I walked around the yard and started checking each field. Calling and whistling. No signs...I was coming out of the horse field when I heard some chickens squalling. Oh shoot! He's in the chicken coop! I had checked the chicken yard, but not inside the coop itself. Bruno was oblivious to my calls. I saw him pounce at a chicken, using his paws the way Boxers do. I ran...

As I got closer I had Bruno's attention. "HEY, NO!!!" Bruno stopped pouncing. Unlike, Allie our older Boxer, Bruno didn't have an intense "get them" look on his face when going after the chickens, it was more "play mode," but play leads to injured chickens and eventually a dog who wants to taste them. I checked inside the coop, all was fine. Wendy the turkey was also fine. He was inside the coop for at least ten minutes with no injured chickens and no sounds of upset chickens. I had checked the chicken yard a few times but had not heard anything, which means he was most likely licking up poop again.

However, as I got out into the chicken yard I noticed he did start to pull some feathers out of one of the hens. This hen was in the area where I had seen Bruno pouncing. I had not seen him, but it would not have surprised me if he picked up this chicken and tossed it across the yard like he does with his stuffed toys. 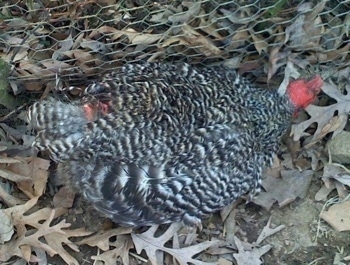 The chicken was alive, but all shook up. You bad puppy... 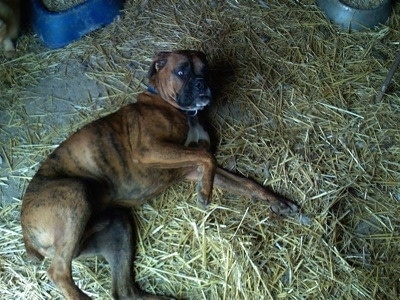 I brought Bruno into the chicken coop. A few chickens flapped their wings and the look of excitement returned to his face. "AAttt!" I bit Bruno in the neck with my fingers, matching his intensity. The chicken coop is not a place to be excited and we do NOT play with chickens. I made Bruno lie down with chickens all around him. All of this had to be done with me remaining calm, yet assertive for Bruno to really understand the message I was relaying to him. These are MY chickens and he is not to touch them! 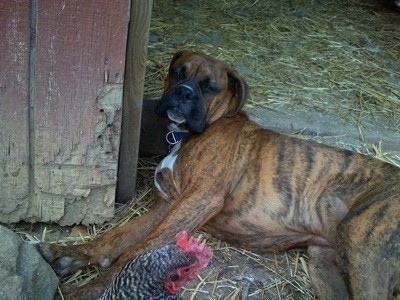 Just outside the coop Bruno got a tad excited again. I made him lie down once again and put a chicken on him. The chicken flapped its wings and Bruno got excited again. I "bit" Bruno in the neck...he lay back down. I told him to stay and retrieved another chicken. Bruno laid there while I held the chicken near him. Chickens are NOT toys...

I will have to bring Bruno with me more when I go down to the chicken coop. He must be taught chickens are NOT his toys. This needs to be addressed, or Bruno will start to go after the chickens in a hunting kind of way. In the early days, Boxers were prized for hunting, bull baiting, and for pulling carts. Hunting is in his nature, and nothing better than a tasty chicken! 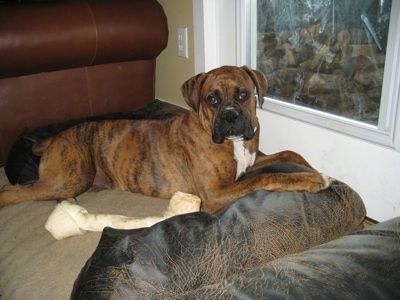 Bruno was relaxing on his bed. It was very cold outside. Bruno started casually licking, then chewing the frame around the window! I heard the gnawing sound and took a peak over at him, "OH, NO!" Bruno stopped and gave me this face. He didn't try and chew it again. 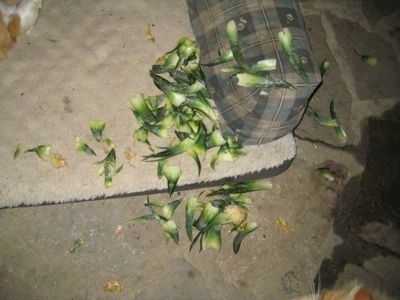 It took me a long time to figure out what this was that Bruno carried to the bed on the porch and chewed up. It's winter here and there are not many green plants out there. I finally realized it was the dead cactus that one of my kids had dumped in the bushes. Oh Bruno, I hope you didn't eat any of that!

The kids continue to work with Bruno and his "Dead Dog" trick, an excellent trick for kids to teach their dogs, as the dogs learns submitting to a child comes with a tasty reward or belly rub. Bruno is catching on nicely.

I looked outside and saw the FedEx truck coming down the driveway. Great, my package is here, only what's Bruno doing? Standing in the middle of the driveway. I call Bruno to me as the truck makes its way closer to the house. Bruno just stands there staring up the driveway, oblivious to my calls and very much in the way of the truck. I yell his name, clap my hands, stomp my feet..."Hey You! COME!!! BRUNO!!" Nothing...he does not even turn around to acknowledge me. The FedEx guy flashes his lights. Bruno just stands there staring at the truck. He loves the UPS and FedEx people and is waiting for them to get out and say "hi" to him. However, being the knucklehead that he is, he does not know he's in the way. 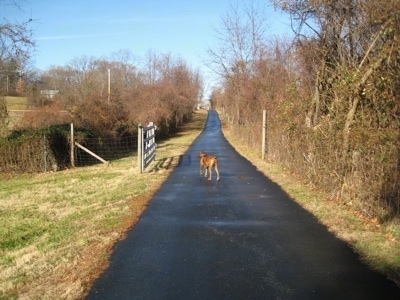 I have to go up and get him. As I approach him he still does not acknowledge me. He's focused on the truck. "Bruno Come!" He turns to me, but turns back to the more interesting truck. I contemplated grabbing a hold of his collar and leading him back. But something told me I needed to make HIM do it on his own or he'll never learn to listen to my calls. As I got closer to him I said, "Come!" When he ignored me I "bit" him in the neck using my fingers as my teeth. Now I had his attention. "Come!" Bruno turned and started to come. I didn't hold his collar at all and every time he turned back to look at the truck I "bit" him again. "Come!" Bruno followed me back to the porch. I made him sit down and wait until the FedEx guy got out (the guy knows and likes Bruno) and then I gave Bruno permission to go and say "Hi." After the guy left I used the same approach to make him come back to the porch and I made him sit down as the truck left.

This is one huge difference between my 7-year-old Boxer and Bruno at 7 1/2 months old. Allie, the older Boxer comes when called. She'll even stop dead in her tracks if she is chasing a skunk if I tell her to. Hoping with more time, Bruno will start to respond like Allie does.