Raising a Puppy: 28th week in his new home

A day in the life with Bruno the Boxer puppy. Bruno's 28th week—34 weeks old, 76 pounds, 24 inches from the ground to the highest point of the shoulders (the withers). 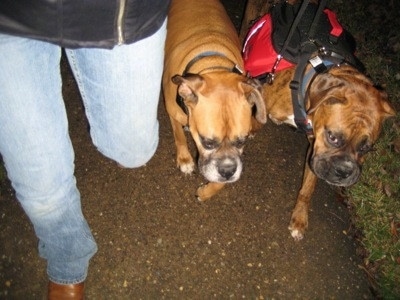 Bruno has gotten a lot better at not trying to play with Allie when he walks. Both dogs are walking very well on the leash. They do not pull and I am able to walk by barking dogs without a scene. Bruno sometimes requires a tug on the lead to redirect his attention away from a barking dog or person walking down the street. He thinks all humans were put on this earth for him to lick. 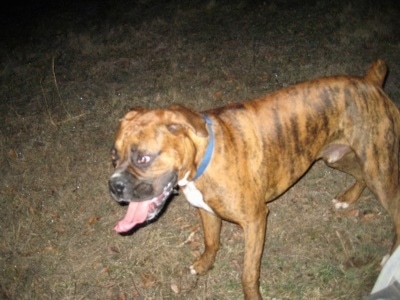 Another midnight golf cart run. It's freezing cold outside, we humans drive the golf cart and the dogs run after us. What fun! 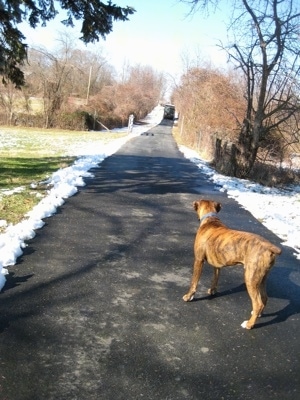 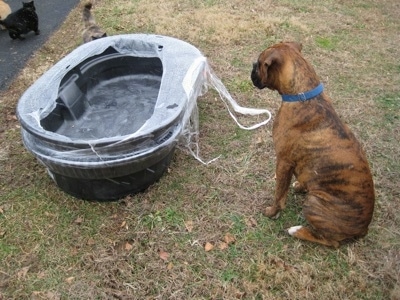 We had a new water tub delivered, one that the goats could more easily reach. I looked out the window and saw Bruno playing tug-of-war with the plastic wrapping. "Hey, NO!" Bruno walked away from the tub. He seems to understand my corrections much quicker than he did when he was younger. 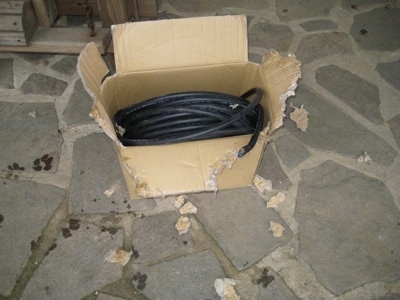 Oh Bruno, why did you chew daddy's box? Not everything on the porch is put there for your pleasure!

Bruno and the Frog Bruno had something in his mouth, "Drop It!" Bruno, it's winter and frogs hibernate, SO where on earth did you find that frog? It's 30 degrees outside. The poor little fella must have been hibernating somewhere. He was alive but lifeless in his hibernation state. I put him in the springhouse. 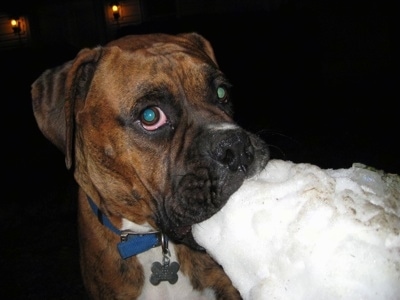 It has not snowed all that much this winter, however there are chunks of snow all around and Bruno LOVES them. He picks up hunks that look way too large for him to be carrying around. 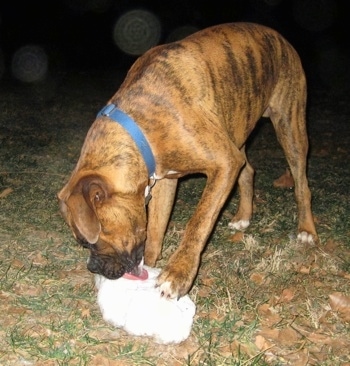 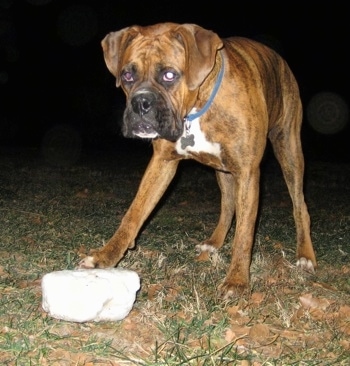 …and paws at it like it's a soccer ball. Silly puppy!

Yikes! We Missed a Walk!

Bruno missed his walk today. It was freezing cold outside, temperatures in the teens with wind. I can do cold temps, but add in the winds...not happening, I'm a popsicle, and so are the dogs. The winds had died down, and it's a good thing, because at 11:00 p.m. Bruno was an absolute spaz. 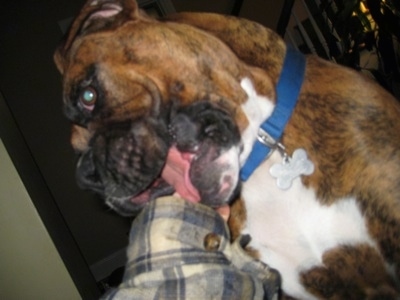 He was trying to play with me, gnawing every so lightly on my hand and arm... Trying to play with Allie... Tossing his bone around like a nutcase. So he was in a playful mood, what's the big deal? Well...it was 11:00 p.m. on a school night and if you know anything about a Boxer, you know they do not play quietly. There is a loud growl that goes with the play, and a BIG pounce followed by a BIG BANG as his 76-pound body lands onto the floor and his tossed bone crashes to the ground. "Bruno, Quiet! Everyone is in bed!"

This pup’s got a lot of bottled-up energy and there is only one thing to do with him...take him out for a run! So at 11:10 p.m. we are off for a run down the pipeline. Bruno is so wound up he decides he must walk Allie himself. Oh the things Allie puts up with! Bruno! I do believe Allie can walk herself.... That is Allie's stretched-out collar Bruno has in his mouth. Bruno got in a good run. At one point I took a picture of him, and that is when I saw it...Bruno had something in his mouth. Chunk of snow?? I don't know, he looks really into what he has. I better go and check it out. "Drop it...Bruno...Drop It!" OK, it cannot be snow; he is WAY too into whatever it is. He is usually really good about dropping things on command. I have to say it with more authority..."DROP IT!!" Bruno drops it. It's dark and I still cannot see it. I decide to take a picture of it so I can preview the picture on the camera to see what it is.... Folks, this is why you do not let your dog lick you.... OH, GROSS, BRUNO! It's a raccoon head! 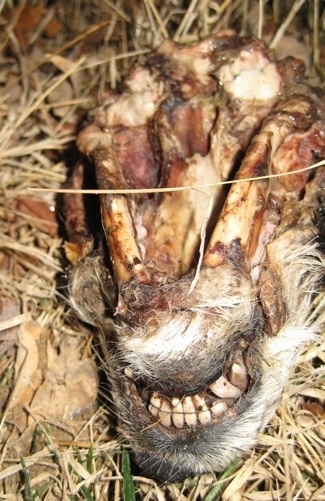 Oh yes, it’s gross all right. "No, leave it!" I kicked it off the trail. "No, Leave it!" Bruno turns to finish the run without the skull.