Raising a Puppy: 34th week in his new home

A day in the life with Bruno the Boxer puppy. Bruno's 34th week—40 weeks old, 81 pounds, 24 1/2 inches from the ground to the highest point of the shoulders (the withers). 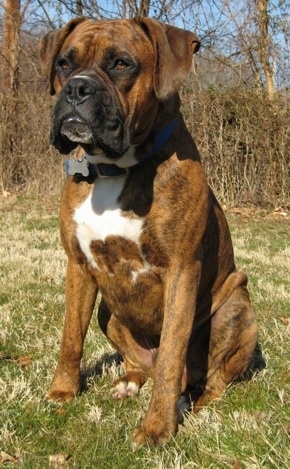 Time out of the Crate 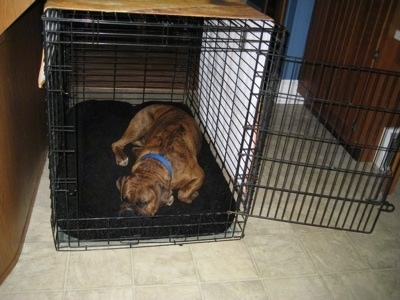 It's been three weeks since Bruno has been put into his crate to sleep at night. Half of those nights his crate was occupied by a cat, however during the other half it was empty. He seems to be doing well without it. Once in a while, I notice he will go into the crate on his own and sleep for the night. The crate door is open, so he's in there on his own free will. I think he rather likes his crate; it's like his own, personal den.

Slipping Through the Gate 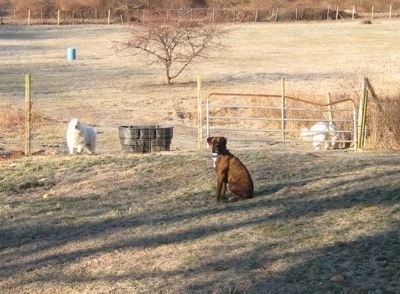 When you first look at this gate you would think there was no way Bruno could get through it; Bruno's got a big fat head and the gate bars are horizontal. 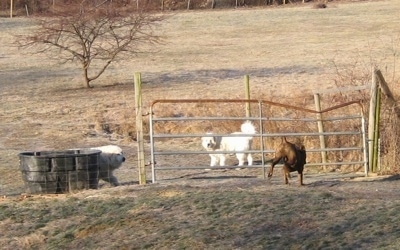 But watch this sneaky pup. See how he squeezes through the gate so he can go play with the Great Pyrenees. In the last few days Bruno has taken up the habit of coming over and leaning on me while I work. Cool, he likes me, only my chair is on wheels and he's pushing me away from the keyboard. Oh, Bruno... 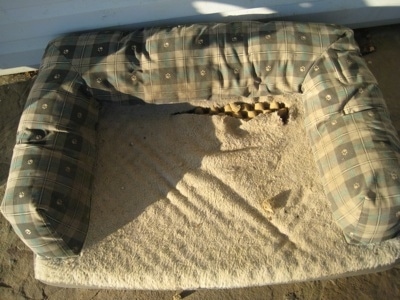 Bruno decided to try and dig a hole in the cat bed. Bruno, that was not a good boy. Look, you ripped it! 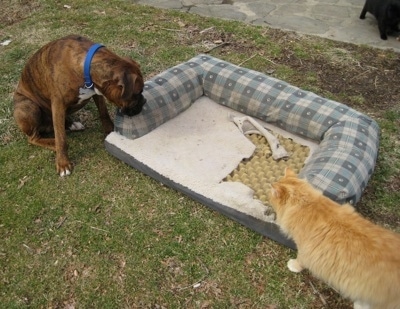 Later the same day Bruno had taken the cat bed from the porch and dragged it to the yard. I didn't catch him, so I was not able to correct this behavior. 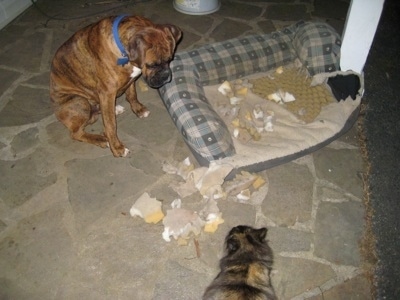 Later the same night...darn it, I should have been watching him. He chewed it even more! 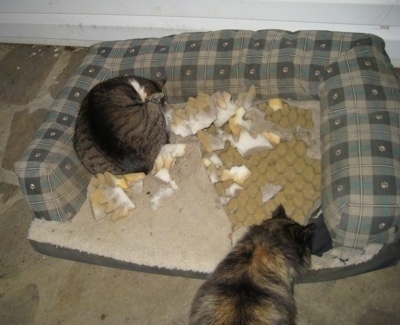 Now Bruno, look where the poor kitties have to sleep, thanks to you! Luckily I have Spike's old dog bed down in the barn. The cats are using it, but there are two of them down there. So I brought up the second bed with plans on tossing this bed in the morning. Bruno, you'll be lucky if those cats still care to rub against you! Look what you did to their bed! 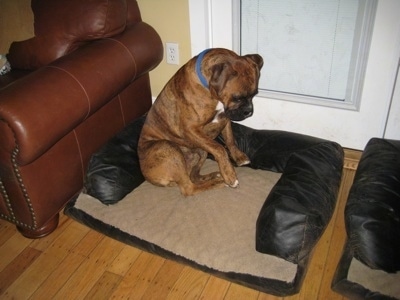 When Bruno came inside he starts to dig on his indoor bed. "NO!" Bruno stops as soon as I correct him, but he still does not know it's bad to dig and chew the outdoor beds. I have not caught him yet. 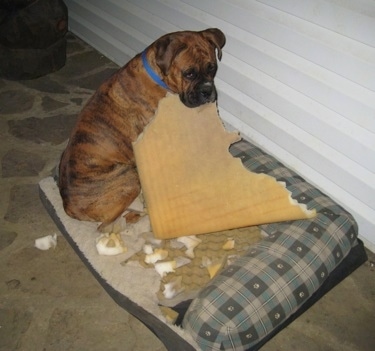 Oh great...what's wrong with this picture? A little more than you think. I opened the front door and found Bruno with that foam hanging out of his mouth. As soon as he saw me he dropped it. I was not able to correct him because he dropped it before I had the chance to recover from my initial shock. OK, but here is the kicker: see that large piece of foam? Well it does not go to the dog bed he is sitting on. It's from the second dog bed (Spike’s old bed) I had just brought up from the barn and put out for the cats! Only I cannot find the rest of the bed! It's 1:30 a.m., cold and windy outside. I walked around the yard some in the dark and didn't see it. I decided rather than get a flashlight and pick up his mess out there in the windy, cold, dark night, I'll wait until morning to see if I can find where he dragged it to.

And I have a new mission—catch Bruno chewing the beds! If I have to hide outside for an hour, I WILL catch that darn pup. If I don't catch him, he'll never stop! It's now 2:15 a.m. and I should be sleeping, but I am up writing about my dear Bruno. Gotta love this pup, huh? The next morning I found the bed laying out in the yard. Bruno walked over to it and smelled it. "LEAVE IT!" Bruno walked away. Oh yeah, he really got to it. The pieces are everywhere! Thanks, Bruno. Now I have to go and get a trash bag and clean this mess up. I have been waiting for Bruno to do it again, trying to catch him. So far, no luck. I don't know if this has anything to do with it, but those old bed cushions smelled really bad! Like a skunk/cat pee. They are not new beds, but old beds our dogs used years ago. They were put in the barn where the cats were sleeping on them and I am sure peeing on them too. That's what barn cats do. But, Bruno! All of that is no excuse to be chewing them to pieces! 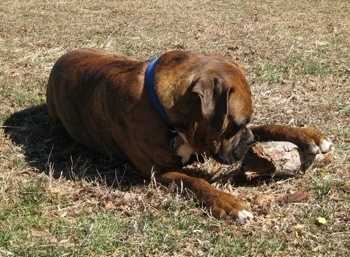 Bruno takes a log from the wood pile and chews it up like it's one of his bones.

Bruno's been getting one walk a day, but he has not been getting that extra exercise he usually gets. It's time to wear this pup out, and wear him out good. Out on a hike. Stopping for a drink Stopping for yet another drink Done drinking and on his way again... 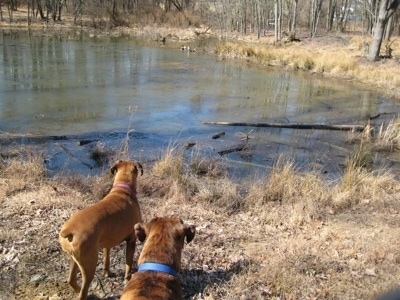 NO, Bruno and Allie, you cannot chase those geese. "Leave it!"

Shortly after this hike Bruno went for a quad run where he chased the quad around the fields for a half-hour. Now he's out in the fields again running around with the goats. 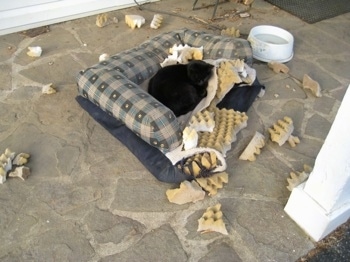 Early in the morning Bruno was let outside to go to the bathroom. I was not up yet, but I was told he decided to chew the remaining bed. My husband and Amie kept checking on Bruno, but he snuck it in on them; he chewed the bed when they were not looking. So they decided to just stand there looking out the window, waiting for him to start doing it again. Sure enough Bruno walked over and stuck his nose into the bed. They opened the window, "Bad Dog! NO!" "Hey, get off of that!" Was that enough of a correction? Apparently not, because later on the same morning (after I cleaned up the first mess) Bruno strikes again. He is playing with the bed when I walk over and yell at him. "NO! Bad dog! This is not your bed." I clean up this mess and put the bed back together (what's left of it) and come in to download the pictures I just took. I look out and Bruno is still lying in the same spot, so I go out and give him a bone to chew on. He chews it for a while. I look out the window and Bruno had dragged the bed off the porch AGAIN! Only this time he didn't play with it; he dragged it away then left it there. I didn't even see him do it. I put the bed back and am waiting for him to try again. I need to catch him right before he starts to drag it off the porch. But of course, he's not even trying right now. I cannot see the bed out the window unless I have my face smashed against the glass; the bed is up against the house. I hit the window and yell "NO!" Bruno practically jumps out of his skin! In one leap he goes from on top of the bed to where he is standing in this picture. He leaves the bed and climbs up on the glider, asking to come inside the house. He goes over to his own dog bed and takes a nap.

Update: I caught Bruno about to drag the bed away two more times. It's been a few days and he has not attempted to touch the bed. (Knock on wood.)