Raising a Puppy: 35th week in his new home

A day in the life with Bruno the Boxer puppy. Bruno's 35th week—41 weeks old, 82 pounds, 24 1/2 inches from the ground to the highest point of the shoulders (the withers). 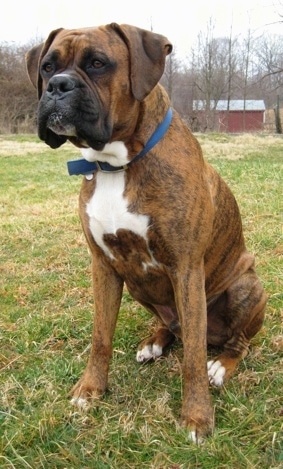 Bruno decides if he cannot CHEW the cat bed he might as well join the cats and lie on it. 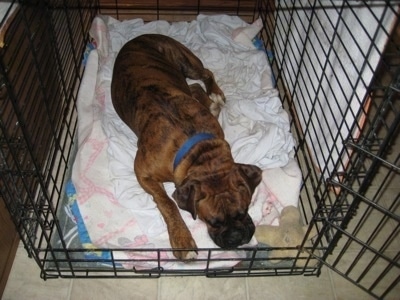 This is Bruno after going for a two-hour golf cart run, where he chased after the kids through the fields while they rode the golf cart. He came inside and retired himself to his crate. I never bother to shut his crate door, but he still likes to go in there. You know what they say: a tired dog is a good dog! 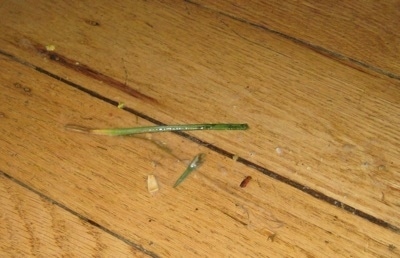 Bruno spits up some grass in the living room. Sara had thrown a paper towel over it before I got a chance to take the picture, so it soaked up most of the moisture. When's this pup going to realize he is not a horse and should not eat grass?

The Kids are the Boss 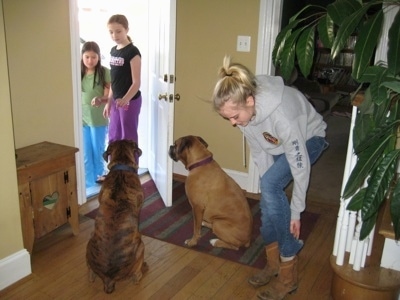 Realizing how important it is for the kids to be boss over the dogs, the kids make the dogs wait until all humans are out the door first, then they invite the dogs to follow. The leader goes first.

I notice the kids do this every single time they enter or exit the doorway. Here the two younger kids are making Bruno and Allie wait until Amie gets her shoes on before they let the dogs dart out the door. "Stay." Allie and Bruno know the routine and happily wait their turn. 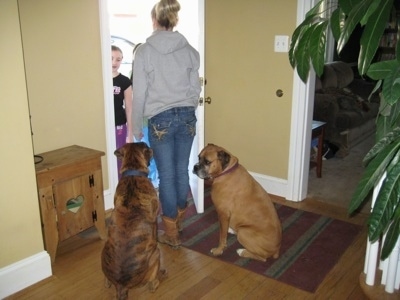 Amie goes out the door. The dogs wait for the command to come. 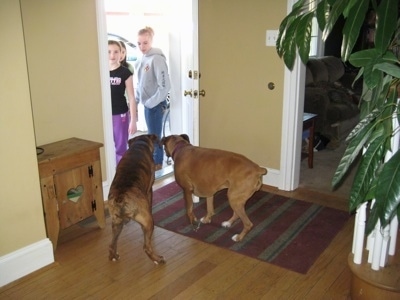 "Come!" Both dogs really love the kids and listen to their commands very well. The dogs respect the kids and accept them as their leaders. Bruno especially loves to play with the kids.

Bruno has not touched the cat bed in about a week! I think those last couple of times I caught him really got the message through to his big fat head. 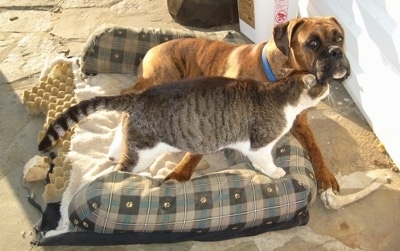 He's been lying on the bed instead. Apparently Trouble the cat has no hard feelings over her chewed bed. Bruno was just trying to chew his deer leg bone that he found in the woods, but Trouble wanted love. Love on her own terms. A couple of times Bruno got a little excited and tried to give the cat "love" back, by licking her or putting a paw on her, and Trouble hissed at him, putting her own paw up in the air. Yes, the love was on her terms. Bruno had to lie there and take it or else! It is actually not "love" when a cat rubs on you. It is the cat marking their scent on you. Poor Bruno, you are owned by yet another cat.

I am noticing a huge difference in Bruno listening to verbal commands. I am happy to report he's been responding very quickly. For example, "Bruno Out" when he is inside a fenced area and I want him to come out, "Bruno Inside" to come inside the house, "Bruno Outside" to get him to go out, "Bruno Come." He's been very good with "Drop it" and "Leave it" for a while now. When there is a car in the driveway and I call him to me, he actually comes most of the time. I do find myself having to step toward him and point sometimes to get his attention, but he responds so much quicker and easier than he did when he was younger. With time, I think he can be as good a listener as his 7-year-old sister! 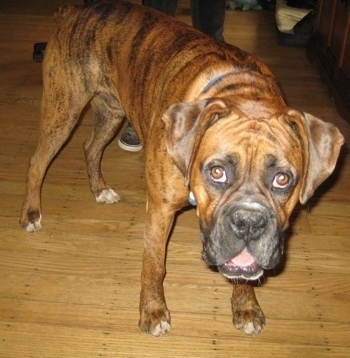 Sara decides to shine a laser light at my head. This is Bruno staring at it. He gets a kick out of the light he can never catch! 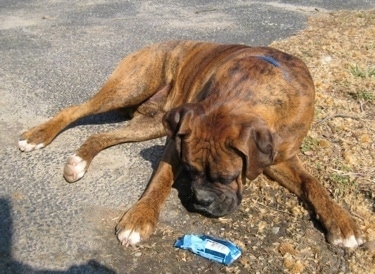 Now Bruno, I realize the kids left that rice crispy treat on the golf cart, but that did not give you permission to steal it! Give me that!