Raising a Puppy: 40th week in his new home

A day in the life with Bruno the Boxer puppy. Bruno's 40th week—46 weeks old, 84 pounds, 24 1/2 inches from the ground to the highest point of the shoulders (the withers). 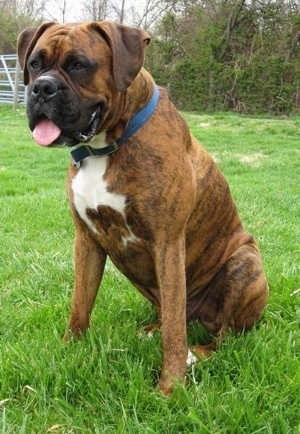 Allie was inside the house. I was outside with Bruno taking his weekly picture. I tell him to sit, I take some pictures, tell him to come and give him a treat. We then move to another part of the yard and do it again until I get a picture good enough to post. While I was taking his picture I heard the guinea fowl squawking up a storm. Something was not right with them. I start to walk towards the goat field, where the noise is coming from. Guineas fly from the center of the brush, landing in the open field. They can only fly for short distances. Yes, something is spooking them, that's for sure. The guineas are running toward me now and right behind them I see it. It's a fox! "Bruno, the fox! Get the fox!" I open the gate and send Bruno in. The fox turns and runs off into the thickets. There are still more guineas in the brush. Bruno turns toward me and looks at me oblivious. "Darn it, I need Allie!" I run back to the house and open the front door, "Allie, the fox!" Allie perks up and comes running outside looking at me to direct her in the fox’s direction. I point to the goat field and she understands. I open the gate and she runs in with her nose to the ground. Bruno, on the other hand, jumps on Allie; its playtime! "Bruno NO, leave it!" It takes me a few more times to get it through Bruno's thick head it's not time to play. After a minute or two Bruno has his nose to the ground and he too is looking for the fox. I didn't expect the dogs to catch the fox; I just wanted them to mark their scent to keep the fox out long enough for me to get the Great Pyrenees, who were in a different field. Allie and Bruno run in the direction the fox was last spotted and come back a few minutes later very tired. 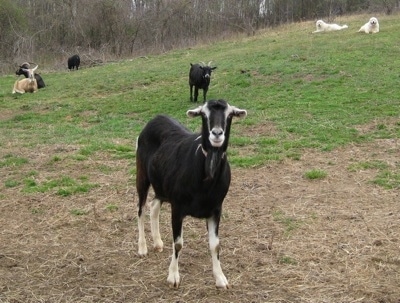 I bring them out of the field and go get the Great Pyrenees, who very eagerly come when I call them. That was close; had I not been outside one of our birds would have been breakfast.

Progress with the Dominant Great Pyrenees

Switching a dominant dog into a submissive one takes time. It's been several months since I first realized I had two Great Pys that believed they were boss of humans. Today, I believe I have two Great Pyrenees that are beginning to understand humans are their pack leaders.

Considering the fox was only yards away from eating one of our guineas in broad daylight the day before, the Pys are on bird control during the day today. The peacocks, chickens, ducks and guinea fowl were not let out. However the fox can still jump the chicken coop fence and the duck pen fences; these areas are not entirely closed up. Therefore, the Pys are left in their nightly area during the day today, the area that surrounding the bird pens. They also have access to the back woods, and the horse field, all of which, in part, surround bird pens from a distance. 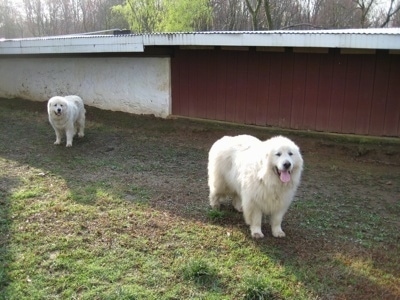 When the birds are let out, the Pys are moved to either the back woods and horses’ pasture or to the goat pasture so they are not tempted to "play" with a chicken. Today, however they were not moved over, so while I was doing the feeding rounds they were outside with me. Tacoma came over to say hello. She placed her 115-pound body in front of mine, preventing me from walking. In the past, I saw this as "She likes me." However, what I have learned from the Dog Whisperer is, it actually means she is being dominant. She's in my space, preventing me from walking is her trying to control what I am doing. To a dog, space means a lot. A dog that does not respect your space does not respect you. Today I silently kneed her out of my way at the same time raising my arms as if to say, "You’re in MY space, have some respect." She immediately walked a few feet away and just watched me. It makes so much sense now. Can you imagine if every time you went to the grocery store humans were coming up to you and getting two inches from your face to say “hello.” We as humans also demand our space from other humans. In the dog world, it's got an even deeper meaning; it's not only respect, but its power.

Something else I noticed: in the past when I would need to put Tacoma the Great Pys monthly Revolution on her or change her tick collar I would have to catch her first, and I would do that by tricking her. She was getting smarter and smarter and it was getting harder and harder. However, since we have been practicing that "Humans are the boss" I have been able to walk up to her, silently raise my arm in the air, and she will duck her head and allow me to approach and do my thing. Now that is progress.

Once in a while when Allie or Bruno are near the Pys, the thoughts of their prior fights rush through my head, and I know I need to remove myself from the area, as a dog can just about read our minds when they read our energy and that is me giving off bad energy. That alone can start a dog fight. I am working on getting rid of those thoughts altogether. Bruno continues to squeeze through the horse gate to visit with the Pys on a daily basis.

We are leaving Bruno home for a few hours with free run of the house. What does that mean?? It means a morning quad ride is in order! 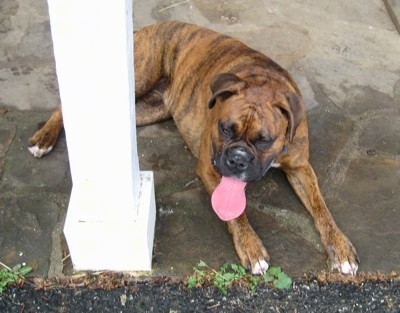 Bruno after his run. 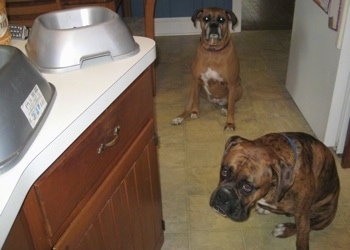 Feeding time is a good time to practice discipline and pack leadership. Here, Bruno and Allie are waiting while I prepare their breakfast. 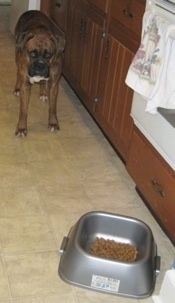 I set Bruno's food dish down and tell him to wait. 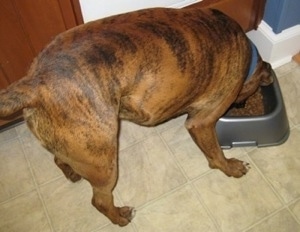 Bruno was one hungry pup.

Allie tends to be more dominant than Bruno, so Allie's food dish is set down after Bruno has his. I tell Allie to wait. 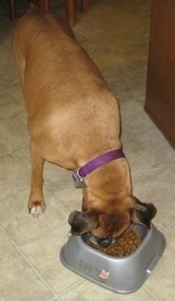 Oh that Tongue, Oh that Slobber 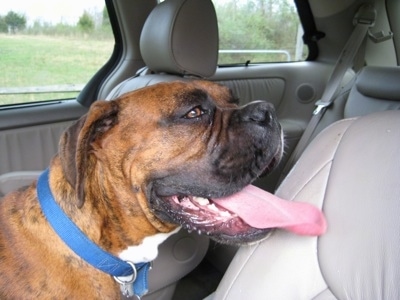 Bruno is on his way to visit a horse rodeo, with a quick stop at PetSmart afterwards to by some goldfish for the spring house. Bruno, it's only 76 degrees outside, what's with all of the panting? You think it's hot today? What are you going to do when summer is here?? 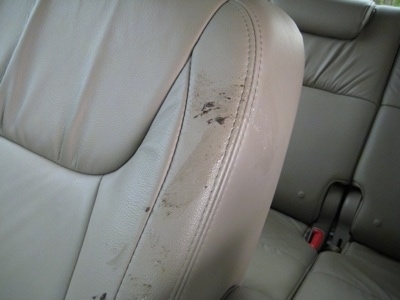 Oh please, someone give me some paper towels so I can clean up my seat and dry off that pup's lips!

Driving into Town for a Walk 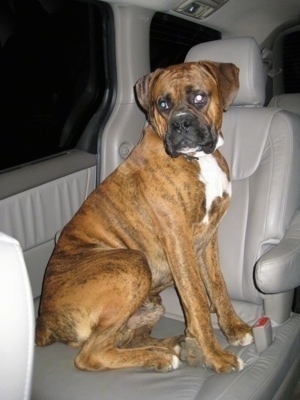 Bruno sitting on the van seat, waiting to leave for the drive into town. As much as he loves the country setting, he also loves walking the streets. 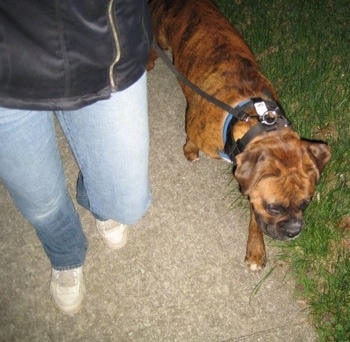 In the beginning we jogged. Bruno really enjoyed that. When I had had enough of jogging we walked. Bruno walked very well, however I did need to remind him to stay at my pace a few times by using my leg to block him from walking ahead. We walked to a pet store where we bought some fish food and pill pockets for Allie. I was able to use the small brown bag to remind Bruno to stay at my pace by holding it in front of him when he would start to pull. It immediately slowed him down and he'd fall back into place. This was Bruno's second walk of the day. One walk a day is all Allie's joints can handle so she stayed home during this walk. Oh Bruno, I am afraid your Illusion Collar just barely fits you. See the top strap; there's no slack left, nothing extra. If your neck gets any bigger I won't be able to get it on you. Time to order a larger size. I love this collar. Makes walking Bruno so much easier.

Hiking with the Horses 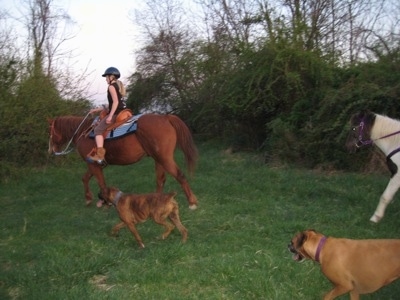 Bruno and Allie enjoy a nice hike with the horses. Amie is on Jack and Sara is on Jazzmine. 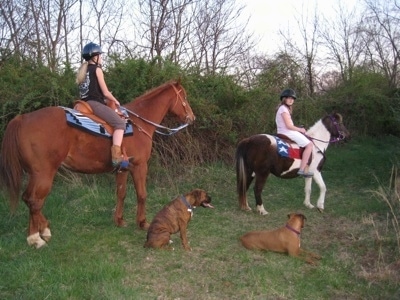