Raising a Puppy: 42nd week in his new home

A day in the life with Bruno the Boxer puppy. Bruno's 42nd week—48 weeks old, 83 pounds, 24 1/2 inches from the ground to the highest point of the shoulders (the withers). 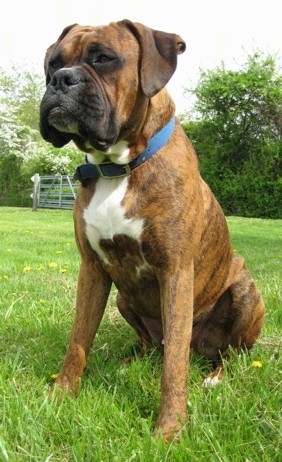 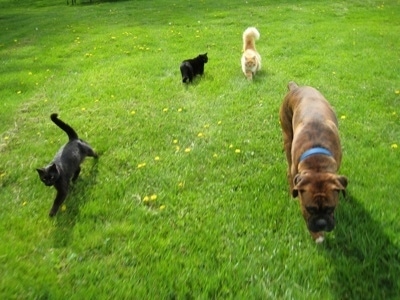 The cats are following, as usual, when I take Bruno's weekly picture.

We are all done. I have cheese left, so the cats get to eat some. Oh what's that I see? Bruno is fixated on the cats. I had not realized this when I was taking the picture until the very next second when Bruno lunged at them. "Hey!" I "bit" Bruno with my hand. He backed off.

Hmm...I think I know what is happening. The cats follow us every week, and every week I tell Bruno to sit, snap some pictures and give him a piece of cheese for sitting pretty. The whole time I am shooing cats away.

Well, I do believe Bruno is seeing this a tad differently. He has no idea I am taking pictures. He just knows I make him sit, that silver and black thing makes some noises, and he gets the command to come and eat a treat. He sees the cats as being told to wait their turn. That means...in Bruno's eyes...his alpha leader (me) is telling the cats Bruno is above them in the pack order. I am feeding Bruno first, I am telling the cats to wait. Oh boy, this never occurred to me.... What to do... 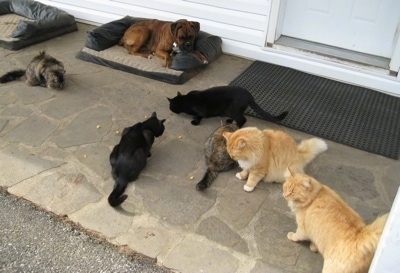 I go get some more cheese and tell Bruno to lie down. I feed the cats cheese while Bruno waits. 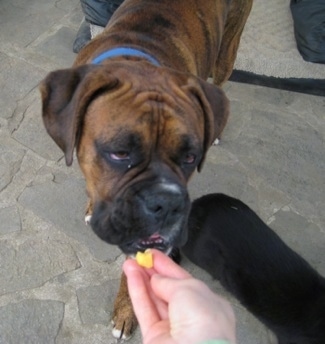 When the cats are finished eating, I call Bruno over for his piece of cheese. Next week when I take Bruno's weekly picture, the cats will be eating first. As much of a pain as it is, that's what I have to do in order to not confuse Bruno. I cannot have him going after the cats because he thinks he is boss over them. 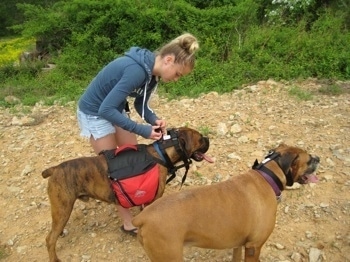 Bruno and Allie go for a nice long walk. The first part of the walk is down the pipeline. During this time the dogs follow us off-lead, and in doing so they burn off some of their energy. Allie sticks closer, because of her bad hips and knees, while Bruno runs his heart out. When we get to the end of the pipeline it's time to collar and leash them up; we are about to leave the woods. Amie puts on Bruno's new, larger Illusion collar and his backpack while Allie waits patiently. 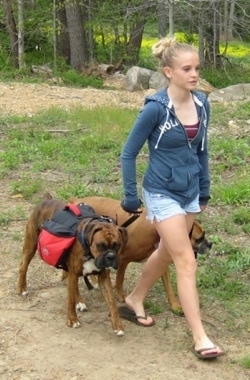 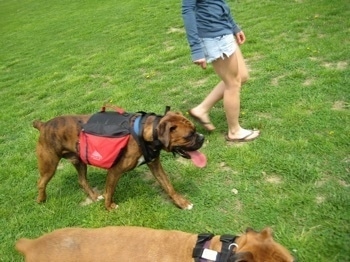 This picture was taken at a neighboring park's baseball field. Bruno is so in tune with following Amie, she doesn't even have to hold the leash. Amie could turn in any direction and Bruno would follow her. 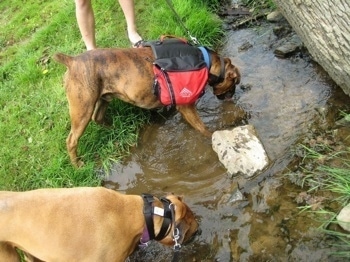 Stopping at a stream for a drink inside the park 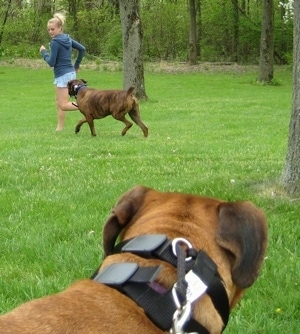 Allie needs to take a rest. Her bad hips and knees are no match for Bruno's energy level. Bruno, on the other hand, doesn't need a rest so Amie decides to run him around while Allie lies down. Amie's not holding the lead, however Bruno follows her as if she is. 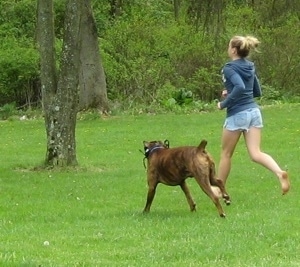 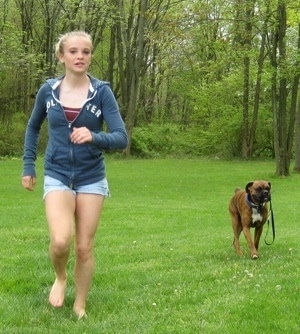 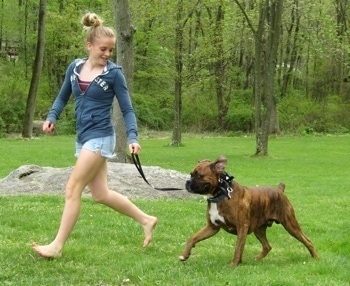 Running with Bruno as he helps Amie hold the lead 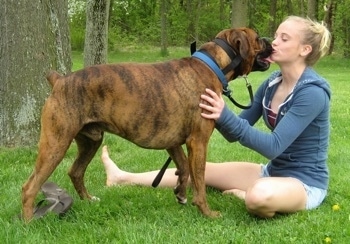 Amie, for goodness sakes, open your eyes. The tongue, the tongue...it's about to get ya! 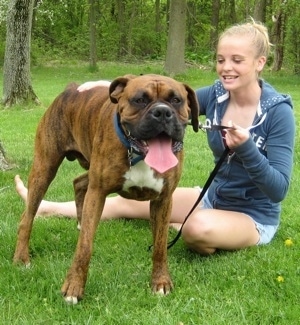 Well Bruno, it's time to get going back on our walk. 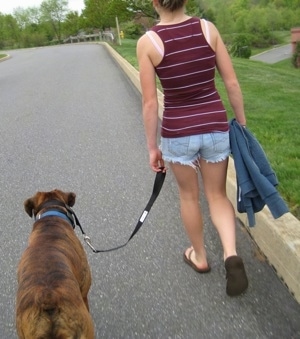 Notice how Amie is barely holding the lead. Bruno has no interest in passing her. He's following his pack leader. Walking without holding the lead... 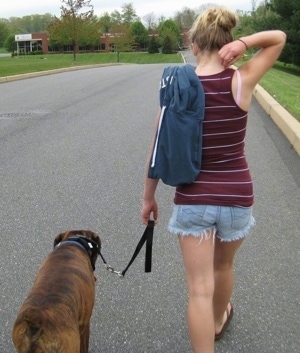 Taking the lead again. Bruno doesn't care if she is holding the lead or not. He just follows. 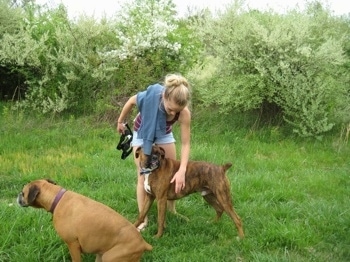 When we get back to the woods we unsnap the leashes and take off the Illusion collars. 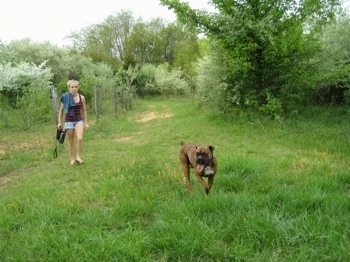 Bruno loves to look around for wildlife. 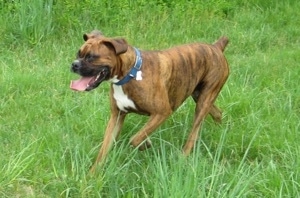 Once again, Bruno runs his heart out while Allie walks. When we get back to the gate that leads to our main yard the dogs wait until the humans have gone first, and actually happily stand there for permission to proceed.

I notice they both do this when coming into the front door to the house as well. Most of the time they do not step up into the house unless we turn around and tell them to come; they stand there waiting. Even the times they do not wait to enter, they never push ahead, never try to go before the humans. They just seem to know humans go first, and they're quite happy about it.

In the past, when Bruno was younger and not as good about waiting until all humans passed, if the dogs entered before a human, even the kids would put the dogs back out the door and do it again. They'd walk through the doorway telling the dogs to wait then they would give them permission to pass. This consistency really seems to have paid off. The dogs respect the kids just as much as they respect adults 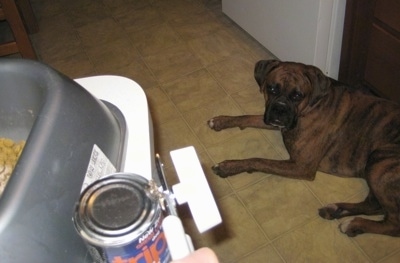 I have noticed when I begin to prepare Bruno's dinner he comes out to the kitchen and lies down waiting so patiently, he'll even lay his head down. When I set the bowl on the floor he looks at me, waiting for me to tell him to get up and eat it. I don't have to say it out loud, I simply have to point to his bowl, he understands and gets up to eat. What a good puppy! 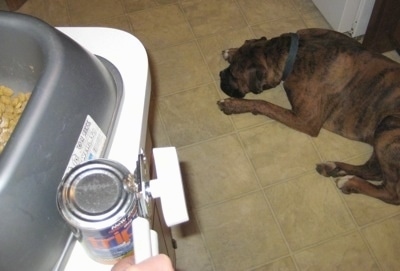