Raising a Puppy: 44th week in his new home

A day in the life with Bruno the Boxer puppy. Bruno's 44th week—50 weeks old, 84 pounds, 24 1/2 inches from the ground to the highest point of the shoulders (the withers). 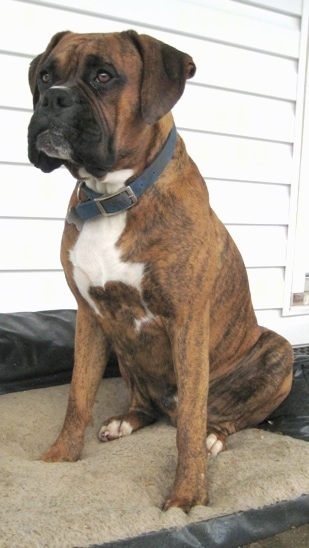 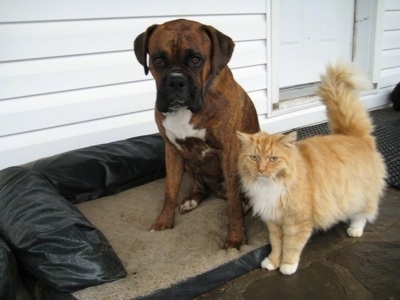 Getting this week’s picture was a little tough. It was pouring rain, so we had to try and get a shot on the porch. I'd toss the cats some cheese and move to the other end of the porch as fast as possible, get Bruno to sit and snap some pictures before the cats came over and started rubbing up against him. This week’s top picture was taken a second before Pumpkin (aka Lumpy) appeared on the scene. 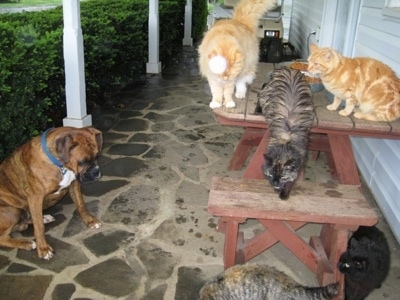 This is what it looked like on the other end of the porch.

Peeing in the Rain 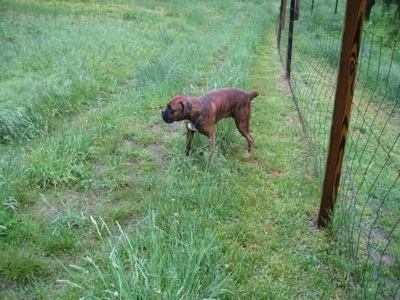 It's been pouring since the middle of the night. In the morning I let Bruno outside to do his business. He never left the porch; didn't want to get wet. I ended up letting him back in. Bruno went to the door. He knew he needed to go outside and go to the bathroom, knew that was what he was supposed to do and felt nature calling him. I opened the front door, Bruno took a step backwards. He didn't want to get wet. It was pouring, yes pouring rain. I went out on the porch with him and let him to the yard. He was getting wet and was so bothered by the rain my commands to "Go Pee" were not even heard. He was walking around the yard as if his feet were touching hot coals. He made his way back to the porch and I let him inside the house. Two minutes later he was back at the front door. Nature was calling again. I opened the door and he took a step backwards. Only one thing to do: I get my raincoat, go outside with both dogs, sprinting off the porch. The dogs chase me as we run to the trail that leads down the pipeline. The thrill of a walk overcame his annoyance of getting wet in the rain. He did his thing. See the brown areas in the grass in the picture above? That's not dirt, it's puddles of water. After the dogs were finished, we sprinted back to the house soaking wet. When the weather lets up, we'll go for our real walk. 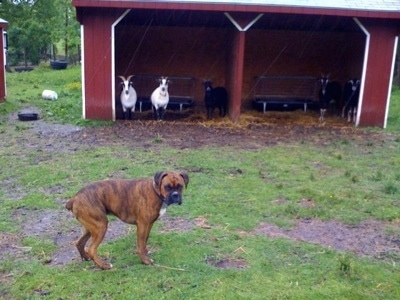 It was 40 degrees and raining. Our oldest goat was shivering. Time to lock her in a stall with two of her friends so she can warm up (goats do not like to be alone). We leash up the goats we want to move and Bruno starts running around as if he wants to herd up the goats with us. "No! Leave it!" Bruno pauses for a second, and then goes back to jumping around at the goats. Words didn't work. I tell Amie to stop walking for a second as I point and step toward Bruno. "Hey!" That did it, Bruno got the message. He follows us to the gate without jumping around like a crazy puppy. When words do not work, body language usually does.

Something New, and NO, it's NOT Yours! 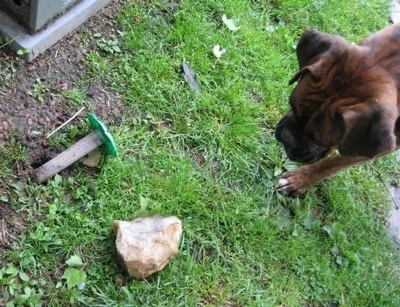 Bruno, this is the third time you have dug that termite insecticide out of the ground. You even moved the rock! "NO, LEAVE IT!" This could be really bad. We have caught Bruno with it, but we have not caught him digging it up. Bruno knows it is bad to have the termite thing in his possession, but he does not know it's bad to dig it up. We need to catch him starting to dig it up. Seems there is always something new we need to teach this pup, no matter how old he gets. 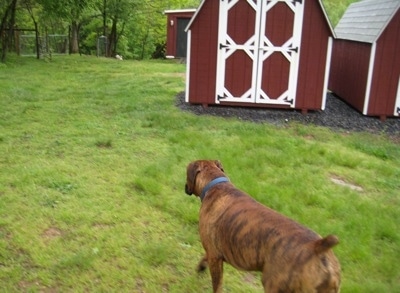 Some kids had stopped by, just passing through the woods. After chatting for a while, the kids were leaving out the back trail that led to the pipeline, a place Bruno associates with going for walks and quad runs. We were standing in the driveway. The kids said their goodbyes and I called Bruno to come inside the house. Bruno looked at the kids, looked back at me; ignoring me, he started following the kids, deaf to my initial call.

Oh you bad puppy.... Instead of screaming at him, I jogged after him, looping around to get in front of him. Pointing at him,"Hey!" Bruno went around me. Those kids were way more exciting than I was and he wanted to go with them. I jogged up to him again taking him by the collar and led him away from the kids, letting go of his collar as we got walking. At any hint of him even thinking about turning around, "Hey!...inside Bruno!" Bruno walked beside me without me holding him, back to the house. "Inside!" I commanded, and he went inside. He could feel I was not going to let him turn around again. I was calm, but determined to make him follow me.

The next morning...I let Bruno outside to go to the bathroom. There was a worker in the field. What Bruno really wanted to do was go to the field. I was a good distance away from him when I noticed he was heading over there. "Hey! No." Unlike yesterday, Bruno stopped in his tracks. I sent him to the grass to go pee. Bruno peed. He looked over at the worker in the field. "Hey, No." Again Bruno responded by coming back to me. As much as he wanted to go, he learned from yesterday I was not going to tolerate him not listening. Bruno went back inside the house as I asked him to do. What a good puppy...

Running in the Rain 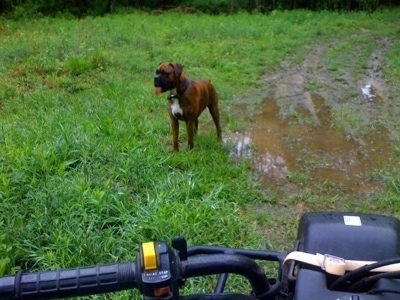 It's been raining for days and was still raining when this picture was taken, but that didn't change the fact this pup gets a little wild inside the house when he does not get enough exercise. I decide to take the quad. If we are going to be in the rain, I'd rather run him and tire him out quicker, and avoid getting my feet muddy. 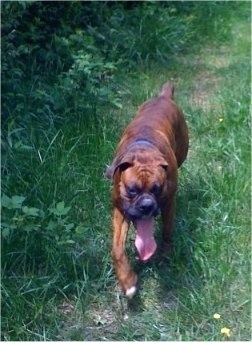 Oh Bruno, it's 75° F and you’re already getting hot on our hikes. What are you going to do when summer comes and it's 90° F? 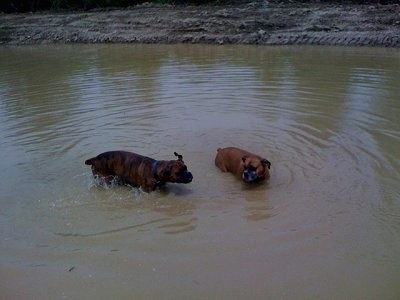 One thing I know this pup will do is take a plunge in the newly dug pond. The water should even have cleared up by then.