Raising a Puppy: 45th week in his new home

A day in the life with Bruno the Boxer puppy. Bruno's forty fifth week—51 weeks old, 85 pounds, 24 1/2 inches from the ground to the highest point of the shoulders (the withers). 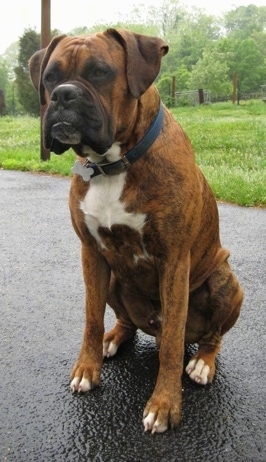 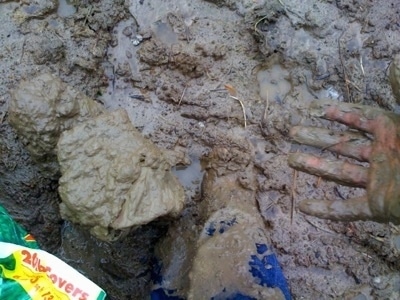 It had been raining all night. When the rain let up, I went out to spread some grass seed around the new pond when suddenly my entire foot sunk in the mud about 12 inches. I pulled my foot out, but my boot stayed. I could not even see it. It was gone, stuck down deep! I contemplated leaving it down there. This was my favorite pair of boots. I reached my arm down into the thick mud hole and felt around. Yes, I feel it, and I pull, hard. Finally! My boot! I am standing there in my bare foot, it’s 55° F outside and starting to rain again. My favorite boot is caked in mud and I don't even know where my sock is at this point. What to do.... 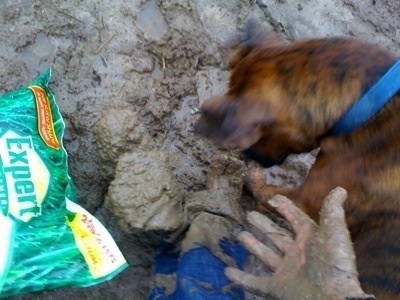 As I am standing there with an unrecognizable boot, mud all over my foot, up my leg and mud all over my arm, feeling a bit distressed, Bruno suddenly shows up. He had been wandering around the grassy area, sniffing around with some cats. 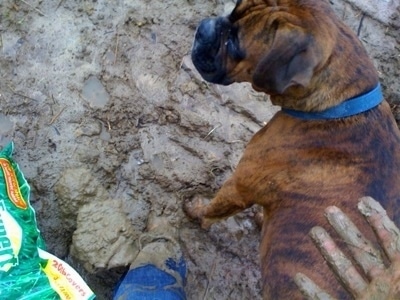 Bruno just stood there, very close to me, waiting for my next move. Funny thing is, I go into this field all of the time. Walked around this pond a lot with him. He's usually off doing his own thing. I had not called him to me. I had not said much at all. I was just standing there, thinking “what to do.” I looked at Bruno and realized he felt my distress. Bruno, you’re one all right pup, you know that? I open the bag of seed, walking around ever so carefully with one bare foot, carrying my phone, keys (yes, I had my keys with me) and the bag of grass seed with my clean hand, spreading the seed with my muddy one. The entire time Bruno stayed right next to me. He had grass seed all over him by the time I was finished. I pick up my muddy glob of a boot with my caked-on grass seed hand and walked back to the house to hose off.

Running in the Rain 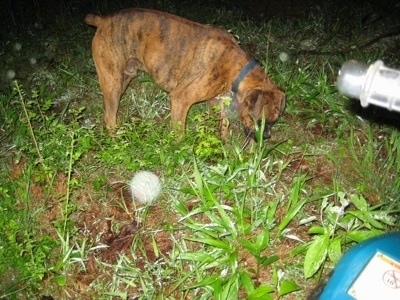 The fact that it has been raining for two days didn't stop that fact this pup needed to get out and run. He was going stir crazy inside the house. Rain or no rain, it's time to take the pup out for a run. The rain had slowed to a misty drizzle, so it was off on the quad. Bruno sure does get happy when he hears the quad start up! 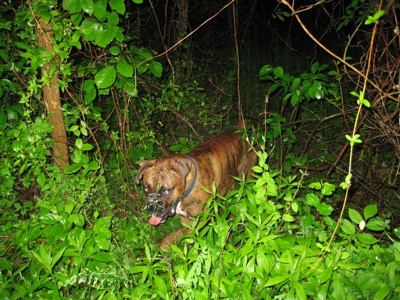 I am starting to realize when Bruno is off running with the quad, he is not just running, he is looking for something. Every so often he wanders off the trail with his nose to the ground, then speeds back up in a full sprint to catch up. It occurred to me he is searching for the fox. 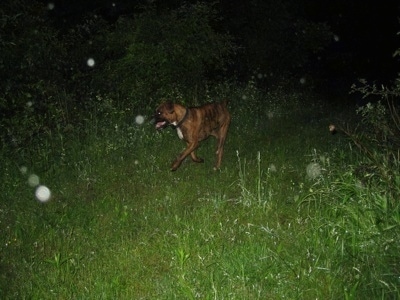 Yep, just like he does on our hikes, Bruno thinks he is out on a hunt. Bruno never gets the fox, but he knows it's something to be chased away. We have been keeping the birds in for a few days, because twice, in broad daylight, I actually saw the fox about to nab a guinea fowl. In both cases, I had to come running at the fox in order to chase it away and the fox was not too afraid of me. He'd run a bit then stop, turn around and look at me. I had to get pretty close to get him to leave altogether. Both times, the fox was only a few feet from the squalling birds; very close calls. The way the fox was going at them reminded me of a game of tag: birds everywhere and the fox was “it.” 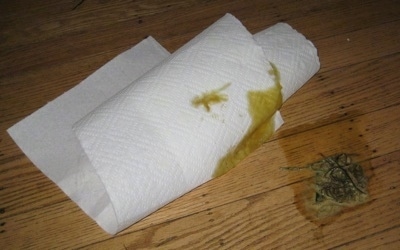 Bruno, why on earth do you keep eating grass? You just puke it up later. Yuck!

The Fox and the Cat Food

Every night, after everyone had gone to bed but me the dogs would want to go outside, then back in, then outside...I was getting pretty annoyed. What's with you guys, anyway? I started telling them "NO" and sending them back to their dog beds. They would listen, but Allie was often overwhelmed with wanting to go out. She'd lie there waiting for me to move a muscle then she'd perk up, staring at me as if to say "Can I go out now?" I felt she was trying to tell me something. I'd open the front door and both Allie and Bruno stand there with major anticipation, wanting to RUN, but they wait for the command with the door wide open, and when I say "Go" they bolt out with lightning speed. Something was up with them, but what? They get plenty of exercise daily and are calm all day long. It was at night, when all was quiet, they would start up.

I decided to try and find out. Allie started at it, crying to go outside. Bruno does not whine, but he gets up and wants to go out too. I walk over to the door and both dogs stand there with the door wide open. "Go!" I give the command and they both bolt.... This time I follow them. They run around the house and toward the horse field. As I pass the table where the cats eat I see it...footprints. Too big for a cat, yet they look like cat prints. The bowl of cat food is completely gone, except for a small portion shaped like a quarter-moon. When cats eat, they leave crumbs and they do not clean the plate with such perfection. The fox...Allie was trying to tell me the fox was on the porch! 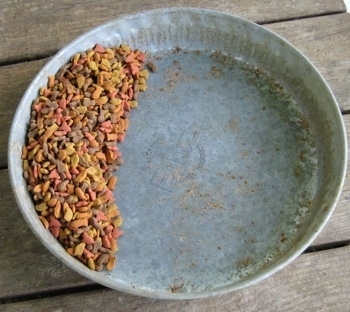 I wanted to confirm this. The next night when Allie started wanting outside, instead of letting them out, I walked to the window and sure enough, there he was! 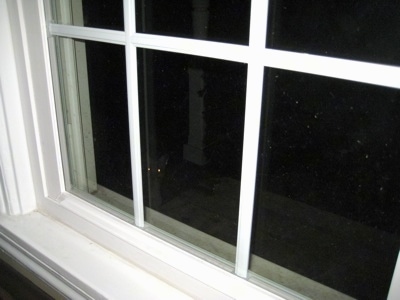 The fox was eating the cat food! Somehow the dogs know when the fox is close. I have started bringing the cat food inside the house at night and putting it back out in the morning. It's dangerous to have a fox hanging out on the porch because it will eat small kittens, not to mention our birds. To feed the fox on the porch is teaching it to stay close to our house, and in return it will teach its pups to stay close to the house. All of our birds and smaller animals will be in danger. 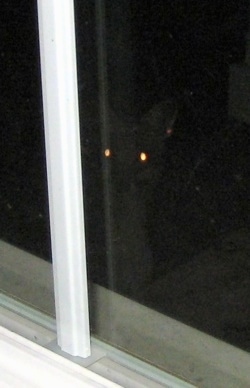 But he sure was cute. He just stared at me through the window. I snapped a picture and he ran off. Too bad the camera picked up on the window pane rather than the fox. I lightened this picture in Photoshop as best I could so it would show more than just his glowing e 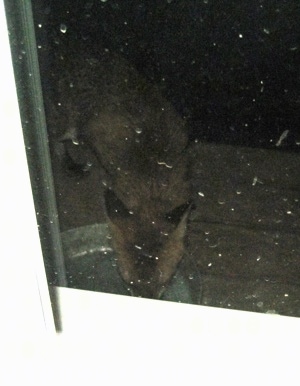 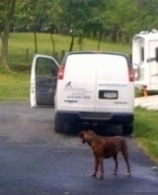 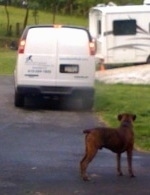 I am very happy with Bruno's manner regarding strangers who show up at the house. He is friendly, calm, quiet and does not jump.

Bruno is happy to see the guy come to fill up the oil tank, the postal worker, UPS, FedEx, Schwann's, you name it—he walks up to calmly greet them. All of the regular delivery personnel look for him and comment on how nice a dog he is.

The only time Bruno gets over-excited is when someone shows up with another dog, or they talk to him with excitement in their voice. He still does not bark or jump, however his tail wags harder, and for a Boxer that means his entire back end moves, and he may try and get into someone's car if there's another dog in it. Compared to some dogs I have seen, he's not horrible, but he does get excited. 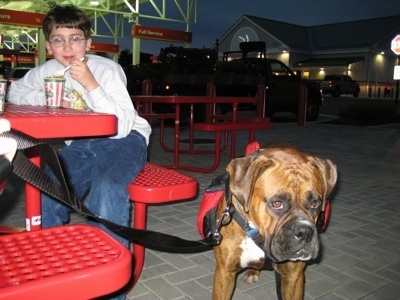 Bruno walks the town with Eric. We end up at Rita's. Bruno is watching all of the other people who are ordering their water ice. 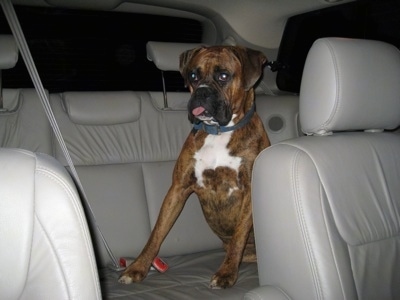 Bruno on his way back from the walk through town