Raising a Puppy: Ninth week in his new home

A day in the life with Bruno the Boxer puppy. Bruno's 9th week—15 weeks old, 32 pounds, 18 inches from the ground to the highest point of the shoulders (the withers). 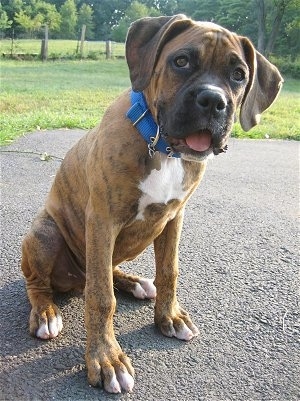 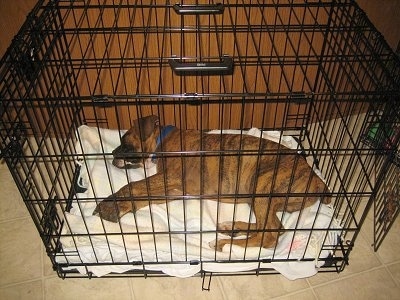 Bruno's gone and done it again...he's outgrown his crate. Time to switch to a larger one. 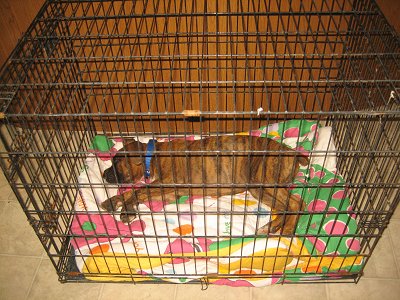 Much better. This little puppy is growing like a weed! I decided to teach Bruno a "get in your crate" command. It only took two days for him to understand the command. While leading him to his crate I started saying, "Bruno Cage! Bruno Cage!" After doing this only a few times I noticed Bruno understood what I was asking. I had just let Bruno inside the house and Bruno was heading back to his dog bed in the living room when I stated, '"Bruno Cage!"—he turned from the direction of his bed into the kitchen and walked into his crate. ;"Good Boy, Bruno! Good Boy! Goodnight, Little Buddy."Bruno lay down and went to sleep. He's been sleeping through the night since he was 12 weeks old.

Well, at 15 weeks and 4 days old, I realized Bruno had peed in his crate, something he has not done in three weeks. It is not normal for a dog to pee where he sleeps. Something is not quite right with this. In Bruno's case I know what it is; Bruno's mother died giving birth to his litter and Bruno was raised solely by humans who did not keep the puppy area clean enough. Therefore, there are certain things he never experienced and learned like other canine puppies do. He got used to sleeping in waste. This is going to take some time. So far, so good in regards to going inside the house on the floor, because I caught him in the act. I never caught him peeing in his crate.

Still no accidents in the house or inside the crate since he was 12 weeks and 3 days old. When Bruno has to go to the bathroom he walks to the door and just looks at me. I still do not know what would happen if I was not right there to open the door. Part of me wants to get a bell and teach him to ring it, however I do not want to teach him to scratch the door. I need to figure out if there is a place to hang the bell where his big paw will not ruin anything and I need to decide if I always want a bell or if I want to teach him to bark or whine at the door. I may go with the barking or whining.

Not Feeding his Fear 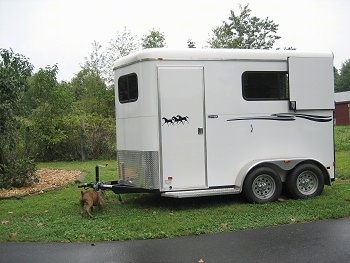 Bruno was under the horse trailer. The pony and the horse were tied to the trailer so we could brush them. The pony pawed at the side of the trailer which made a loud bang. Bruno bolted out from under the trailer and came running toward me with obvious fear in his eyes. I happened to have been walking back toward the trailer at that time. He ran to me for protection. I totally ignored him, walking past him up to the horses. He turned and looked at me, sat back down in the driveway and calmly watched for a few seconds. Then he got up and went back to the trailer and lay back down. My human instinct was such that I wanted to tell him it was OK, give him a hug and explain it was only the pony kicking the trailer and it would not hurt him. However, Bruno is not human, and he does not understand words and reasoning; he's a dog who lives in the moment. If I had reacted in that way it would have fed Bruno's fear. Dogs live in the moment and at that moment he was startled—you do not reward 'startled' with affection. By ignoring him, I allowed him to get over it in a matter of seconds. Had I fed his feelings with affection I would have been on my way to having a dog with some skittish tendencies.

Yikes! I looked out the window and Bruno was chasing a flock of about 14 guinea fowl and boy did he look like he was having fun! I immediately went outside, quickly and calmly walked closer to him without saying a word. I wanted to get closer so I would have more control after my correction and since Bruno is still pretty slow and was not catching any of them, I knew I had time. I got as close as I thought I could get away with and still correct his behavior at the moment it was happening, "AAAttttt!!!!! Bruno, NO!" Bruno stopped in his tracks. I walked closer to the guineas hoping Bruno would follow so I could correct his behavior again, however he sat down in the grass and just watched me. I called him to come and had him walk past the guineas knowing he would react to my "AAAtttt" if he proceeded to look like he "wanted them." Bruno was keeping his distance, so I decided it was time to go and get the leash. 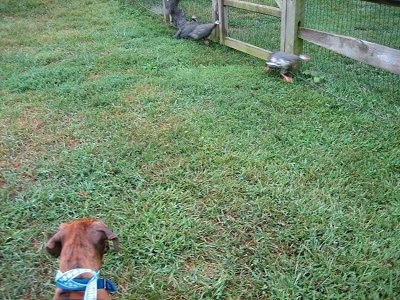 I put the leash on backwards so it acted like a collar and a leash but higher up on the neck where I could have more control. I walked Bruno past the guineas over and over. Every time he got the "I want to get 'em!" look I gave him a short sideways tug on the leash without saying a word. In the picture above he had walked slightly ahead of me and was just starting to give the look and pull tight on the lead. I gave him a sideways tug to distract his mind back to me. 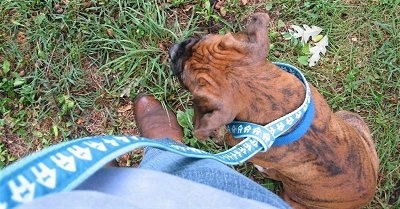 This is what I allowed him to do; sit beside me watching but relaxed. Notice there is no tension on the lead. He's curious, but he does not have the look that says “I want to eat those birds.” If he was just looking at them with a normal relaxed expression I didn't do anything, but the moment he would get that look or stance, I would give a tug. 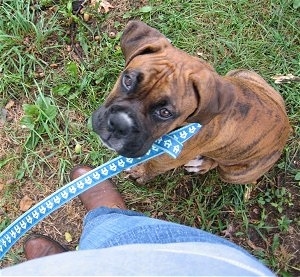 He would stop and sit down, often looking up at me. It got to the point where Bruno just wanted to sit and watch quietly. I then led him to the driveway to practice mastering the walk...

In the past, my walks with Bruno consisted of him pulling in front of me, and me trying to pull him back and slow him down. I was getting a bit discouraged because I wanted him to stop pulling. He was just a puppy and not pulling very hard, however I knew he was growing like a weed and soon would be very strong. As it turns out, my pulling him back was putting tension on the lead and was only intensifying his urge to pull. What I now do different:

After we came back inside Bruno was mentally and physically beat. He plopped down on his bed for a long nap.

Later on the same day...Bruno awoke from his nap and I let him outside. All of the guineas had flown back into his reach once again. I looked out the window and saw Bruno sitting on the porch, relaxed but watching them with curiosity in his expression. A few minutes later I looked out again. Bruno was no longer sitting there. I quietly walked outside to check on him. He was further up the driveway. A guinea quickly ran by him. Bruno stood up. I was too far away to read his expression so I waited just a second. I didn't want to correct good behavior. I am glad I waited...Bruno sat back down and calmly watched. I still do not completely trust him around the birds and maybe I never will be able to, however I can make the situation a lot better by staying on top of him.

Beware of Those Kisses 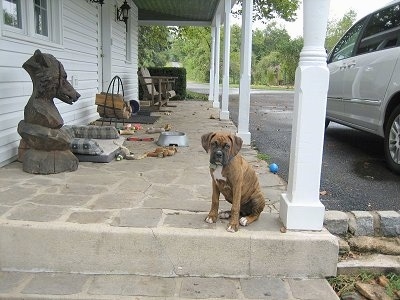 I was outside throwing some bird seed to the birds when I turned back toward the house and there he was. Bruno was calmly sitting on the porch by the steps, watching me with that adorable wrinkled face. I went over to him and bent down for a hug. Bruno began to lick my neck. That's when I smelled it. "Yuck! Bruno, you were eating poop!" Time to go and wash up!

That's Not a Toy

Bruno was inside the house playing with his toys. I looked over and saw him on top of one corner of his dog bed while he proceeded to pull the other corner of his bed up into the air. He was apparently mistaking his dog bed for a giant stuffed toy. It took one assertive, but not angry, word to stop him, "Hey!" Bruno stopped and stared at me. I didn't say anything else; I concentrated on holding in my laughter. That was all it took, he stopped acting like a nutcase and decided to take a nap. The fact that Bruno responded so well shows signs that he considers me his pack leader. If he were to have ignored me, I would have to re-evaluate my human to canine leadership skills. 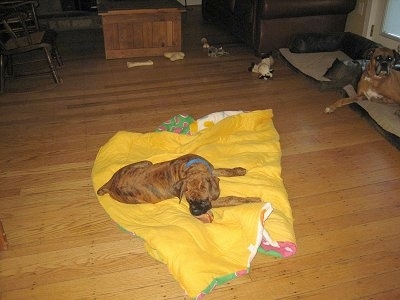 I left both dogs inside the house for only 15 minutes while I went to the school bus stop. When I returned Bruno was happily sitting on top of his dog crate blanket in the middle of the living room, chewing one of his toys. That would have been a sight to see, Bruno removing that large blanket from his dog crate and dragging it into the living room. Not something I want him doing, however I didn't catch him in the act so I cannot yell at him. Had I yelled at him he would think chewing his toy and/or lying on the blanket was a bad thing because that is what he was doing at the moment I found him—lying on the blanket and chewing his squeaky hamburger toy. To teach him not to remove the blanket I need to correct him while he is in the act of beginning to remove it. The most effective time to correct him is right in the beginning when he is about to start dragging it or as soon as I know he is thinking about it.