We have only had the puppy for four days and he is now only 7 weeks old, however, I already I see the importance of teaching the pup basic commands—Sit, Stay and Come. Until I do this, Bruno will not know what it is I want from him. 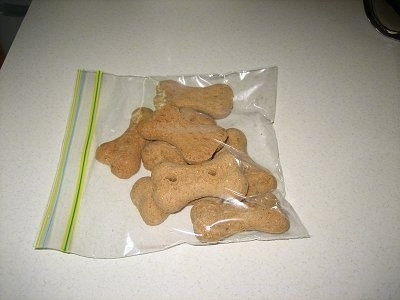 In order to teach Bruno some basic commands I needed a reward for him, something other than his dog food. I put some Milk Bone dog biscuits in a plastic Ziploc bag and beat them with a spoon to crush them in tiny pieces. Bruno is still pretty small and one of those bones would not only take a really long time to eat, but would fill his tummy and make him no longer interested in the reward. 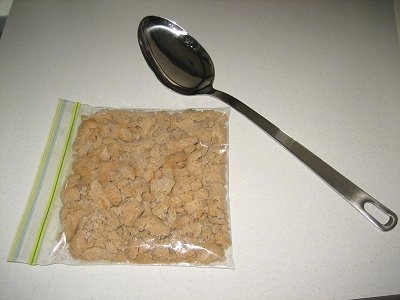 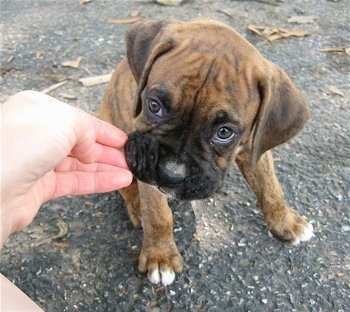 I took Bruno outside and began to teach him how to sit, the first command all dogs should learn. Bruno did OK, however he was very distracted with the things going on around him, so I took him inside to the kitchen floor to finish our first lesson.

Inside the house, without the outside distractions, I quickly realized that was not the only thing from keeping Bruno's complete attention. The dog biscuits were not going to work as his reward. He was just not interested enough in them. Clip of Bruno the 7 week old Boxer puppy not interested in his crushed dog bones.

It was time to switch to something tastier. I decided on tiny bits of cheese. This got his attention! I only gave him tiny pieces because I didn't want to upset his stomach and he was happy with what I was giving him. Watch the difference in this video clip. Notice how I have this pup’s attention simply by switching the treat I was using. Watch his progress and how he obviously starts to understand what “sit” means. Bruno the Boxer Puppy Learns To Sit

After Bruno has picked up on what "sit" means, it is time to teach the puppy the "Stay" and "Come" commands. Sit, stay and come go hand in hand. Sit should always be the first command taught; the pup/dog should always be in the sitting position in the beginning stages of teaching it how to stay. Stay and come should be taught at the same time.

Notice how calm Bruno is in these video clips. I purposely started our training when he was on the tired side so he would be less hyper. I have trained some pretty hyper dogs in my day and the key is to get their attention and use hand signals. Wave the treat in their face to keep the pup’s attention and keep the training session short. Read more about Training Your New Puppy Basic Commands.

In the beginning when teaching a puppy how to sit, stay and come, I do not move very far away from the dog. However, as they improve, I begin to move farther away and eventually can disappear out of the dog’s sight and still have it obey the command.

Bruno did well and by the end of our short session made some good progress. I will have to go over these commands with Bruno several times a day in short sessions for the next week or so. Most dogs have a very short attention span, and it is not wise to have long training sessions. You will get more out of several short ones rather than one long one.