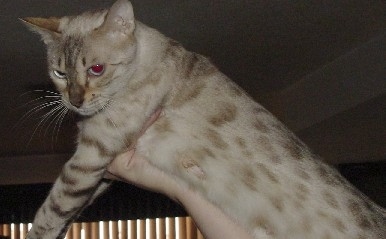 A medium to large cat having a belly flap, hind legs slightly longer than front legs, very muscular, medium slightly oval head and medium to large rounded ears. Short to medium length tail, bobtail permitted. The head is slightly wedge-shaped, chin forms a perpendicular line with the upper lip. The eyes are large ovals, slightly slanted at the ends and set far apart. The ears are medium to large in size with a wide base and rounded tips; ear tufts allowable. The nose is broad and short, a square muzzle with prominent whisker pads and solid color nose leather in brown, black or pink. The legs are medium in length although the hind legs are longer than the forelegs. Strong bone structure, paws wide but firm, up to two extra toes on each paw.

Short, sleek pelt, each single hair showing a clear ticking in the basic color as well as in the spots. Ticking is inalienable but not so dominant that the spots disappear.

Average litter size is 1- 3 kittens, one to two times per year.

The Mojave Spotted is a breed of cat developed for the purpose of preserving the wildcats of the Mojave Desert. The Mojave Spotted, originally named the Mojave Desert Cat, was first discovered back in 1980 by April Langford. In 1980 the first colony of wildcats was discovered living under the thick desert shrubbery in deep borrows that were used for the purpose of sheltering the cats’ offspring from the harsh desert weather. It is not known as to how these burrows were dug—possibly by other wild animals or by the cats themselves. Colony size was never noted but there were at least six adult cats to each colony found. First colony was found in a small town called Hesperia, located in Southern California. Each cat that was observed resembled one another down to the very specific spotted pattern, including body structure, but color did slightly vary from one cat to another. Colors ranged from silver, brown, gold agouti and black between the different colonies. Soft sleek pelt, spots occurring over sides and flanks, heavy ticking but does not cause spots to become lightened. Dark bars on the neck, legs and tail. Spotting on belly, cream color on belly and face, prominent light-colored whisker pads. These cats were larger than an average house cat, having a larger bone structure and large, lynx-like paws in mitten shape, almost resembling the local wild Bobcat. It is not known as to the possibility of the two species being related or not but they did seem to resemble one another. Lifespan for an average adult cat is unknown. A study shows these cats survived on a diet of live birds, desert mice, lizards and insects. Predators are the coyote, mountain lion, dog packs and man. In 1984 a litter of Mojave Desert kittens was found abandoned beneath a large juniper tree; they were ice cold from the approaching winter and starving. It seems as though during colder parts of the year food sources were very low and if the queen had trouble finding the food she needed, she would just abandon her young. The first litter found was rescued and supplemented with a Kitten Milk Replacement (KMR) formula and raised indoors but would never tame because of their wild heritage. After several years the wildcats became more and more scarce. By 1990 people from all over began to come to the small desert town and the cats started to slowly disappear. By this time the breeding program to preserve the Mojave Desert cat had already been underway. It was such a shame to see these beautiful cats vanish without a trace, so by taking this into serious consideration the Mojave wildcat lives to this very day but in the homes of the people who helped save it. The most important thing to be taken into consideration in the study of these cats was the untamable nature of the cat, even when raised in a completely human environment; this was something that would need immediate attention in order to keep them in captivity. Each generation is born more and more exotic looking and more affectionate to their human friends. For the next few years the Mojave Spotted will be outcrossed to the Bengal, other Mojave Gen. 1 cats and polydactyl variations to produce larger, heavier built cats. Outcrossing did not start happening until 1996, but to no disadvantage; it was a success. Not only did the Bengal produce more pronounced spotting but also gave the Mojave a more brilliantly soft and glittered pelt. The Bengal only added a few extra features to better the breed color–wise; in no way did this breeding take from the already beautiful wildcat's appearance. In 2007 the Mojave Spotted will be bred true without having to outcross to any other breed. Cheshire Cats Cattery is the only existing cattery to own and breed this rare and beautiful wildcat native to the deserts of the Mojave. There are no other breeders who have access to the Mojave Spotted; all kittens resulting from the breeding program have been placed in spay/neuter homes thereby preventing the novice from using the Mojave in a way that would cause a threat to the breed. 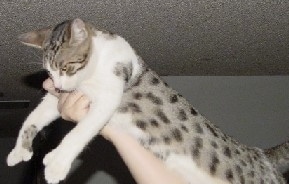