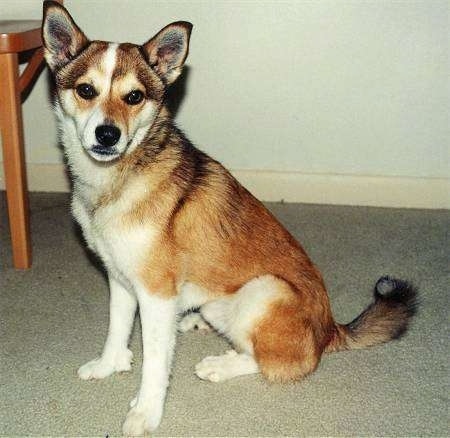 The Norwegian Lundehund is a rectangular spitz dog, small, comparatively light with distinct secondary sex characters. The Norwegian Lundehund possesses some odd characteristics which other breeds do not. It has six toes on each foot, including two dewclaws. It has joints in the nape of the neck, which other dogs do not have. It has extremely flexible shoulder joints. The medium-sized erect ears have more mobility than the average dog. The eyes are brown and fairly deep-set. The head is small and wedge shaped. It has moderately muscled hindquarters suitable for agility rather than speed. The legs are strong. The tail is carried ring-shaped, or slightly rolled over the top line, or hanging. It has a short, rough, stand-off coat. Its dense topcoat lies flat against the body. The coat can be reddish-brown to fallow with more or less black hair tips, or black, or grey, all with white markings, or white with dark markings. The full-grown dog usually has more distinct black in the outer coat than the young dog.

Norwegian Lundehunds are friendly and love people. They are not aggressive and will snuggle with people or other dogs for hours. They love to play and will enjoy long sessions of it. Curious, they are ready to explore the world. This breed is intelligent and can be trained for agility. Because of the Norwegian Lundehund’s very unique characteristics, it makes an exceptional hunter. Its six toes on each foot, including two dewclaws, allow the dog to climb steep areas; the extra joints in the nape of the neck allow the dog to turn its head at a 180-degree angle; it has extremely flexible shoulder joints; and its ears have mobility which other dogs do not have. Consistent crate training is mandatory. A doggy door may have to be used. The Norwegian Lundehund is somewhat primitive and can be extremely difficult to housebreak. Some owners say they never do get their Norwegian Lundehunds housebroken. The key is thinking two steps ahead of a puppy that has to pee. From having many puppies in my house, I know that giving a puppy the run of the house is just asking for disaster. If you're not watching him, he's in his crate or outside. Crate training works well with this primitive breed, because they still have a strong den instinct. As soon as he comes out of the crate, as soon as he's done eating, as soon as he wakes up in the morning, he goes outside! Or somewhere where he is allowed to pee. A Lundie puppy will learn much better if he is never given the opportunity to do badly. The Norwegian Lundehund is usually good with children. It doesn't mind having its ears or tails tugged, especially if it's by others in its pack. So long as they are introduced to each other in a positive environment, the Norwegian Lundehund will grow into a great family dog. They are friendly with other dogs. Most love to meet others of their species. This breed is usually good with other pets if raised with them. Lundies were bred to hunt, and hunt well. But their quarry was puffins, so unless you have a fish or water bird, it may be alright, however be sure to carefully introduced the animal to them, using your best judgment. This breed usually prefers his own family to other people, and has a tendency to be shy of them, but not aggressive. Socialize this dog well. The Norwegian Lundehund needs a firm, confident, consistent pack leader. Without one, he will be stubborn, obstinate and demanding. He may also become an obsessive barker, as he tries to tell you what HE wants YOU to do. Consistency is a must with this breed. You must show it that you mean what you say. Do not allow your dog to develop Small Dog Syndrome. Do not treat them like little humans. Remember they are canine animals. Provide for them what they instinctually need as that animal. If you do not socialize this dog, and meet all of his canine instincts, he may develop a distrust with anything new or different, which can result in excessive alarm barking. It is important you take your dog out for daily pack walks. Although to some they can seem stubborn, enthusiasts say that it is the traditional training methods that are at fault, not the dog. They need discipline, however, very harsh discipline will never work on this dog. If you can find someone who knows about or breeds Lundies, it shouldn't be much trouble at all to train them.

Prone to Leaky Gut Syndrome, Lymphagetasia, Lundehund Syndrome (a series of digestive problems). This unique syndrome renders the lifespan of a particular dog almost unpredictable if not fed properly. It is reported that it is not a disease but an inability to digest grains of any sort. Fed a diet with no grains, the dogs do not get sick. They need only the same care that any dog should get and they live a long life. This syndrome or allergy is under research.

The Norwegian Lundehund would do best living in a house with at least a small, fenced-in yard.

The Norwegian Lundehund needs to be exercised every day with a long daily walk or jog. In addition, it will greatly enjoy sessions of play.

The Norwegian Lundehund is easy to groom. Comb and brush regularly with a firm, bristle brush, paying attention to the undercoat. Bathe or dry shampoo only when necessary. This breed is a heavy shedder. 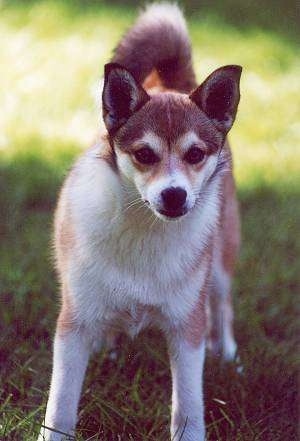 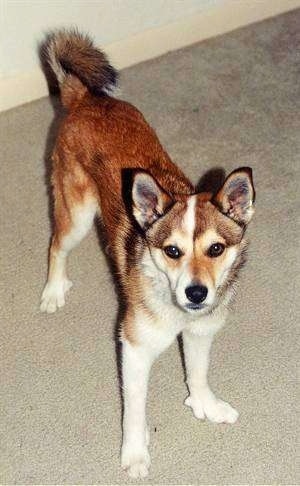 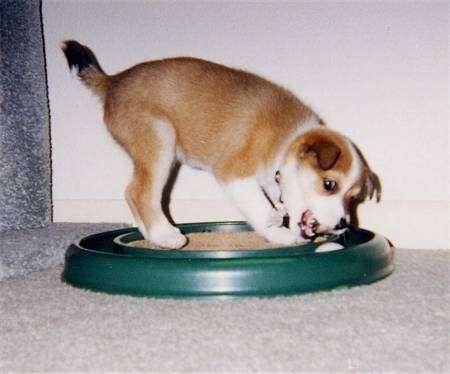 Lynk the Norwegian Lundehund as a puppy