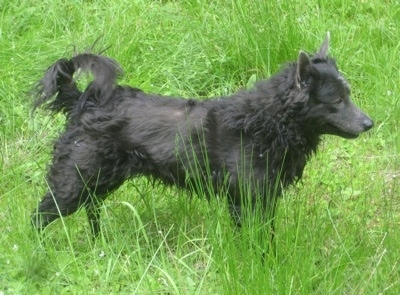 "Quetzalcotl Smoke, a 2-year-old gray Mudi. Mudik are extremely fast and needs lots of room to run. Mudik are a tough breed used to herd sheep, pigs and cattle."

The Mudi has a wedge-shaped head with a pointed nose. The jaws are muscular with a scissors bite. The skull is convex with a well-marked stop. The eyes are oval and dark brown. The ears are erect in the shape of an upside-down "V". It has a deep thorax. It is not unusual for the puppies to be born without a tail. The back is straight and rather long. The hind legs are surprisingly wide set. The hair on the muzzle is short, becoming bristly toward the ears. Its dense, wavy to curly coat is about 2 inches (5 cm) long with glossy hair that forms tufts and easy to care for. Coat colors include black, white, red, brown, gray, bread-pale and fallow. There is also a very rare color called "cifra" (blue-merle), which is dark or light gray and mixed with a black, spotted, striped, stained, marbled color. (The potential coat colors are actually limitless with this breed.)

The Mudi is truly a rare dog. The few owners who employ and favor the Mudi find him incomparable. His seemingly unending list of talents combined with his pleasant disposition makes him a top dog among canines. Highly intelligent, the Mudi can learn as quickly as a Border Collie or even faster. Extremely powerful and courageous, the Mudi is afraid of nothing, not even wild boar, which it can overpower quickly. It makes a good guard dog. It is very loving and gentle in the family and has therefore gained appreciation as a companion dog that, if the need arises, will defend both property and person. Within the family it also has a tendency to bond with one particular person. Mudik can be wary of strangers. Socialize them well, preferably at a young age. Some will not come up to a stranger until it sees that the person is friendly and doesn't want to hurt it. They are not aggressive when they meet someone they do not know; they just need to get accustomed to them. They will do okay with children if they are treated in such a way that they see humans above them in the pack order. Mudik are friendly with other dogs and will be okay with non-canine pets if they are raised with them from puppyhood or properly introduced as a new pet in the home. It is an obedient and playful companion, but can sometimes be noisy. They need to be taught not to bark unnecessarily. Mudik will do very well with a job to do. They need an owner who knows how to properly communicate the rules and one who has time for daily exercise.

This is a fairly healthy breed, although some cases of hip dysplasia have occurred, but not many.

The Mudi can live in an apartment if it is sufficiently exercised; however, it needs space to run and play and would do better if not kept in one. This breed is moderately active indoors and will do best with at least a large yard. This breed can live outdoors.

The Mudi is a very active breed. It needs to be taken on a daily, long, brisk walk or jog, where the dog is made to heel beside or behind the human holding the leash, as in a dogs eyes, the pack leader leads the way. In addition, your dog will benefit from a large, safe area where it can run free. Mudik need a lot of running and other exercises to be in good condition. They love to play and will excel in all kinds of sports such as Flyball and Frisbee.

The Mudi is easy to groom. An occasional combing and brushing to remove dead hair is all it needs. This breed is an average shedder.

The Mudi's full name is Canis Ovilis Fenyesi (Dr. Dezso Fenyesi separated Mudi from the Puli and Pumi). The Hungarian herdsman's dogs were all classified together until the 1930s, when the Mudi was separated from the Puli and Pumi. This all-purpose rural breed does not appear to be the result of planned breeding. The breed formed spontaneously and is only about one hundred years old. It is rare, even in Hungary—its country of origin. Its conformation stabilized in the early 1900s and its standards were written down according to these original traits. Perhaps much of the reason for the rareness of this breed can be attributed to the ever-present Puli and Komondor—older and more popular Hungarian working breeds. Perhaps the least known of all Hungarian dogs, it is noted for the multiplicity of its uses both inside and outside its native land. It has served as a flock guardian, sheep herder, cow herder, guard dog, hunter of wild animals, killer of mice and weasels and as a companion. He is capable of handling his own flock without the assistance of a third paw. In Finland they are used as mountain-rescue dogs. Without the intervention of dedicated breeders, it would be in danger of extinction. 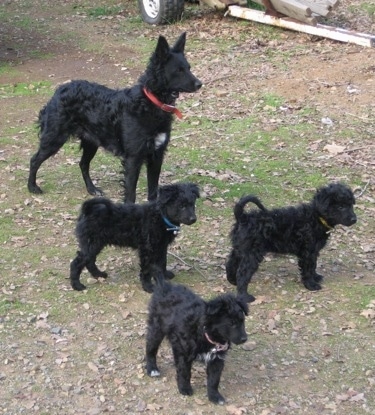 "Erika de la Croix Bernifa was born in Belgium and brought to the U.S. in 2006. She is expecting her second litter of puppies in August of 2009. There have been less than 10 litters of Mudi puppies born in the U.S. in the past 10 years. She is shown in this photo with three of her six puppies." 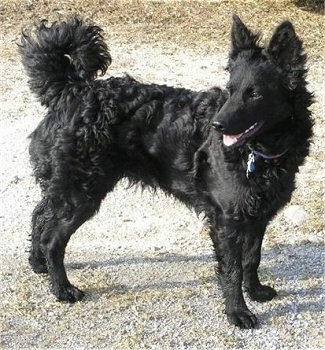 This is Savvy at 9 months old. Photo courtesy of Linda Reynolds, VerMudi Kennel 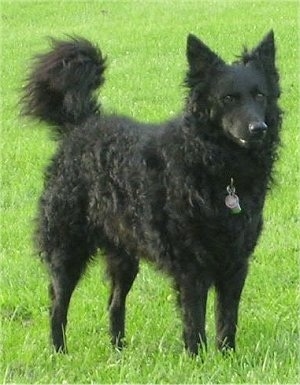 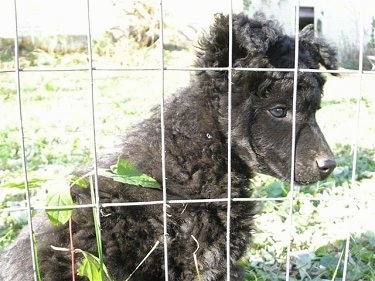 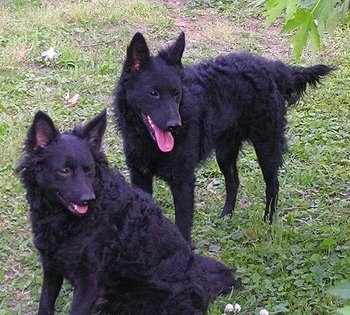 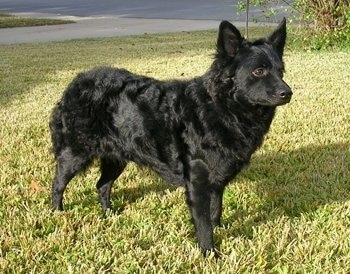 See more examples of the Mudi