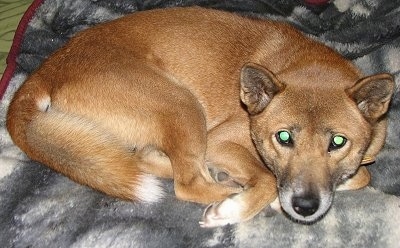 "This is Bear, our intact male New Guinea Singing Dog at three years old, relaxing on our bed. While aloof, he is definitely affectionate and often sleeps on the bed with us. He will also sing if I play a clip of other NGSDs singing. He is very inquisitive and alert. It is a shame that this species has a real chance of being extinct within the next few generations. He is probably one of our most unique animals which include psittacines (parrots) and caecilians (an amphibian that resembles an earthworm or snake)."

The NGSD is a small-to-medium-sized dog of fox-like appearance with a wedge-shaped head, prick ears, obliquely-set triangular eyes, plush coat and a brushy tail. The NGSD is extremely agile and graceful. This breed is presented in a completely natural condition with no trimming, even of whiskers. The coat is average to long in length. Colors include red or shades of red with or without symmetrical white markings, black and tan. White markings are common, but should not form more than one-third of the body's total color. White markings are permissible only in the following areas and may not form spots or patches on the body: Muzzle, face, neck (may extend onto the shoulders), belly, legs, feet and tail tip. The head is fairly broad and the body duly muscular. The jaw structure is more advanced than a Dingo's. The hindquarters are lean and the medium-length tail is soft and fluffy.

The New Guinea Singing Dog is not like your average domesticated dog and is not recommended as a house pet for most people as it is closely related to a wild dog. If properly socialized, it can be tame enough to tolerate the handling of humans, getting attached to its owners. The NGSD’s most unique characteristic is its dramatic ability to vary the pitch of its howl. They do not bark repetitively but have a complex vocal behavior including yelps, whines and single-note howls. NGSDs are active, lively, and alert. They are constantly exploring everything in their environment, using all five senses, including taste. Their incredible structural flexibility allows them to pass their bodies through any opening wide enough to admit their head. Their hunting drive is very intense and may overwhelm any training when prey is detected. They use their acute sense of hearing in addition to sight and scent to locate prey. Although gentle and affectionate with people they know, they can be aloof with strangers. NGSDs can be aggressive toward other dogs, especially of the same sex. Its howl has an eerie yet synchronized quality, which gives the breed its name. The howl can be spurred when the dog is disturbed or excited. One tone blends with the next, sending goose bumps up a listener's back. Opera singers have expressed a particular interest in this vocally skillful canine. This is a hardy and well-balanced dog. The Singing Dog is similar to the Dingo, although smaller than its near relative. It possesses the erect ears and is a swift hunter with social instincts. Unlike the Dingo, the New Guinea female cycles twice a year in captivity. This is not a dog for most people. The New Guinea Singing Dog has never been studied in the wild and virtually nothing is known concerning its behavior, social organization or general natural history under free-ranging conditions. In general, New Guinea Singing Dogs show all the behaviors described for other Canis species with the exception of the "play bow," typical to most canids but not seen in the New Guinea Singing Dog. The captive populations which have been studied were not observed to have form packs. Wild sightings are of single dogs or pairs. They have a distinctive howl, and emit a "trill," described as similar to a sound made by the Asiatic Wild Dog. As of 2004, there were less than 50 specimens (all highly inbred) in the documented NGSD captive breeding population.

The New Guinea Singing Dog is a hardy breed.

The NGSD is not recommended for most families. It is closely related to wild dogs and is almost extinct. However, there are some fanciers who properly socialize this breed and they say, if done right, the New Guinea Singing Dog can be a very affectionate dog. The Taronga Park Zoo in Sydney, Australia (along with a few other zoos) has a few of these dogs and is trying to prevent them from becoming totally extinct. It can thrive in cold climates and is versatile and adaptable.

This breed needs a lot of physical exercise, which includes a daily walk or jog.

The weather resistant coat of the New Guinea Singing Dog will take care of itself.

The New Guinea Singing Dog is native to New Guinea. Explorers in the 1800s described the varying popularity of the dogs in the lowland villages of New Guinea. In some they were treated as pets, while in others they were abused. By the 1900s, hybridization with imported dogs had made the native lowland New Guinea Dog almost extinct. However, in the 1950s two pure dogs were captured in the isolated Lavanni Valley in the southern highlands, and eventually sent to Taronga Park Zoo in Sydney, Australia. In the 1970s, another pair was captured in Irian Jaya's Eipomak Valley part of Indonesia. Virtually all Singing Dogs in Europe and North America descended from these pairs. This Dingo-type dog is a close relative of ancient dogs that were domesticated from Asian wolves between 10,000 and 15,000 years ago. The breed acquired its name from its howl, which is an undulating and modulating series of tones that blends into a swelling portamento. The musical quality of the sound is unlike that of any other dog, even the most beautiful voices of the scent hounds. Considered the world’s rarest dog, the breed is even rare in New Guinea today. It can be seen in a number of zoos around the world and is kept as a pet by some fanciers. Some call it the most primitive dog in existence. The breed is recognized by the UKC, which allows them to compete in competition. Currently the NGSD is classified as a domestic dog subspecies of Canis lupus, Canis lupus dingo. 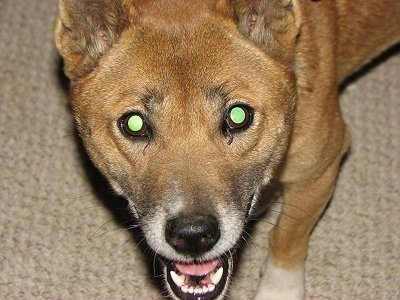 Bear the New Guinea Singing Dog at 3 years old—yYou can see the green reflection of light from his eyes.