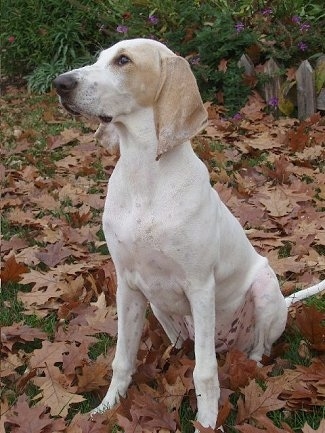 Watson the Porcelaine at 6 months old

The name Porcelaine refers to its shining coat, which makes it look like a porcelain statuette. During its heyday in the 1700s, the Porcelaine was considerably larger than the modern breed of today. It is a very distinguished-looking dog with a finely chiseled head, a black nose with wide-open nostrils, and a flat forehead. Its eyes are dark with a sweet expression. The ears are thin, conical and pointed. The neck is long and slender, and the tail is hefty at the base but narrowing to a point at the end. The skin should be pink with sparse black mottling that shows up through the white coat. From a distance it gives an impression of pale blue glass. The solid white coat is composed of very fine hair of miraculously short length. The color can be interrupted by orange spots on the body but especially on its notable, sizeable ears.

The Porcelaine is an energetic and fierce hunter, but gentle at home and easy to handle. It is good with other dogs and children. This friendly hound is vigorous and tireless with a wonderful sense of smell and a musical voice. It is a hound used for hunting in packs for all types of wild game. Because these dogs hunt together without orders from their owner, they have developed into very independent dogs which are brave and very sociable. This is one of the few French hunting dogs that has overcome the confines of its native land and aroused interest abroad. Given the proper activities and exercise, this is an ideal fellow for the home. Without enough mental and/or physical exercise this dog can become high-strung and/or distractible. If it senses its owners are not as strong minded as itself, it will become a bit willful as it will believe it needs to be the leader of the relationship. It will bark at suspicious noises, but it is not a watchdog. Hunting instincts develop early. Puppies, even at eight weeks old, often display pointing behavior. Proper human to canine communication is essential.

The Porcelaine is not recommended for apartment life.

This breed needs a lot of exercise, including a daily, long, brisk walk or jog. While out on the walk the dog must be made to heel beside or behind the person holding the lead, as instinct tells a dog the leader leads the way, and that leader needs to be the human.

The glossy white coat is easy to care for.

Believed to be the oldest of the French scenthounds, the Porcelaine is also known as the Chien de Franche-Comté, after a former French region bordering Switzerland. Following the French Revolution (1789-1799), examples of the Porcelaine were found at the Franco-Swiss border, leading to confusion over whether it is of French or Swiss origin. However, the breed is recognized as French, and is thought to descend from the English Harrier, the now-extinct Montaimboeuf, as well as some smaller Laufhunds of Switzerland. The breed has been recorded in France since 1845 and in Switzerland since 1880, when the first hunting packs were established. At one point after the French Revolution, the breed actually disappeared but was "reconstructed" and now stands on solid ground. The Porcelaine is mainly used for hunting hare and roe deer in packs and is found mostly in France. They are not known outside France, Switzerland and Italy. They also hunt wild boar (in the north). 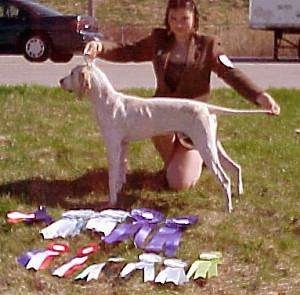