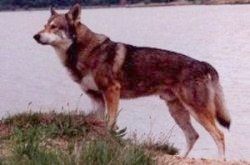 The Saarlooswolfhond has a broad, powerful neck. The moderately broad head is slightly arched between the ears. The erect ears are large like the German Shepherd's. The muzzle has a definite taper to the solid, dark nose. It has long legs with feet that turn slightly outward. The tail is densely feathered and low set. The coat is harsh and not too long with a dense undercoat. Coat colors include agouti, wolf-gray and wolf-brown with limited white markings.

The Saarlooswolfhond is only for the lover of the old canine ways, as it retains in a limited state some of the wolf-like and/or ancient canine ways, including an intense pack instinct, tendency toward shyness, and a need to roam or at least have adequate space. It needs to be taken for daily pack walks to satisfy its instincts. These dogs are exceptionally strong-willed and do not take well to obedience or Schutzhund work. They are still pack-oriented and need a strong leader and a social atmosphere. Not recommended as a child companion. They are not suitable for kennel life. Seclusion intensifies anti-social behavior, and the dog may panic if locked in an enclosure. Owners must establish the dominant alpha position, be willing to spend a great deal of time with them, and train with patience, understanding canine behavior. The breed is quiet, seldom barking, alerting homeowners in other ways. They do well in packs, with a leader emerging and keeping order. That leader MUST be the human. The club's publication notes that most owners of the breed have at least two to provide the necessary "pack." Problems can occur, however, if a dog who does not understand the established order is introduced to the pack. When introducing a new dog into the pack, it is important to first walk the dogs separately to drain excess energy, and then walk them together to help them secure the new order. Be sure you make the dogs heel beside you, rather than walking out in front, as the pack leader always goes first.

The Saarlooswolfhond Association is very strict in its requirements against hip dysplasia, spondylosis of the spine and other health and temperament problems. Casual breeding is discouraged.

The Saarlooswolfhond is not recommended for apartment life. These dogs will do best with acreage. They are well suited for cold climates and can live outdoors.

This breed needs a lot of daily exercise and adequate space. They need to be taken on a daily, long, brisk walk or jog.

The weather-resistant coat of the Saarlooswolfhond should be combed and brushed regularly. Bathe only when necessary as it removes the natural oils in the skin.

In 1921 a Dutch breeder, Leendert Saarloos, began a lifelong experiment to improve trainability in the German Shepherd Dog by introducing zoo-kept wolf blood. The first dog-to-wolf cross was unsuccessful. He thought that the germs which were so debilitating and even fatal to dogs would not affect the wolf, but his theory was immediately proven wrong when the zoo animal died from a virus. Fortunately for his program, the zoo provided another wolf, and his plan began to unfold. Through continued attempts and diligent selection, near success was achieved. Some of his dogs were used as guides for the blind and some attempted to do police work but were not successful. Although trainability was not improved, this breed was recognized in 1975, six years after Leendert Saarloos's death. This rare Dutch breed is easier to train, more amenable to urban life and more responsive than the Czech Wolfdog. This is probably due, in part, to its longer history of selective breeding, but also because the pack-oriented Canadian Timber Wolf, rather than the lone-hunting Carpathian Wolf, has been included in its genetic background. The Saarlooswolfhond can be used as a small-game hunter. It is rarely seen outside the Netherlands. The Saarlooswolfhond Club is almost completely unavailable outside of Holland. This is because the club wants to better control the breed’s breeding and limits the breed to a single 500-mile radius.