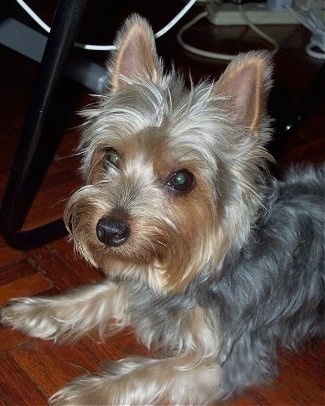 The Silky Terrier, also called the Sydney Terrier, is a small, fine-boned, moderately low-set dog. The body is slightly longer than tall, with a level topline. The wedge-shaped head is flat between the ears, moderately long, with the skull being slightly longer than the muzzle. The stop is shallow and the nose is black. Teeth meet in a scissors bite. The small, almond-shaped eyes are dark in color with dark eye rims. The erect, V-shaped ears are small and set high on the head. The front legs are straight with small, catlike feet. The high-set tail is customarily docked. Note: docking tails is illegal in most parts of Europe. Dewclaws are sometimes removed. The long, silky, single coat is 5-6 inches (12-15 cm) in length and comes in shades of blue with tan or red markings. The hair is parted down the center of the back. It has a topknot that should be lighter in color than the tan or red points. Silky Terriers are born black. The coat is very prone to tangles and mats unless frequently groomed.

This loving, little terrier is very intelligent, courageous and alert. Affectionate, spunky, cheerful and sociable, it likes to be close to its master. It is full of energy and needs a good amount of exercise in order to be calm. Curious and keen, it is an enthusiastic digger. Active, smart and quick. Despite its size, this docile dog makes a good watchdog. This is a sturdy breed that adjusts well to traveling. It is not generally trustworthy with other non-canine pets such as rabbits, hamsters and guinea pigs. Socialize well, including with cats, so it does not chase them. Good with children so long as the dog does not have a meek owner who fails to give him the discipline and structure all dogs instinctually need. Training these dogs is very straightforward because it is very eager to learn. Do not allow this little dog to develop Small Dog Syndrome, human induced behaviors where the dog believes he is pack leader to humans. When a Silky believes it is the boss, its temperament changes, as it tries to control everyone and everything around it. It may become demanding, willful, protective and may begin to bark a lot. It may begin to be untrustworthy with children and sometimes adults, becoming snappish if peeved and may pick fights with other dogs.

The Silky Terrier is good for apartment life. These dogs are very active indoors and will do okay without a yard if sufficiently exercised.

The Silky Terrier is full of energy and needs to go on daily walks. It has surprising stamina and will enjoy regular chances to run and play.

The Silky Terrier is very prone to tangles and mats and needs daily combing and brushing. It should be bathed regularly to keep the hair in top condition. It takes quite a commitment from its owner, requiring about 15 minutes a day. After bathing, make sure the dog is thoroughly dry and warm. The coat must be trimmed occasionally, and the hair on the legs from the knees down is often trimmed short. The hair that falls over the eyes is tied up in a topknot so the dog will be able to see more easily. The Silky Terrier sheds little to no hair and is often a dog good for those with allergies. 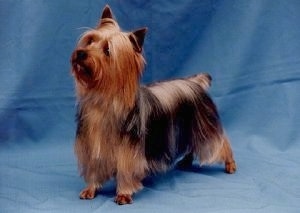 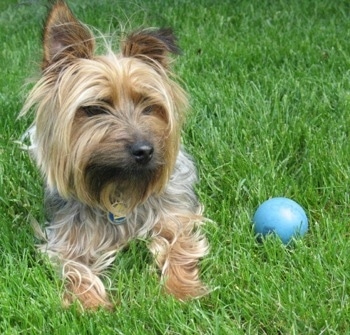 "This is Louie, a Silky Terrier at 2 1/2 years old. Louie was rescued in Feb. 2009. His previous owners surrendered him because he was "too big." Louie weighs in at a whopping 11 lbs. (go figure). His disposition is fantastic—everything you'd expect a young, healthy, smart, obedient, and rambunctious Silky to be. My wife and I are both big fans of Cesar Millan, and watch his show regularly. I've also read much of his information posted on the net. I took this picture during a play session. Louie can't seem to get enough outdoor time. The training information I've learned from Cesar has helped tremulously. We were owners of Yorkie sisters for 18 years, and treated them like children. Not a good idea. When we adopted Louie, I began following Cesar's “Pack Leader” advice. What a difference. He's not only a great dog; he's filled the sizeable hole in our hearts left by the Yorkies we lost." 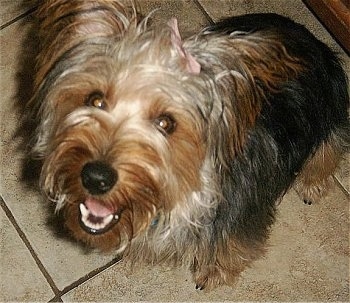 "This is Bella. She is 1 year and 5 months old in this picture. She's loving and smart...but very stubborn! She's a Silky Terrier and thinks she's a big dog.... I love her!" 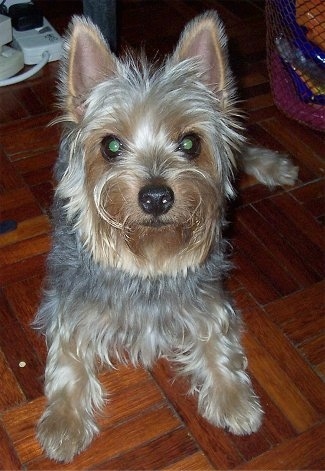 "Introducing Ms. Phoebe, a 2-year-old Silky residing in Selangor, Malaysia. Phoebe lives with 2 cats, an American shorthaired mixed Persian, Golden Boy and a local breed cat, Sirius Black. Phoebe loves to play with the cats and sleeps with them. Phoebe and the cats are truly loved by their owner, who is currently pursuing her studies in Pet Grooming." 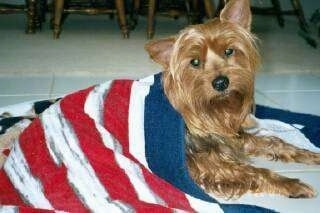 This is Duke and he says, “God Bless America.” 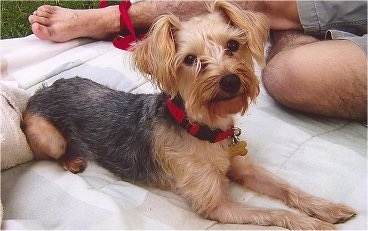 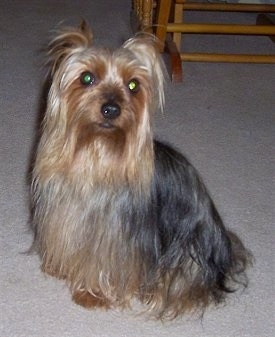