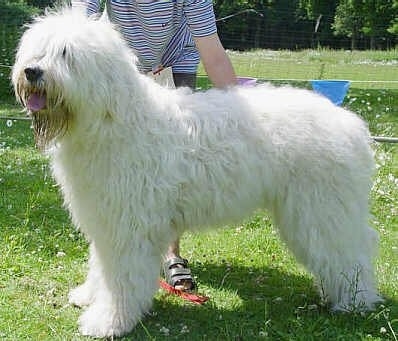 The South Russian Ovtcharka is robust and lean with massive bone structure and strongly developed musculature. The coat is 4-6 inches long (10-15 cm), coarse, thick and dense, and of equal length on the head, chest, legs and tail, with a well-developed undercoat. Coat colors are most often white but also white and yellow, straw color, grayish (ashen gray) and other shades of gray, white lightly marked with gray and gray speckled. The head is an elongated shape with a moderately broad forehead; the occipital crest and the zeugmatic arches are strongly pronounced. The stop is barely visible. The nose is big and black. The ears are relatively small, of triangular shape and hanging. The eyes are oval shape, set horizontally, dark; the eyelids are lean and tight. The teeth are white, big, fitting closely. The incisors are set regularly and close in scissor bite. The neck is lean, muscular, of moderate length, set high. The chest is reasonably broad, slightly flattened and deep. The belly is moderately tucked up. The loin is short, broad and rounded. The withers are apparent but not high. Back is straight and strong. The tail falls at rest, reaching the hock, with the end curved upward. The front legs are straight, parallel and relatively long. The angle formed by the shoulder bone and upper arm bone is about 100 degrees. Pasterns are strong, wide and long, with a slight slant. Hindquarters are powerful, wide set, parallel and well-angulated. The upper thighs are well-muscled. Stifle bones are long and inclined. Hock joint is clean-cut and angular. The hock is strong, long and slightly inclined. The feet are oval shaped, strong, well-arched and covered with long hair.

The Ovtcharka of southern Russia is a very large, robust dog. He adapts easily to diverse climatic conditions and temperatures. This breed needs an owner who knows how to display strong leadership; someone who is firm, confident, and 100% consistent. If you do not show your authority over this flock guard, he may become very dominant with strange people and other dogs. This breed is not very demanding, but he does need a strong-minded human to be his leader. Males are stronger and more massive than females. They were bred to guard their property; therefore, they are independent and will respond negatively to nervous activity. These dogs are strong, balanced and lively. They have a dominant reaction; it is their active way of defense. As guardians they extend themselves to include their families, their home and as much land as they can scent and thus fully call their own. The possessive nature of this dog requires extensive property, a sizable family, and preferably other animals that he can protect. He has a dominating personality and can enforce his will upon other dogs with ease. Socialize well while young. This is not a breed for the inexperienced or meek owner.

The South Russian Ovtcharka is not recommended for apartment life.

This breed needs plenty of exercise to stay in shape. If these dogs are not actively working as flock guardians, they need to be taken on a daily, long brisk walk.

Historians and cynologists have different versions about the SRO breed’s origin. Some believe the SRO is developed from Pra-slavics (arias dogs). They resided at the SROs place of origin at 4 BC and used the original pre-historic bearded (“broudasti” in Russian) dogs as herders and guardians. They were described by L.P Sabaneev as Russian Shepherds or Russian wolf-killers. As the arias moved west and north, and those tribes were named Slavic, the bearded dogs were referred to as Russian Shepherds. Dogs were kept in quantity by Russian aristocracy. This is a Russian Native Breed, completely developed by 1790.

In another version, the SRO originated from European herding dogs of the same hair type known as the Austrian Shepherd. The SRO and European herding dogs of the similar hair type look alike and have the same ancestors. Several herding dogs with long, wooly hair were imported to Russia from Europe. In Russian Imperial Law Books (XXVI volume, 1830) there is mentioned a special breed of dogs imported at 1797 from Spain with merino sheep. Those dogs were used for both herding and protection against predators, highly praised for their abilities. Law books recommended breeding these dogs. Russian scientists specializing at southern steppes before 1797 wrote that local sheep herds are protected by wolf-looking dogs and hounds (believed to be SRO ancestors).

Small Austrian Shepherds were not suitable for Russian steppes. Sizable territory and natural merino sheep's instinct, keeping the herd together, excluded the need for small herding dogs. There only was the great need to protect from predators. So Austrians were crossbred with “tatar” shepherds (similar to Caucasian) and sighthounds, the most common breed in the Crimea area at that time. Offspring selected were large, aggressive and hardy.

Arguments about SRO ancestry are endless. However, there are facts nobody can argue with. SROs definitely have wolf as the direct ancestor. The SRO skull is built almost identical to the wolf’s, with only slight differences, that could be explained by domestication.

“Barak” is an old Turk word. In the well-known “Turk Languages Vocabulary” by Mohammed Kashgarsky (XI century) “barak” is interpreted as “the dog with long, wooly hair, exceptionally fast and agile, the best among hunting dogs.” This description sounds like an SRO. The body and limbs of the South Russian are very similar to the sighthounds’. Speed, swiftness and lightening reaction is inherited from hound ancestors. 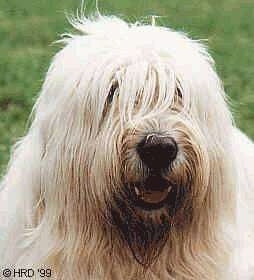 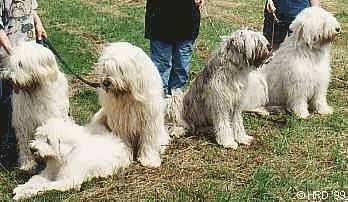 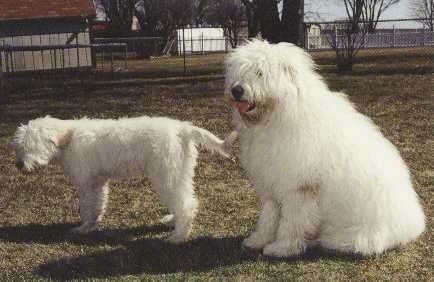 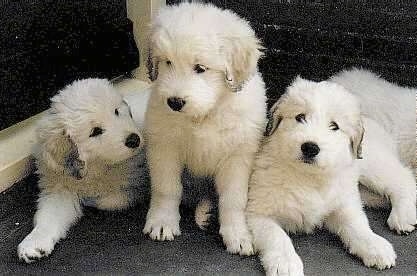