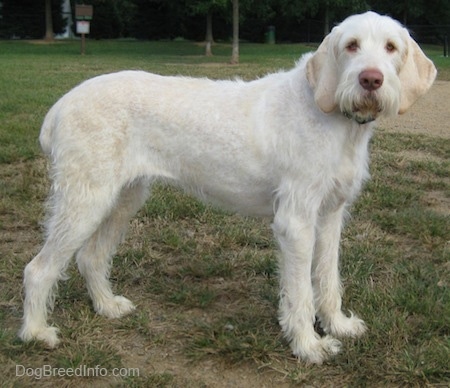 The Spinone Italiano, also known as the Spinone, Italian Spinone or Italian Griffon, is a large, rugged looking dog with a long head. The muzzle is square when viewed from the side and is the same length as the backside of the skull. The stop is very slight. The nose has large, wide open nostrils and is flesh colored in white dogs, darker in white and orange dogs and brown in brown or brown roan dogs. The teeth meet in a scissors or level bite. The ears are triangular in shape and hang. The chest is broad and deep, extending at least to the elbow. The topline slopes slighty from the front of the back to the rump. Dewclaws are sometimes removed. The wiry coat is dense and thick and comes in solid white, white and orange, orange roan with or without orange markings, white with brown markings and brown roan with or without brown markings.

The Spinone has great strength and stamina, suited for hunting in all climates and on all terrains. Extremely intelligent, happy, upbeat and enthusiastic, the Spinone Italiano is a pleasant, easy-going breed. He is easily satisfied when treated as a lower-ranking member of his human pack family. Although serious when at work in the field, he definitely has a clownish side that is often quite entertaining. Never bossy or whiny, unless he does not see humans as pack leader, this gentle soul loves children, those he knows, and those he does not. Children must be taught how to display leadership skills. His great patience should never be taken for granted, for abuse is abuse, whether intentional or not. This breed gets along well with other animals, particularly enjoying the company of another dog. He wants to be with his people, whether that means at home or traveling. He is a quiet breed in general, but may occasionally howl along with a siren. The Spinone is not a protection breed. He is either unlikely to attack under any circumstance or would only do so if he or his family is directly threatened. He learns fast. If the dog does not see humans as ranking over him in the pack order, he can become stubborn. An intelligent hunter, the Spinone is aware of the difference between a real hunt and an exercise. For example, one breeder mentioned that his dog is perfectly willing to pick up downed birds, but he is reluctant to retrieve a training dummy. Nor does the breed perform in flashy style; instead being a slow, steady worker on the hunt or in the ring. Sadly, many judges penalize this, expecting all dogs to work like a pointer (field) or a Border Collie (ring). The Spinone can be timid if not properly socialized. It responds well to motivational training. The coat protects it from the water and freezing temperatures of the swamp, casually going into cold, deep water. It is an excellent swimmer and a model retriever.

Little data has been accumulated for the Spinone breed in general. Hip dysplasia does exist, as in other comparably sized dogs. Sometimes bloating does occur, though it is not a huge problem. Some are prone to an inherited disease, which manifests itself as a Cerebellar Ataxia, or abnormal gait originating from a problem in a part of the brain. For more information, go to the Spinone Club of America.

Content within a fenced yard, this large dog is nevertheless capable of jumping very high. The occasional one is a tunneler. Talk to breeders about secure fencing.

Their activity level is low to medium indoors and medium to high outdoors. A good breed to jog with, the Spinone Italiano is not a "racy" type dog, moving more slowly and methodically than many other gun dog breeds. As such, he can do well with a small yard combined with daily walks and play.

This breed requires just a small amount of stripping—pulling dead hair—as opposed to cutting, to neaten the coat. Other than that, just a weekly brushing will suffice. Bathe as necessary. Some say this breed grooms himself like a cat.

Although not common in the U.S., this breed has a long history of service to man. The breed is known as Italy's all-purpose hunting dog. Some say it is a cross between White Mastiff, French Griffon and the coarse-haired Italian Setter, bred with the dogs that were left by Greek traders and others from the Adriatic coast. However this is not proven and the dog's rather uncertain heritage centers around Europe and its gun dogs of long ago. Whether he was the basis for bringing forth other gun breeds, or whether they simply sprang from common stock is not known. Like all Italian breeds it is ancient. In Renaissance Italy a pointer with wiry hair was already present. After 1950 the breed was reconstructed by a few great breeders. The dogs have a great sense of smell, setting, retrieving, recovering, and very close ties with the hunter. The breed has excelled as a pointer and retriever for centuries. Today he is still a popular hunting dog in other countries, as well as a pet. The AKC recognized the Spinone Italiano in 2000. 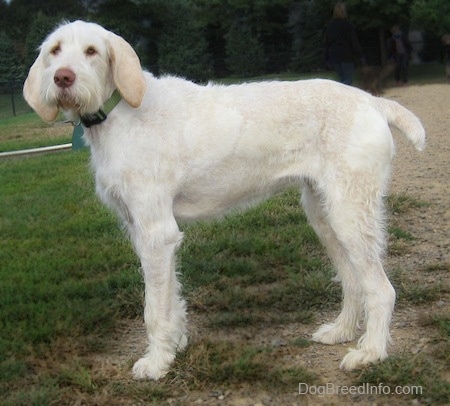 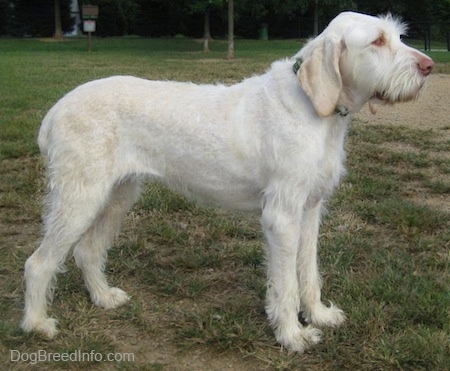 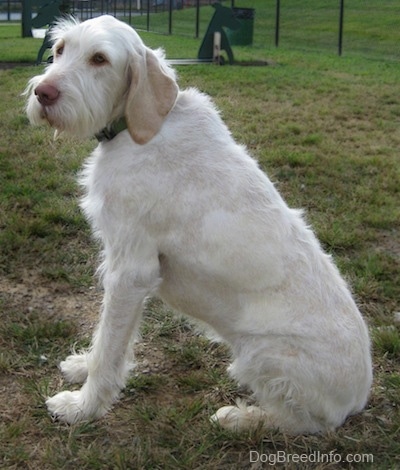 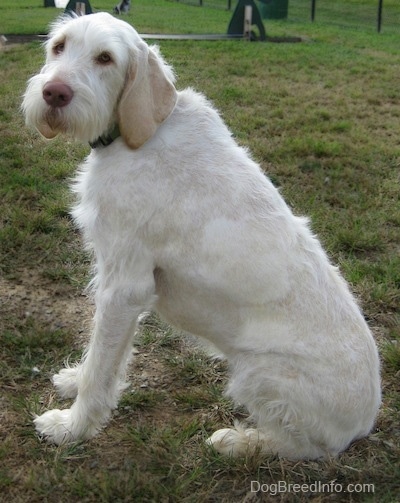 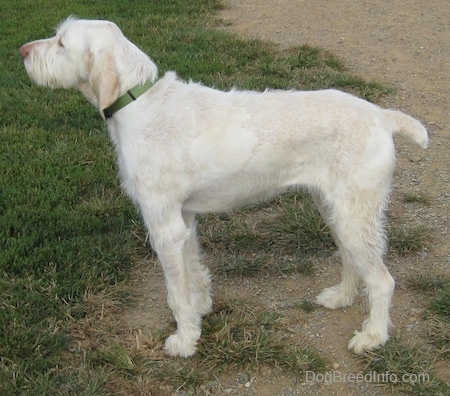 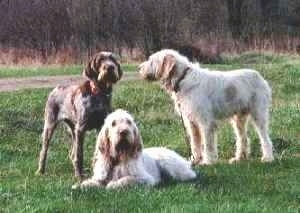 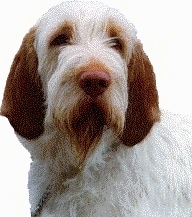 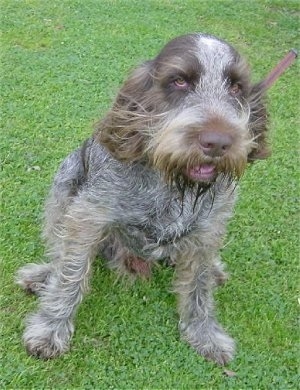 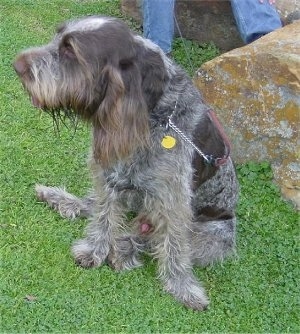 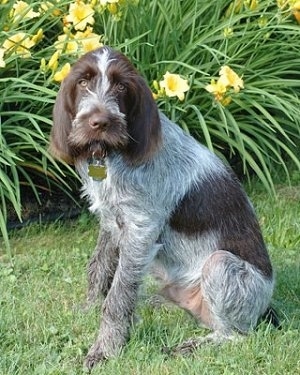 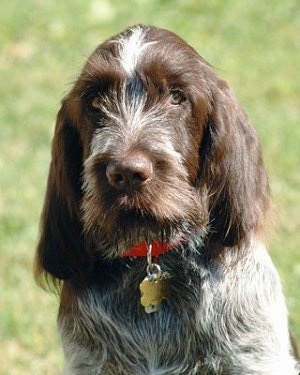