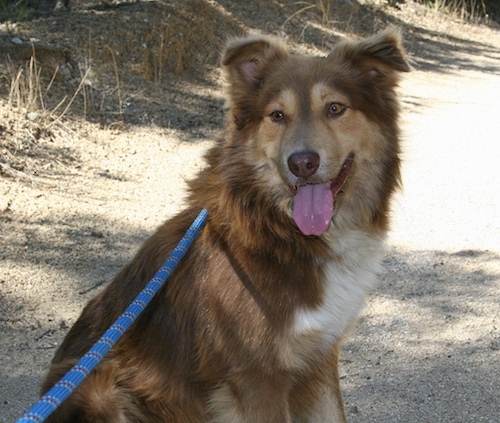 ALIF (VOBROUK) DE LA BAUME CROMAGNON—9. September 2004 – 4. Mai 2010—Aidi Atlas Mountain dog Moroccan Lifestock Guard dog—"I named him Alif: Companion and a friend, he was: for Ullal and for me. Alif was such a good dog. We miss him... I took Alif to my home 15th of January 2005 when he was 10 months old. Right from the beginning it seemed that he had chosen me. Eight months later I came to know that in his first home the puppy was severely beaten... on the crane! Than the bouts began in time lags of some months. Starting with 2010, they increased to at last almost every day. He was suffering from SOA=Sudden Onset Aggression commonly known as Rage Syndrome. Finally, in the night of the 3rd of May, Alif fell into a coma and I had to put him down in the morning of 4th May."

The Aidi is lean and muscular. It has a heavy plumed tail and medium-sized ears that are tipped forward. Its jaws are strong with tight black or brown lips. The eyes are medium with a dark color and dark rims. The Aidi has a tapered muzzle with a black or brown nose that usually matches the coat. The coat of the Aidi is course, thick and weather resistant. Coat colors include black, white, black and white, tawny and pale red.

Energetic and highly protective, the Aidi is a flock guard, used to protect herds of sheep and goats. It also makes a good hunting and scent dog, which is typical of a mountain dog. It is powerful, agile, alert and ready for action. It makes a very good guard and watchdog, however, is not a breed for everyone. It needs an owner who knows how to remain alpha, and it needs a job to do, preferably as a flock guard. As a sensitive breed, the dog should receive kind yet firm training.

Aidi are not recommended for apartment life. They are relatively inactive indoors and do best with a minimum of a 1/4 acre and at least a 5' tall fence. They should live in a semi-rural or rural setting. This breed is quiet and clean in the house.

The Aidi should be taken for long daily walks.

The Aidi is recognized as coming from Morocco, where it was used to defend its owner and property from wild animals. It probably originated in the Sahara. The dog has never worked as a sheepdog even though the 1963 standard was published under the name Atlas Sheepdog; this was corrected in 1969.