Protecting Your Puppy from Dog Attacks 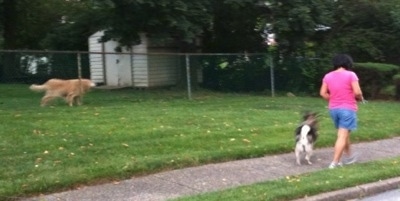 As you continue to use the walk to drain your dog’s energy and help you grow into the role of pack leader, there may come a time when your dog is attacked by an off-leash dog. As you become your dog’s pack leader, it will become dependent on you to not only set the rules, boundaries, and limitations governing its behavior but also to protect it from attacks such as this. This is what pack leaders do. It is a 24/7 job and you do not receive holiday pay.

Many dog owners have stopped walking their dogs because of a dog attack and what used to be a well-balanced dog now has developed a behavioral issue. It is not uncommon for the owner to also be traumatized and afraid to take Fluffy out for a walk. This creates an unhealthy situation as Fluffy is going to pick up on the fearful energy that is projected every time an owner remembers the attack with even an inkling of fear. All the work that was put into rehabilitating Fluffy may have disappeared in an instant due to this incident.

Fortunately Fluffy has the ability to move past this attack very quickly IF the owner provides the proper leadership. The quintessential factor in Fluffy’s re-rehab is going to be (once again) how the owner reacts to the situation. Continuing to walk Fluffy and providing her with strong leadership will be critical. It is even more important now than previously. The owner must move beyond the emotions involved with the attack as fear and pity for Fluffy will not help her recover. Continued exercise, strong leadership, and lots of affection, when appropriate of course, are what will help her recover.

This is what being a true pack leader is all about: helping a pack member overcome all obstacles in order to stay balanced. The most important (and difficult) thing for the owner to do is to separate the emotions associated with the memory from the memory itself. The emotions need to be locked away into the “Pandora’s Box” that exists in our subconscious and these emotions must not be allowed to come out when Fluffy is around.

Re-socialization to a calm submissive pack will also be instrumental in getting Fluffy to overcome this trauma. Suggestion: look to local rescue groups to find a calm, submissive pack at one of their foster homes. You may be able to utilize them in re-establishing to Fluffy that not all the other dogs want to eat her.

Looking back and analyzing the attack may help in preventing a reoccurrence of the event. Of course, every dog attack is different, but most probably follow a pattern similar to this:

You’re taking Fluffy on her nightly walk when a stray 90-pound dog comes running down Mr. Jones’s driveway with fire in its eyes, snarling and growling, looking to kill anything it can. You probably underwent the initial shock brought on by the surprise of the event and may have felt the surge of fear that most people would in this situation. Without specific training, most dog owners are ill equipped to fight with any size of aggressive dog, small or large. Our subconscious knows this and most humans’ initial reaction when faced with a dangerous situation is to show fear. An attacking dog will sense this fear and push its advantage. That you felt fear is not important, how you react to it is.

Following are some suggestions that may help defend your puppy during a dog attack:

Your very best option is to walk carrying some sort of stick at least two-feet long and one-inch in diameter. A walking stick, cane, wooden dowel, PVC pipe, or even a twirler’s baton will work just fine. If attacked, point the stick at the dog’s nose and keep it there. Make the stick the obstacle the dog must overcome in order to advance.

If the dog stops its advance, you have thwarted the initial attack. While still pointing your stick at the dog, take a small step towards it. If the dog backs up, take another step. You are now taking its territory from it. Repeat as often as necessary until the dog retreats. This sounds fine until you meet a dog that doesn’t back down.

If the dog does not back down, keep pointing the stick at it. The stick must be used as a joust, not a club. If you swing the stick and miss, you leave yourself open for a counterattack. The goal is to have the dog grab the stick so that its mouth is occupied. When it grabs the stick, it will instinctively pull.

Pay attention—here’s the part a lot of people don’t know: When the dog pulls on the stick, DO NOT PULL BACK!! It is much stronger than we are and has a lower center of gravity. Pulling back plays to its strength and you will not win this tug-of-war. Additionally, if the dog releases its bite on the stick while you are pulling (probably with all your strength) you may stumble backwards and while trying to recover your balance the dog will be free to attack again.

The better move is when the dog grabs the stick, wait for it to pull and at that moment take a small step into the dog. This will push the stick into the dog's mouth. The dog can easily be injured by this action, so please be as gentle as possible. The idea is to defeat it, not kill it. You need to be focused on keeping the stick in the dog’s mouth, rendering it useless for biting anything else. Again, you do not want to push so hard as to injure the dog, but you do want to create enough of a negative experience so as to make the dog retreat and (hopefully) cause it to possibly not attack other dogs.

If it does not grab the stick and does not back away, begin poking the dog with the stick. It will soon grow tired of being jabbed and retreat.

Hope this helps protect your puppy from dog attacks.

Written by Robert Wood, another Cesar Millan convert working out of the Dallas, TX area as a dog rehabilitator and people trainer.