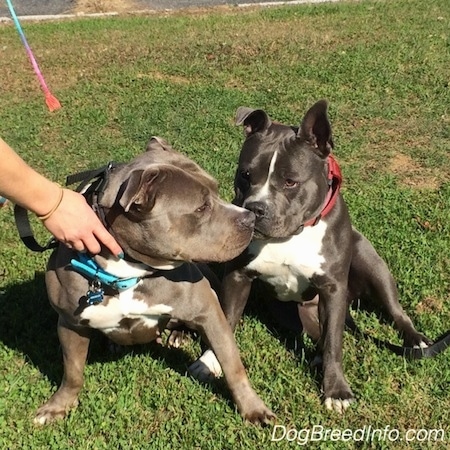 By nature, dogs are not fight seekers. If left in the wild to fend for themselves, packs of dogs would rarely participate in a pack to pack fight.

Dog fights generally happen when one or both dogs are off balance, under exercised and/or unsocialized, not having their instincts met. Also when one or both dogs take over as alpha dog in their human pack. Dogs being alpha over humans is very frustrating for a dog as the dog cannot totally control the humans. It's not always the unstable dog who starts the fight. Sometimes a dog who is balanced may try to correct one who is not. Since dogs live with humans, it is up to the humans to satisfy the canine's natural instincts. The more balanced the dogs are the better chance you have of the dogs getting along with one another.

Often times when people want to introduce two dogs they simply walk the dogs up to one another putting them nose to nose and hope for the best. Or they unsnap the leashes and let the dogs greet one another. Dogs off leash have a higher chance of getting along, because tension on a leash can actually cause a fight. But on the other hand if things should not go so well, having the dogs leashed helps the humans separate the dogs. These methods can work, but sometimes they do not. Sometimes the owners are unsure if their dogs will get along. If the dogs begin to bark and/or growl when they see one another it is often assumed that means there is no hope of the dogs getting along, but there is always hope if the humans do things correctly. So what do you do when you are unsure, or you know your dog is known to fight with other dogs? Or if you just want to be sure everything will go well? This page explains the best method for bonding one dog to another creating a pack relationship. 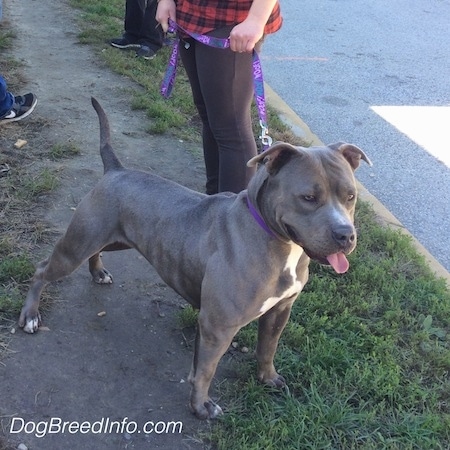 Meet Princess Leia the blue nose American Pit Bull Terrier who was rescued from a high kill shelter. Leia is believed to be about 2 years old. The shelter said Leia was iffy with other dogs. She likes to try and dominate other females. 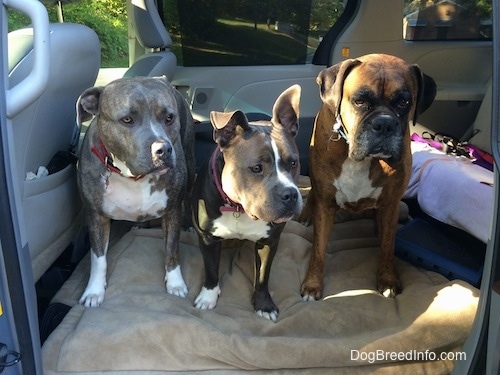 Amie, who adopted Leia, wants her dog to be able to go on road trips with my pack, Spencer the American Pit Bull Terrier, Mia the American Bully Pit and Bruno the Boxer. A proper introduction is going to be very important.

The first day we did not allow the pack to meet. Amie needed to work with Leia, teaching her some basic manners. This is Leia when she first walked out of the shelter. She was very unruly with a ton of pent up energy and no manners.

On the way home we stopped at a park to see if Leia had to pee. She was in a very dominant state of mind. Her tail was up and rigid and she was walking very high and proud. Putting a dog in this state of mind nose to nose with other unfamiliar dogs runs the risk of a very high failure rate. 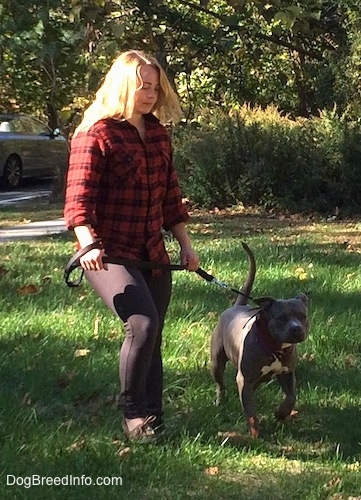 Leia was not used to having a leader or having rules to follow. 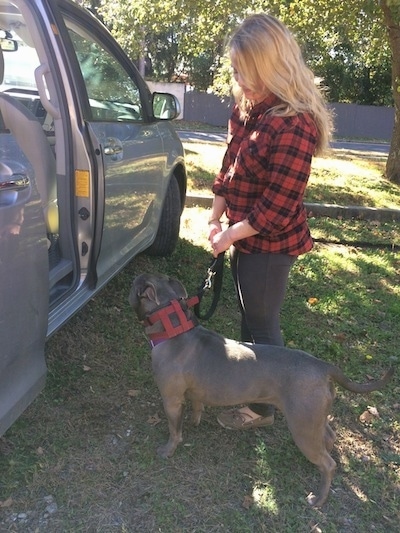 As Amie approached the van, Leia rushed forward and tried to bolt inside. Amie stopped and didn't allow her to jump in. Leia did a few alligator rolls in protest, standing up on her back legs and spinning in circles. She wanted in the van and she was not used to having someone ask her to wait. Amie calmly stood in front of the van allowing her to get it out of her system. Then she turned and walked Leia away from the open van door. Leia was not allowed to jump into the van until she stood calm and waited patiently. Amie walked her back and forth from across the parking lot to the open door until Leia stopped trying to bolt. As soon as she approached the van in a calm manner without trying to jump in Amie gave her a command to get into the van. Notice how Leia's tail dropped to a mid level relaxed range as Amie asked her to watch for commands rather than do as she pleased. 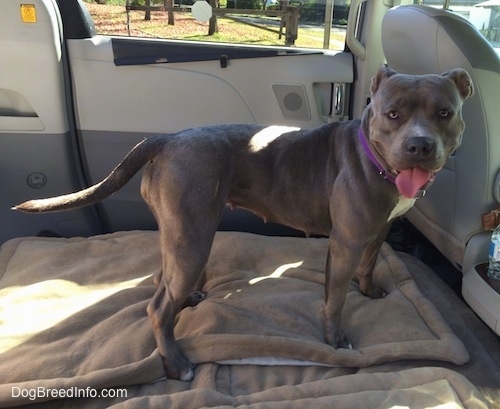 This is Leia after the short 10 minute lesson on manners. Amie asked her to heel on a leash and to wait for a command to get in the van and already Leia's attitude began to change. Check out her body language. Her tail is relaxed, her mouth parted with her tongue out and her ears back. She rather likes having a leader.

Leia still had a lot to learn. Don't jump on humans, don't jump up at counters, stay off the couch, don't pull on the leash, wait for a command before jumping in or out of the car, don't bolt through doorways, follow me, don't lead me, watch for direction, do not try and give it. In just a few hours with Amie, Leia already seemed like a totally different dog than the one she picked up at the kill shelter. Amie did not use food, knowing that food should not be used on a dog who is in a dominant state of mind. She also knew that silence is golden. She used more body language and less words mocking the way one dog communicates with another. The more balanced Leia is the higher her chances will be of getting along with other dogs.

After Amie worked with Leia for a day to teach her some basic manners, we decided to introduce the dogs by pack walking her with one dog at a time. We chose Mia as the first dog to meet. Mia is an alpha female. The type of dog the shelter said that Leia will try and dominate. 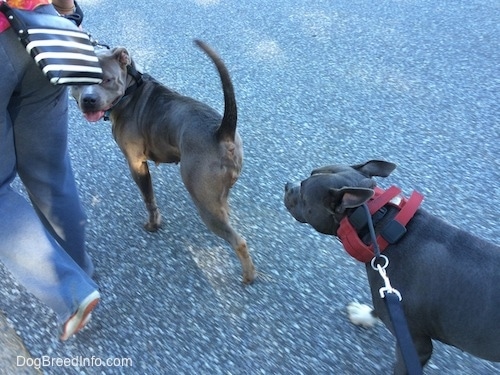 At first Leia was very dominant towards Mia. Her tail went up at the sight of her and she did a few protesting alligator rolls trying to get closer, but Amie kept walking and didn't allow Leia to decide when it was time to approach. At first Mia was overly excited and needed a few corrections to remind her to calm down. Even through Mia's excitement her tail was hanging down mid range. Her body language was submissive. Mia was not intimidated, but she did not want to fight. Once Mia calmed down we allowed her to smell Leia's back end. As Mia approaches Leia turns and looks behind her. Amie keeps her moving forward. 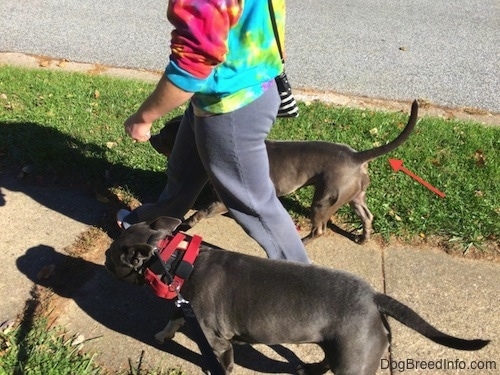 We just kept walking making both dogs heel, not letting the dogs pull or sniff all around as they pleased. As we walked Leia's tail started dropping. This picture shows it lower, but not yet relaxed. 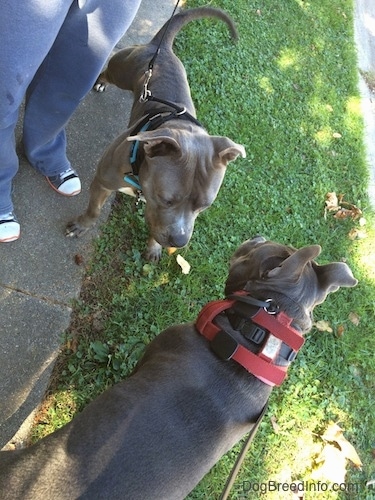 At one point we stopped to pick up some dog poop and we allowed the dogs to smell one another. Leia puffed herself out raising her head and tail as she leaned towards Mia. Leia was silently challenging her. Mia took two steps backwards. Nope, Mia did not want to fight. Our family works hard at keeping Mia balanced and we had that on our side. Amie and I were careful not to do any sudden corrections that could trigger a fight because we could sense that Leia was in a state where that could happen easily. It was time to keep walking. The dogs were not quite bonded. 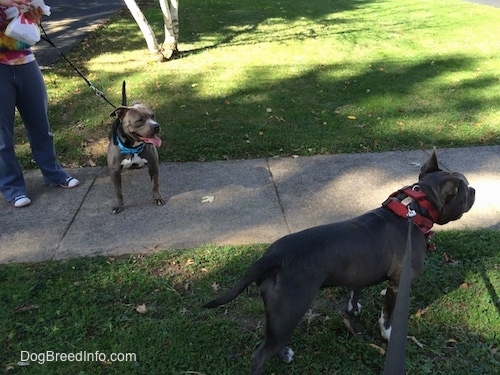 Notice the tail position between the two dogs. Mia is relaxed and hanging low, while Leia's is up and ridged. The difference is, Mia grew up with leadership and clear rules and Leia did not. 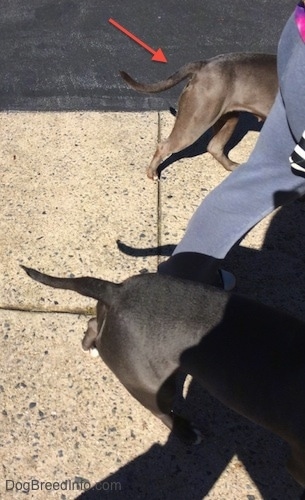 But after 10 more minutes of Leia being asked to heel on the leash she relaxed. Notice her tail is mid-level. We began to move closer to one another. We kept the dogs moving. It was at this point that we allowed Leia to smell Mia's back end. We were now walking with both dogs paying no mind to one another. 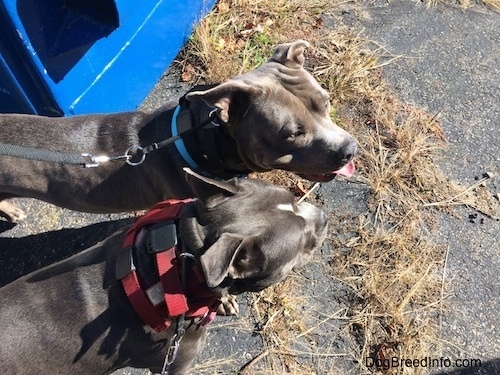 By the time we were finished the dogs could calmly stand next to one another. 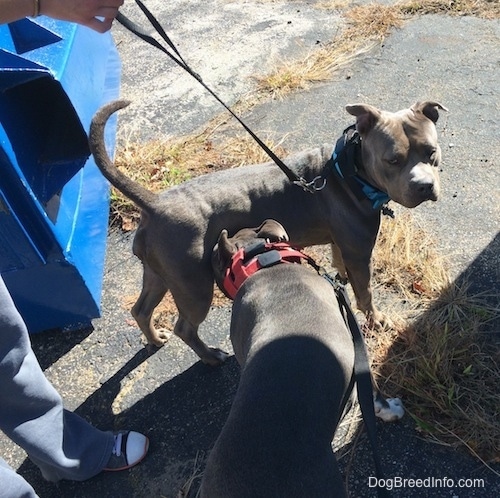 When Mia started to smell Leia, Leia's tail started going back up. 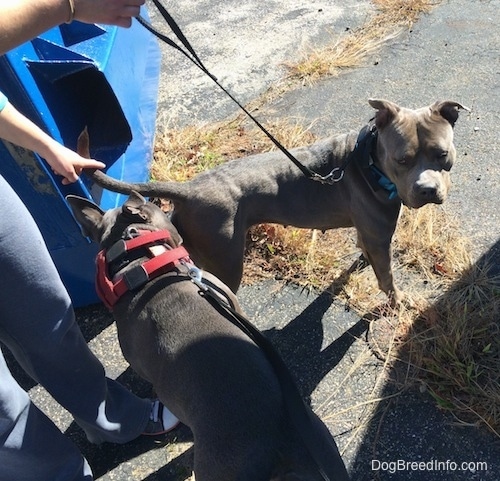 Amie gently, and silently lowered her tail back down. Lowering a dog's tail can actually change their state of mind. It is like when you are in a bad mood and you decide to smile. It starts making you feel better whether you mean to feel better or not. 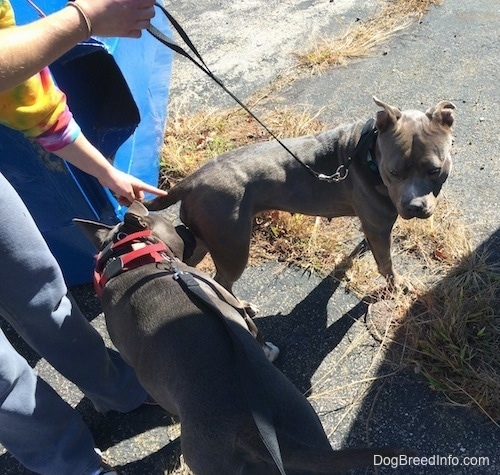 She held it down with one finger. 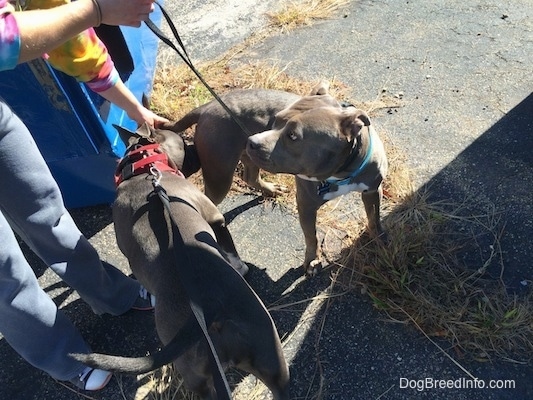 Leia turned and looked at Amie. After only one day Leia already saw her as her leader and she was trying to please her. Leia's body began to relax. 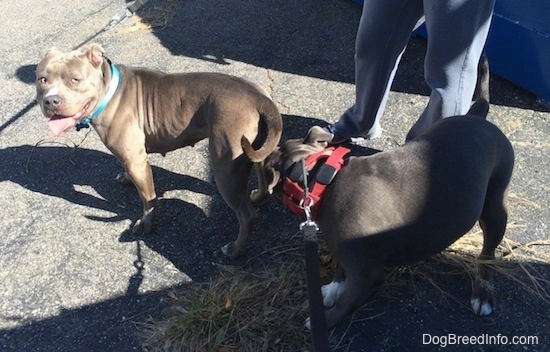 That's much better Leia. Leia is now standing very submissively allowing Mia to smell her. Her tail is low, her mouth is parted with her tongue hanging out and her ears are back. She is no longer trying to puff herself out. 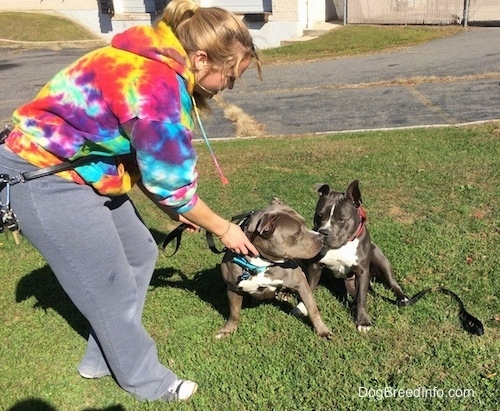 We tried to get a picture of the two pits sitting side by side, however it proved to be difficult as Leia was never taught what the command "sit" meant let alone "stay". She is going to need some basic training. Her manners have come a long way in only one day of living with Amie. She is a very sweet, loving dog with humans. The shelter had said she was an alpha female, but she is actually a middle of the road dog who had a ton of pent up energy with no leadership. She was not taught basic commands or manners. In one day Amie had her heeling on a leash, pausing at doors rather than bolting on ahead, not jumping up at the counter or on humans and walking by other dogs without reacting (at a pet store). Leia started watching Amie for direction rather than acting unruly and doing as she pleased when she pleased. I am excited to see how Leia will be in a week, month and in a year.

We plan on introducing Leia to Spencer the American Pit Bull Terrier and Bruno the Boxer the same way we introduced her to Mia. The processed will be delayed by Leia's scheduled Spay as she will need time to recover. Bruno the Boxer is good with other dogs, but he does not care for dogs who are dominate and unbalanced. The more Amie satisfies Leia's instincts along with teaching her basic manners and giving her a leader to follow, the better our chances are that Bruno will accept her. 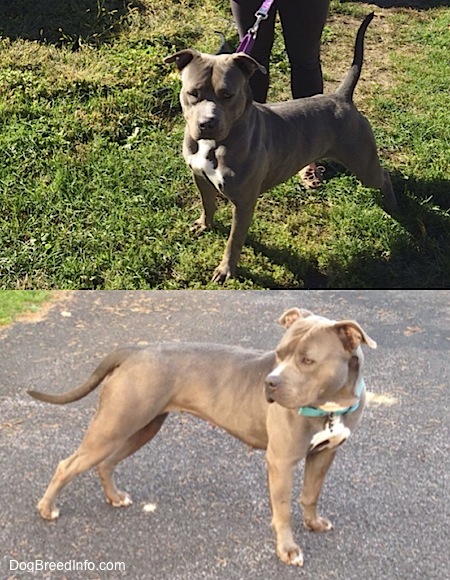 Two week transformation. Above Leia the day she came home from the high kill shelter and below after 2 weeks of rehabilitation. From a dominant state of mind, pulling unruly on a leash, alligator rolling in protest (standing on back legs twisting) tail up, trying to dominate other dogs and lunging at cats to a calm respectful dog who heels on a leash, watches for commands, ignores passing dogs and let's cats rub all over her.