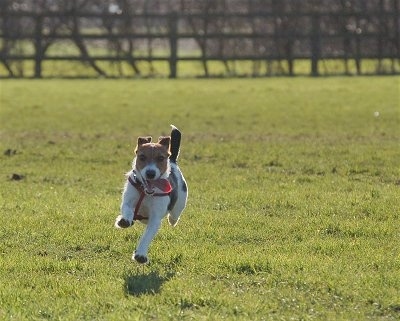 When I call my dog he thinks I am playing a game and runs away from me. I have to chase him to try to get him back. How can I stop this behavior?

Caution: in some dog breeds it is an instinct to run off and chase things, and it is not recommended to ever let them off a lead in an unsafe area. Know your breed and know your dog. If you are not 100% confident that your dog will come to you when called, and not run off, do not let him off his lead. Until you get him to start listening, do not let him off his lead in an area where he can get to cars. If he will not come and thinks it’s a game, then he will eventually get hit by a car.

One of the biggest no-no's is to reprimand a dog that has run off and finally come back, or when you have finally caught him. Doing this is teaching your dog quite the opposite. It's teaching him NOT to come back. Dogs are all about the moment, and whatever they are doing at the moment you punish them is what they relate as being the crime. In this case, they will think it's coming back! What dog in its right mind would come back knowing it’s going to get in trouble? As angry as you may feel towards your dog when you finally catch him, you cannot punish him. It's too late. A dog needs to be corrected at the moment the bad behavior is being performed. They do not have the mindset to reason with the logic of not running away to prevent the punishment. To a dog, it's all about the moment. Also keep in mind that your dog can feel your emotions. So, if you are angry, he will feel it. He won't know WHY you are angry, he may even think it is because he came back to you. Take deep breaths and try to calm yourself. Instead, think strong and confident. Stand tall, lean forward. You will have a better chance of your dog taking you seriously and submitting to your wishes.

The number one thing you can do to help with the running away issue is to start being your dog's true pack leader. If your dog runs away from you, there is a very good chance he does not see you as his leader. He is seeing himself as "alpha" in the relationship. Begin setting up and consistently enforcing rules he must follow, putting limits to what he is and is not allowed to do. Take him for daily pack walks to release mental and physical energy. Be sure to treat him like a canine, not as a human. Take time to learn how a dog communicates. If your dog does not respect you as his pack leader, holding a higher ranking spot in the alpha order, he will only come to you when HE wishes.

Teaching to Come is Rewarding

To work with him, be sure he knows the simple commands of sit, stay and come.

Practice this in a safe area, for example, inside your home or your backyard. Do not chase him anymore; when you do, you are rewarding his bad behavior because he loves the game. In a safe area, get some doggie treats and practice sit, stay and come. Do this several times a day, but do not do it for long periods of time. It's better to do this more often for short bits during the day. Show him you have a treat, call him over, tell him to “sit” then “stay” while you back up, and then “come.” Then praise him and move on to whatever you were doing and ignore him for a while and go back and do it again later. He is learning that coming to you can be a good thing. Do not chase him. If he does not come, he does not get the treat. Make sure he sees the treat. Remember, chasing is a reward because he enjoys it. 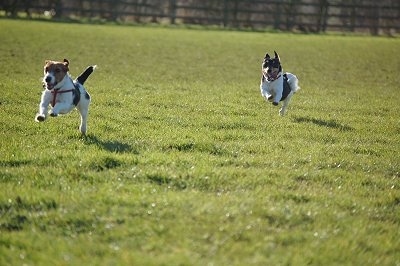 Next Step: Go out in the yard (FENCED-IN) or a safe area. Have some doggie treats in your pocket and sit on the ground and call him to you. Just sit there and play with his toy (bring one and have it in your pocket) and some treats and call him to you without chasing him. When he comes, praise him, pet him, and rub his back. You can also reward with a play session after you have pet him and told him what a good dog he is. Other times tell him he's a good dog and end the training session sooner. When he starts coming to you while you are sitting on the ground and calling him, stand up and do the same. Call him over for a treat while outside in the yard. When he comes, reward him with praise and sometimes a treat, but not always a treat, as you will not always have treats on you when you are out and want him to come. You can start off with treats, but start mixing praise and play in as rewards. This will need to be done over weeks and the sessions should be short and more often. You do not want to do this for long periods of time. For example, you can do this several times a day, but don’t do it for two hours straight. Dogs do better with lots of short sessions rather than one big long one. Ten one-minute sessions are much better than one hour-long session.

Keep doing this inside your home too. Have a treat in your pocket and call him over. If he comes, hand him the treat and pet him, then move on to whatever else you were doing. Don't chase him; chasing is a reward because he enjoys the game. Until he is trained to the point where you feel confident that he comes to you, do not let him off his lead in an unsafe area. 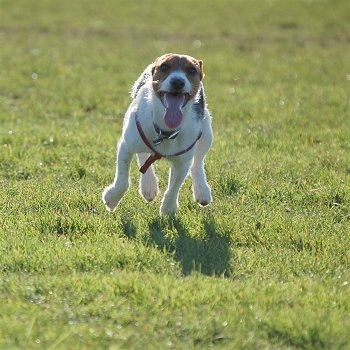