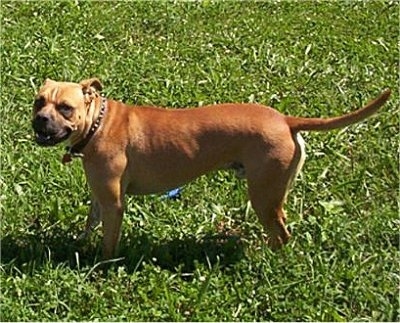 The Banter Bulldogge should be a powerfully built, athletic, muscular mid-sized Bulldogge / Mastiff with minimal white. A strong working dog with a bully build, its legs still underneath it, they range from 50 to 85 lbs. in keeping with the range that the Brabanter Bullenbeisser was believed to be when it was still around. Banter Bulldogges have a slight under-bite and are mostly solid in color. They compare to the old Molosser dogs of the area of Brabant that were known as the Brabanter Bullenbeisser. Most of all, they continue to be a working breed and should be proven at every opportunity. The head is square and muscular, and should have a pronounced stop between skull and muzzle, with the top of the skull mostly flat with strong muscular jaws. Fault: narrow or long. It has cood strong teeth with impressive canines. The muzzle should not be upturned, therefore allowing un-restrained breathing. Fault: muzzle too long, scissor or even bite. The eyes are rounded and almond-shaped, wide-set with a wrinkled brow for a look of heavy concentration; any color is acceptable. The nose is balanced to muzzle, clean and free breathing; black or dark red. Fault: completely pink nose (a small amount is acceptable). The neck is well-muscled thick and high, blending into very muscular, strong forelimbs. It has an impressive strong chest that should come down to meet that elbows. It should appear square and not overly exaggerated. Chest should have spring to it to allow for heavy intake of air. Fault: too narrow in the chest. The back should have a slight arch with a high-set tail. It should be well-muscled above shoulders. Legs should not be "stubby" or "lanky" but have a nice balance of height compared to the length of the body to keep "performance" in this breed. Front legs are muscular and well defined. Rear legs are very muscular for strong bouncing leaps and superior pulling power. The leg is slightly shorter than body is long. Rear should appear to be very square. Fault: Bowing or turning out, resulting in poor movement. The feet should be compact, round and the pasterns should be strong. Fault: down in the pasterns or splayed feet. Colors include fawn, black, red, brindle of all types, with or without black mask. All colors can possess various amounts of white up to 30%. The coat should be short and smooth. Ears are short, either drop or rose. Ears may be cropped; this is of no major importance. The tail should be set high, naturally reaching near the hock. Preferred to be docked, but this is of no major importance.

Easy to train and very obedient. The Banter Bulldogge should be excellent with children and always loyal to its family. It is a good watchdog and will bark to alarm of danger or to scare off trespassers. Always ready to protect if necessary. It has a lower energy level indoors than out, however Banter Bulldogges do need to get a good daily workout or its energy can become built up. It is a ruff-and-tuff dog while playing and is fine with other dogs as long as it has been properly socialized. A fun dog with its family, always eager for play time and smart enough to know when play time is over. Owners should display a natural authority over the dog, calm, but firm, confident and consistent. Problems will arise if you allow this dog to believe he is alpha over humans. Learn canine instincts and treat the dog accordingly.

The Banter Bulldogge will do okay in an apartment if it is sufficiently exercised. They are fairly active indoors and do best with at least an average-sized yard.

Banter Bulldogges need daily work or exercise, as well as a long brisk, daily walk. They also enjoy fetching a ball or other sessions of play. Makes a good jogging companion.

The close, smooth coat of the Banter Bulldogge is easy to groom. Occasionally comb and brush the coat to remove dead hairs. Bathe only when necessary, for it removes the natural oils from the skin. The ears should be checked regularly and kept clean. The Banter Bulldogge is an average shedder.

The Banter Bulldogge was developed by Mr. Todd Tripp of southeast Ohio in the late 1990s. Mr. Tripp’s vision was to re-create the Brabanter Bullenbeisser of the 1700s that was found in the central Belgium province known as Brabant. A strong working dog with a bully build, its legs still underneath it, the Banter Bulldogges range from 50-85 lbs. with a slight under-bite and mostly solid in color with a minimal amount of white. His foundation consisted or dogs that were a combination of Boxer and various other working bull breeds. Most important of all was the regularity of using a percentage of Boxer in the foundation brood stock. Mr. Tripp was very discriminate in the choosing of dogs to form the foundation of his Banter Bulldogge breeding program. A great deal of research, thought and selective breeding was involved before he reached his final goal. The Brabanter Bullenbeisser was the small Bullenbeisser that was found as a family and working dog in the 1700s and early 1800s. The Brabanter Bullenbeisser was the smaller, more bully type of mastiff that was used to create the modern day Boxer in conjunction with other larger Bavarian mastiffs and the obvious infusion of the "Old Time English Bulldogges." It is also widely known that the Brabanter carried very little, if any, white until the 1830s, when the first English type Bulldogge was first imported into Germany. They are used for weight pulling, working, hunting, guard and companion dogs. 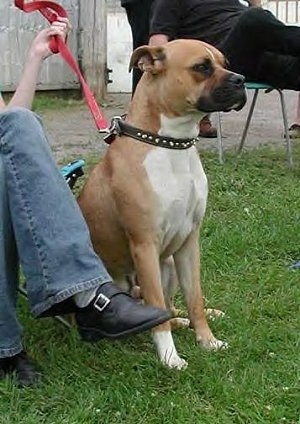 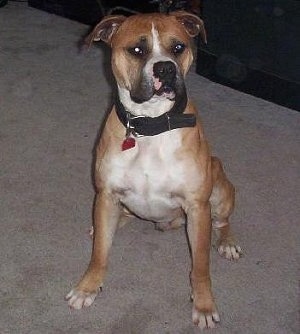 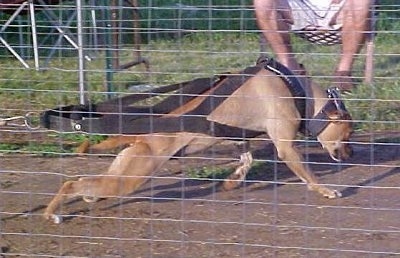