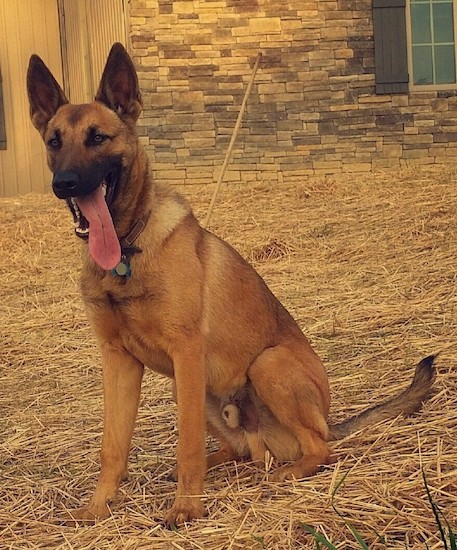 The Belgian Malinois has a body that is often described as square, as that is the shape it appears to have when the legs and topline are viewed from the side. The chest is deep. The topline is level, sloping slightly at the withers. The overall size of the head is in proportion to the body. The skull is flat with the width and length being of the same distance. The muzzle is somewhat pointed and equal in length to the top of the skull with a moderate stop. The nose is black and so are the tight lips. The teeth meet in a scissors or level bite. The medium sized, almond-shaped eyes are brown. The erect ears are triangular in shape. The tail is strong at the base with the bone reaching to the hock. The feet are cat-like in shape. Dewclaws may be removed. The weather resistant, double-coat is short and straight. The coat color comes in rich fawn to red to mahogany to black, with black tips on the hairs. The mask and ears are black. Underneath the body, the tail and back end are a lighter fawn. The hair around the neck looks like a collar, as it is slightly longer.

The Belgian Malinois is one of four Belgian sheepdogs. A very bright and obedient dog, it is determined and observant with strong protective and territorial instincts. Socialize well to prevent it from becoming shy or sensitive. The Belgian Malinois needs an experienced master who is firm, but not heavy handed. If you are harsh or overbearing it will become uncooperative. Owners need to display a confident, natural authority over the dog. Consistent rules must be set and made clear. This breed is instinctively protective so it should be trained and socialized very well from an early age. Puppies should be socialized right from birth. Good for working and competition obedience, these dogs make excellent police and guard dogs. This type of work is currently their main occupation. They do however, make excellent pets if they have owners who can challenge their minds with an air of leadership. They are ever watchful, alert and loyal. The Belgian Malinois is good with children if socialized well with them. This breed needs to be part of the family and not locked up in a kennel. They need leadership, daily exercise along with training and companionship, for without it they may become destructive and hard to handle. The Belgian Malinois is high energy, with a high mental capacity, and is quick to comprehend. It needs a job to do, especially if you are dealing with working lines. Take care when introducing this dog with small non-canine pets. It can be rather dominant toward other dogs and need an owner who can communicate to the dog that dominance is an unwanted behavior. Provided it is correctly socialized with cats and other pets, it should not present any problems. The Belgian Malinois may instinctively display herding behavior such as chasing and circling, moving effortlessly for hours and nipping at people's heels. They must be taught not to do this to people. This is a very demanding dog. It needs an experienced owner for it can easily be difficult to control unless the owner knows how to handle him. The way the owner handles the dog can produce wide differences in temperament and aggressiveness. Talk to someone experienced with the breed before you buy your dog. These dogs are often impressive; don't base your purchase solely on achievement records and appearances. Only adopt this type of dog if you fully understand what it means to be alpha.

This hardy, healthy breed has no major health concerns. Some minor concerns that have been seen are skin allergies, eye problems, excessive shyness, excessive aggressiveness and occasionally hip dysplasia and elbow dysplasia.

The Belgian Malinois will do okay in an apartment if it is sufficiently exercised. It is moderately active indoors and will do best with at least an average-sized yard. This breed prefers cool climates, but adapts well to others. It can live outdoors but would much rather be with his people.

The smooth, shorthaired coat of the Malinois is easy to groom. Brush regularly with a firm bristle brush and bathe only if it is absolutely necessary, as bathing removes the waterproofing of the coat. This breed is a light constant shedder, but sheds heavily twice a year.

The Belgian Malinois was named after the Belgian city of Malines. While the Belgian Malinois is still rare in the USA, it is popular in Belgium, its country of origin. It is one of the four varieties of Belgian sheepdogs, the Belgian Malinois, Belgian Tervuren, Belgian Groenendael, and the less popular Belgian Laekenois, which all share a common foundation. In most countries and breed clubs all four dogs are considered the same breed with different varieties in coat types. All four dogs share a breed standard in all countries except for the AKC, which since 1959 recognizes them as separate breeds and does not recognize one of the four (the Laekenois), whereas the UKC, which is also a U.S. registry does recognize all four varieties as one breed. Versatile and highly intelligent, all four varieties of the Belgian sheepdog excel at a variety of talents, including but not limited to, police work such as, narcotics and bomb detection, protection and Schutzhund, search and rescue, also obedience, agility, tracking, herding, sled and cart pulling and as a guide for the blind and assistant to the disabled. These high energy, extremely intelligent dogs need leadership, to be challenged, and well exercised daily and therefore are not for everyone, but can make an excellent family companion with the right owners. The Belgian Malinois was the first of the four sheepdogs to establish type. Until the other four were established in type they were called "Berger Belge a poil court autre que Malinois," which means "Belgian short-coated Sheepdog who is not the Malinois." Today all four sheepdogs are popular in Belgium, with the Laekenois and Malinois more often used as working type dogs, than the Belgian Groenendael and Tervuren but all types still making excellent workers. 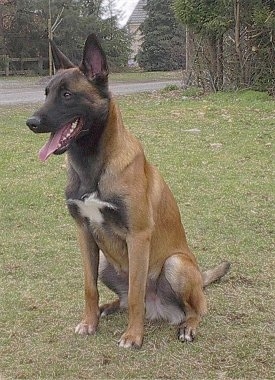 Dante, a one-year-old Belgian Malinios weighing in at 75 pounds (34 kg) was whelped in Belgium. 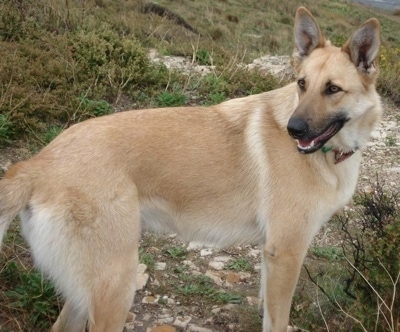 "Adonis is a lovely Belgian Malinois Shepherd. He has been a wonderful companion to my husband and me, and now also to our almost 2-year-old daughter. I did a lot of reading before I picked him up as a puppy (at 6 weeks old), to prepare for raising a German Shepherd—at least that was the plan until I found Adonis. I work in a behavioural intervention capacity, and was very prepared to be consistent and teach with a firm but kind hand. Adonis was a very quick learner, but a very anxious dog. He loved to please me more so than work for food. Overcoming his fear of almost every new thing has been a continuous challenge, but we get past each new fear with firm and consistent guidance. We went to obedience school, but found it too remedial and slow for both of us. We discontinued, but kept working at home. Adonis has great self-control and his ‘tricks’ entertain adults and children alike. Adonis is great with other animals as long as he is properly introduced. He is enthusiastic, talkative, and protective. He is a fantastic guard dog, and is most alert when my husband (the Alpha) is not home. Although I trained Adonis, he now behaves best for my husband when out walking. He loves long walks, can be let off the leash and still be under great voice control. We use a combination of voice and hand commands. Adonis is great at playing hide-and-seek, catching and chasing balls, and swimming. Adonis is the dog I always wanted as a child, but couldn’t have. Owning a dog as an adult has been more rewarding than I could have imagined. Knowing how to teach your dog and be an effective pack leader really enhances the K9 – human relationship." 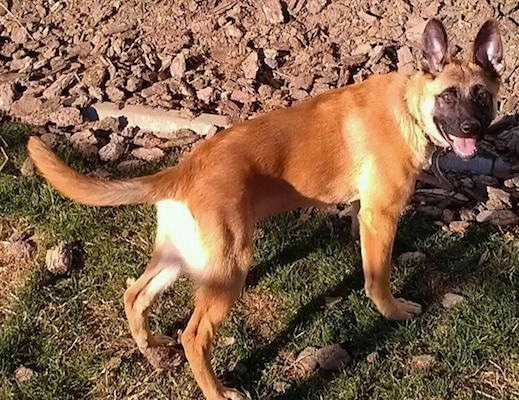 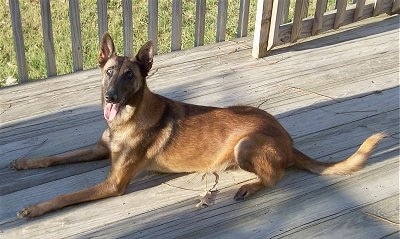 This is Katie, a 5-year-old Belgian Malinois. She was her owner’s partner for 2 years in the U.S. Coast Guard. She is now retired and living the laid back life in her owner’s backyard. 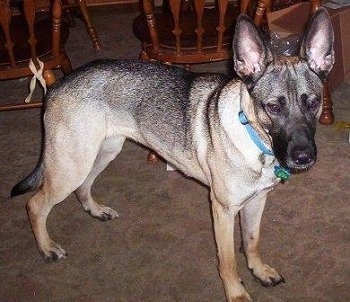 Clara the Belgian Malinois is a beautiful dog who was rescued by the local Humane Society. She loves people, playing with other dogs and cats. 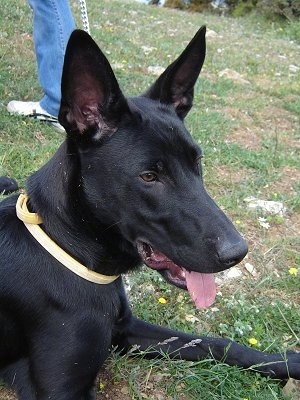 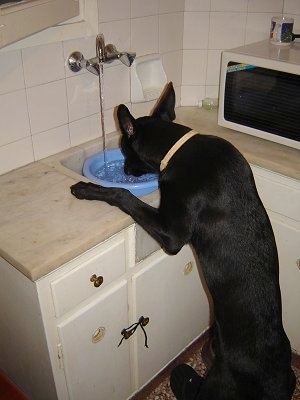 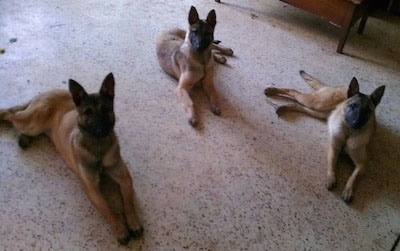 "Nova, Lady and Willow are all littermates. Their breeder was unable to care for them, so they were never touched by humans until they were 5 months old. In the pic, they are 7 months old and have just come to me to learn how to be social dogs, not kennel dogs."