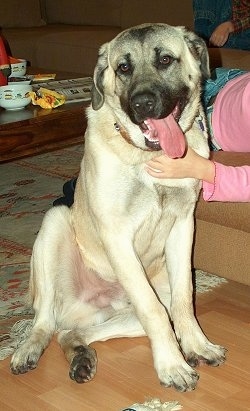 The coat came in reddish, brown-brindle, fawn, or black with a dark mask and/or infrequent white markings. It had a black nose. It was a very strong dog with an athletic build and imposing muscular strength. Its coat was short and sleek. The forehead was wide and he had a well-developed skull. The ears were fairly big and hanging. The back of the dog was higher than the front for the task of pulling a cart.

The original Belgian Mastiff is said to be extinct, however this has not been proven as some say there are still some specimens of this breed around. We do know however, there is a group in the process of re-creating this breed (see Origin, below). The original Belgian Mastiff was a very hard working bobtail mastiff of the butcher's dog type. The Belgian Mastiff's primary work was as a draft dog. He pulled carts for the poorer Belgians who could not afford horses. The Belgian army also used this breed to pull their heavy equipment. He was not known as a really friendly dog but he was very loving, loyal and protective toward his family. He was said to sometimes be vicious with strangers, which would have occurred if the dog saw himself above humans in the alpha order, but overall was not a very aggressive dog. He was intelligent, courageous and powerful. He was an active dog who was not nervous and was pretty standoffish with strangers. This breed needed some type of job to do to vent his strong drive and energy. He was a calm and obedient dog.

The Belgian Mastiff will do okay in an apartment if it is sufficiently exercised. They are relatively inactive indoors and a small yard will do.

This breed needs some type of job to do, along with a long daily walk.

The Belgian Kennel Club states the original Belgian Mastiff may be extinct. The FCI placed the breed on the suspended list. However, there is a workgroup in Belgium re-creating the breed from its standard. There is a breeder in Belgium who succeeded to re-create the breed, and his "master" dog named Bacon has already been shown at several dog shows and received excellent ratings. When this has passed all the different committees, it will enter into a 10-year FCI "stage" period. The Belgian Mastiff was used for guard work and for tracking, search and rescue. It is said that he most likely originated in France because of his resemblance to the French hounds. Later his characteristics were changed when he was exported to Belgium. The breed was used for carting in Belgium but the original dogs had become extinct as cart pulling dogs were no longer necessary with the development of the automobile.