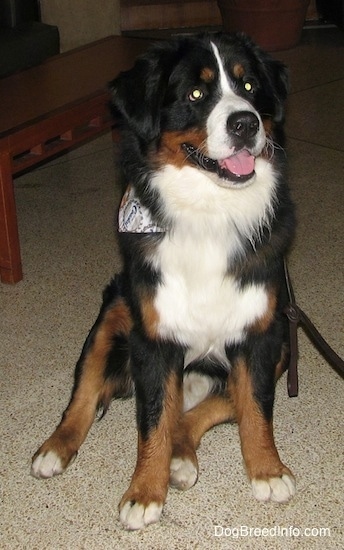 The Bernese Mountain Dog is a large, strong, sturdy, agile dog. The body is slightly longer than it is tall. The broad head is flat on the top with a moderate stop. The muzzle is strong and straight. The teeth meet in a scissors bite. The medium-sized, triangular ears are set high and rounded at the tip. The straight legs are strong. The bushy tail is carried low. Dewclaws are often removed. The feet are round with arched toes. The weather-resistant coat is moderately long, thick and slightly wavy or straight. The dog is tricolor with symmetrical markings of black, rust and white. The base of the dog is black. The dog has a white blaze on the chest and white on the head, toes and tip of the tail. Rust is on the cheeks reaching to the corners of the mouth, over each eye, on each side of the chest, on all four legs and underneath the tail.

These cheerful dogs love children. They are very intelligent, easy to train and are natural watchdogs, but not overly dominant. A Bernese Mountain Dog will be your friend for life. Self-confident, alert and good-natured, be sure to socialize well as a puppy. These dogs are slow to mature, acting like puppies longer than other breeds. They are rather friendly with strangers, and are generally good with other pets and dogs. The Bernese needs to be with people and not confined to the backyard or a kennel. These dogs are sensitive and should be trained firmly, but gently. Owners will only run into issues with this dog if they are not displaying natural leadership towards the dog, treating him more like their baby and lacking in the knowledge as to what dogs instinctually need to be stable minded. Owners who fail to convince the dog humans are alpha may find themselves with a totally different dog than what is described above. For a dog to feel secure it needs to clearly know the rules so they can be followed, thriving in structure, along with a daily pack walk to satisfy its instinct to migrate. The Bernese Mountain Dog was bred for draft work and can be trained to pull a cart or wagon.

Bernese Mountain Dogs are not recommended for apartment life. They are relatively inactive indoors and will do best with at least a large, fenced-in yard. Because of their thick coats they are sensitive to the heat and would much rather be in cold temperatures.

Large active dogs such as these need regular exercise, which includes a long daily walk.

About 6-8 years. The average lifespan of the Bernese has decreased in recent years from 10-12 years to 6-8 years. The BMD Club of America did a health survey in 2000 with 1,322 dogs. The average age of death was 7.2 years. Cancer is unfortunately a very large part of the Berner world and many Berners die young. One source states "I know of several that died of cancer at 3-4 years old and one that died two days before his 2nd birthday. The BMD Club of America is aggressively researching this cancer issue! We must see if we can end this sad situation."

Daily to weekly brushing of the long thick coat is important, with extra care needed when the coat is shedding. Bathe or dry shampoo as necessary. This breed is a seasonal, heavy shedder.

The Bernese Mountain dog originated in the Swiss mountains. Many 18th century paintings show dogs that look like a Bernese type dog. The breed was named for the Canton of Bern in Switzerland. They were working dogs particularly good at draft work, pulling carts to market. They also were used to drive dairy cattle, to watch over the farm and as companions to the farmers. By the end of the 19th century many other working dogs were being imported to Switzerland, which brought the numbers of the Bernese down as workers began to use other types of dogs. An effort was made by a group of people including Professor Albert Heim and Franz Schertenleib to preserve the breed. They went around finding what remaining dogs they could in order to stabilize the Bernese. Today the breed makes a wonderful companion and they still to this day enjoy whatever draft work you can give them. The breed’s talents are tracking, herding, watch, guarding, search and rescue, carting and competitive obedience. 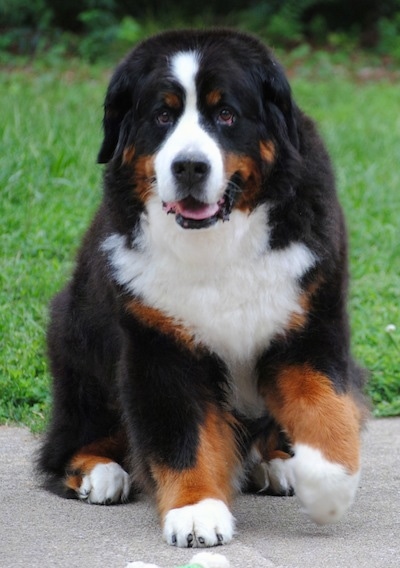 Ivan the Bernese Mountain Dog—"Ivan just turned 10 years old. He achieved his CH at 2 years of age. He is a big lap dog, is easy going and loves belly rubs. He loves squeaky toys and carries them everywhere with him. He sleeps with them close by." 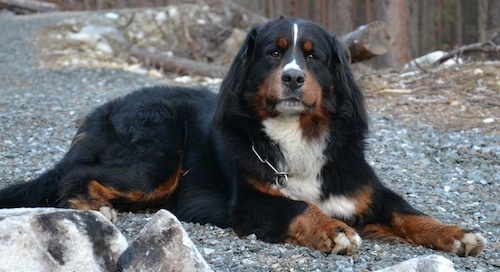 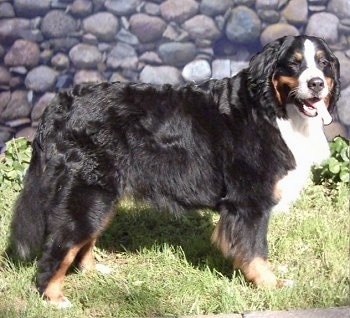 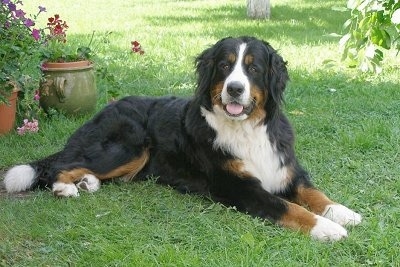 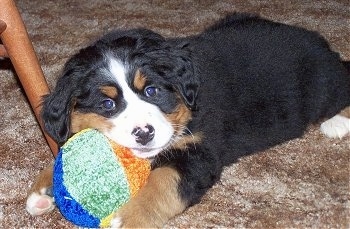 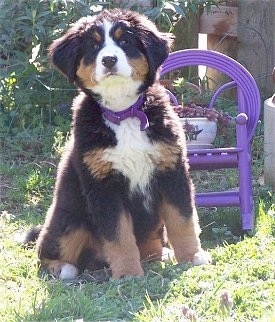 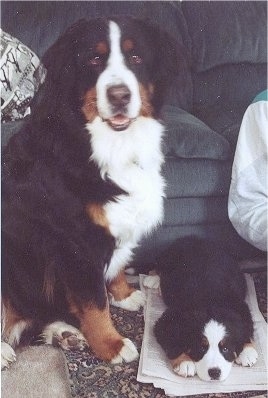 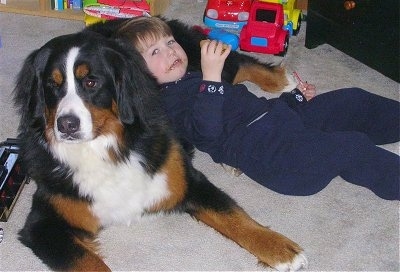