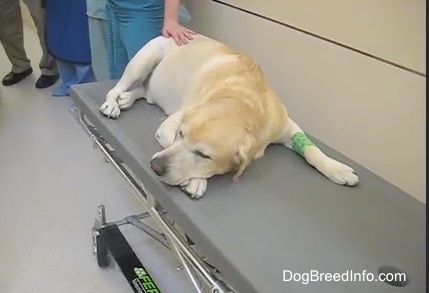 There are few ailments in veterinary medicine that rival the seriousness and immediacy of canine “bloat,” also known as gastric dilatation-volvulus (GDV). Once the bloat occurs, it is the speed at which treatment is administered that determines whether or not your dog will live or die.

Bloat occurs when something goes wrong during digestion of food. Something causes gases to build up in the stomach so fast that the stomach blows up like a balloon, stretching the organ so much that normal circulation of blood to and from the heart is cutoff. The stretching itself and the lack of blood to the stomach’s cells can cause cell death, or necrosis. What makes it even worse and more immediately serious is when the stomach actually “twists and turns” (known as volvulus) at the top near the esophagus and at the bottom of the stomach at the pyloric valve. Picture a tootsie roll candy that’s got a wrapper twisted at both ends keeping the candy lodged inside the paper. That is exactly what happens to the stomach during bloat with volvulus. Gas is trapped and can’t escape as a burp or the other end as “passing gas.” The gas builds and builds as it becomes trapped within the stomach. The stomach grows so large it cuts off circulation, as mentioned above, and irreversible damage is done to the cells. The dog goes into shock and then cardiac arrest. This can happen within several hours after the start of bloat. That is why if you suspect your dog is experiencing this problem, you must RUSH THE DOG IMMEDIATELY to the vet or animal hospital.

It is not really known what exactly triggers bloat to occur. Scientists can only make guesses due to the data taken from dogs that have experienced it. When they’ve tried to recreate the bloating conditions in a lab with test dogs, they were always unsuccessful at causing the bloat to occur intentionally.

A few examples of what scientists believe to be contributing factors to the causes of bloat are listed below:

Other Factors which Increase Risk of Bloat

Know your dog. Most of the symptoms are behavioral, at least in the very beginning, so your dog will start to act differently. The abdomen is stretched to many times its normal size due to an increase in gas. It will blow up like a balloon and is one of the first most obvious signs. In some cases, this part of the bloat event can’t be seen. But, usually you can see the distended abdomen which will also feel very hard to the touch, like a ball that has been pumped up with too much air.

This event causes SEVERE abdominal pain. So, you may see that your dog is acting uncomfortable, pacing the floor, not being about to find a comfortable position to lie down or may make sounds like he is in pain.

The biggest, most obvious symptom is that the dog appears to be nauseated. He will unsuccessfully attempt to vomit and will retch and gag, but nothing comes up, or very little, if any. He will also attempt to have a bowel movement, assume the position, but again, nothing comes out. Excessive drooling is also a common symptom.

IF ANY OF THESE THINGS HAPPEN, CALL YOUR VETERINARIAN OR RUSH YOUR DOG TO THE NEAREST ANIMAL HOSPITAL. It is better to be safe than sorry. As mentioned earlier, there are only a few hours available to handle this problem, so time is everything in a case of bloat. Your vet will put everything else aside to address your dog’s condition. 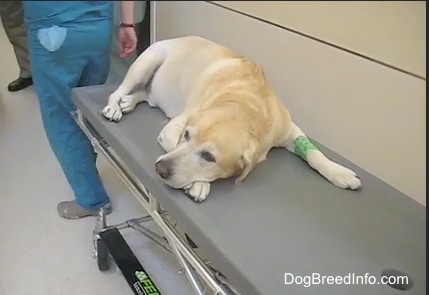 Yellow Lab with bloat after he has been sedated. Before his sedation he was crying in pain. Notice how is stomach is bloated and full-looking.

How do They Treat Bloat

There are only two basic things that are done to the dog in the case of bloat. The first thing a vet may try is to insert a tube down the throat making a passage for the gas to escape. But if the stomach has twisted volvulus, surgery is the only solution. The vet will have to make an incision into the stomach and relieve the gas that way. While in there, he may decide to perform what is called gastropexy. This is where the stomach is actually stapled into its normal position, or anchored into place, so that it cannot blow up should there be another episode of bloat.

Even if the dog has been relieved of the bloat with just a tube and not surgery, he should be surgically examined regardless, so that the vet may assess the damage done by the episode. Damaged parts of the stomach may need to be removed, or the patient’s owner may decide to allow gastroplexy since many dogs that experience bloat often go through it again at a later date. Sometimes only a day or two later, they may bloat again.

It is a good idea to have on hand at home an over the counter drug such as Phazyme, Mylanta Gas (not regular Mylanta) or Gas-X. They contain simethicone which helps reduce gas. This may buy you a little more time to get to a vet.

Breeds Most At-Risk for Bloat