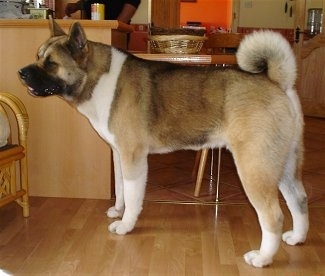 There are two types of Akitas, the original Japanese Akita breed and now a separate designation for American standard Akitas. The weights and sizes are different and the American standard allows a black mask, whereas the original Japanese breed standard does not allow for a black mask. According to the FCI, in Japan and in many other countries around the world the American Akita is considered a separate breed from the Akita Inu (Japanese Akita). In the United States and Canada, both the American Akita and the Akita Inu are considered a single breed with differences in type rather than two separate breeds.

AH-ki-ta (proper Japanese pronunciation, with the emphasis placed on the first syllable)

Massive but in balance with body; free of wrinkles when at ease. Skull flat between ears and broad; jaws broad and powerful with minimal dewlap. Head forms a blunt triangle when viewed from above. Fault—narrow or snipey head. Muzzle—broad and full. Distance from nose to stop is to distance from stop to occiput as 2 is to 3. Stop—well defined, but not too abrupt. A shallow furrow extends well up forehead. Nose—broad and black; black noses on white Akitas preferred, but a lighter colored nose with or without shading of black or gray tone is acceptable. Disqualification—partial or total lack of pigmentation on the nose surface. Ears—the ears of the Akita are characteristic of the breed; they are strongly erect and small in relation to rest of head. If ear is folded forward for measuring length, tip will touch upper eye rim. Ears are triangular, slightly rounded at tip, wide at base, set wide on head but not too low, and carried slightly forward over eyes in line with back of neck. Disqualification—drop or broken ears. Eyes—dark brown, small, deep-set and triangular in shape. Eye rims black and tight. Lips and Tongue—lips black and not pendulous; tongue pink. Teeth—strong with scissors bite preferred, but level bite acceptable.

Neck—thick and muscular; comparatively short, widening gradually toward shoulders. A pronounced crest blends in with base of skull. Body—longer than high, as to 10 is to 9 in males; 11 to 9 in females. Measurement from the point of the sternum to the point of buttocks. Chest wide and deep; reaching down to the elbow, the depth of the body at the elbow equals half the height of the dog at the withers. Ribs well sprung, brisket well developed. Level back with firmly-muscled loin and moderate tuck-up. Skin pliant but not loose. Serious faults—light bone, rangy body.

Tail—large and full, set high and carried over back or against flank in a three-quarter, full, or double curl, always dipping to or below level of back. On a three-quarter curl, tip drops well down flank. Root large and strong. Tail bone reaches hock when let down. Hair coarse, straight and full, with no appearance of a plume. Disqualification—sickle or uncurled tail.

Forequarters—shoulders strong and powerful with moderate layback. Forelegs heavy-boned and straight as viewed from front. Angle of pastern 15 degrees forward from vertical. Faults—elbows in or out, loose shoulders. Hindquarters—width, muscular development and bone comparable to forequarters. Upper thighs well developed. Stifle moderately bent and hocks well let down, turning neither in nor out. Dewclaws—on front legs generally not removed; dewclaws on hind legs generally removed. Feet—cat feet, well knuckled up with thick pads. Feet straight ahead.

Double-coated. Undercoat thick, soft, dense and shorter than outer coat. Outer coat straight, harsh and standing somewhat off body. Hair on head, legs and ears short. Length of hair at withers and rump approximately two inches, which is slightly longer than on rest of body, except tail, where coat is longest and most profuse. Fault—any indication of ruff or feathering.

Any color including white; brindle; or pinto. Colors are rich, brilliant and clear. Markings are well balanced, with or without mask or blaze. White Akitas have no mask. Pinto has a white background with large, evenly placed patches covering head and more than one-third of body. Undercoat may be a different color from outer coat.

Brisk and powerful with strides of moderate length. Back remains strong, firm and level. Rear legs move in line with front legs.

Note: While it does not make the written standard, longhaired Akitas are sometimes born in a litter if both parents carry a recessive long-coat gene. The trait is also called "Woolie" or "Silkie."

The Akita is docile, intelligent, courageous and fearless. Careful and very affectionate with its family. Sometimes spontaneous, it needs a firm, confident, consistent pack leader. Without it, the dog will be very willful and may become very aggressive to other dogs and animals. It needs firm training as a puppy. The objective in training this dog is to achieve a pack leader status. It is a natural instinct for a dog to have an order in its pack. When we humans live with dogs, we become their pack. The entire pack cooperates under a single leader. Lines are clearly defined. You and all other humans MUST be higher up in the order than the dog. That is the only way your relationship can be a success. If the dog is allowed to believe he is the leader over the humans he may become very food-possessive as he tells the humans to wait their turn. He eats first. Considered a first-class guard dog in Japan, Japanese mothers would often leave their children in the family Akita's care. They are extremely loyal and thrive on firm leadership from their handlers. They should definitely be supervised with other household pets and children. Although the breed may tolerate and be good with children from his own family, if you do not teach this dog he is below all humans in the pack order he may not accept other children and if teased, Akitas may bite. Children must be taught to display leadership qualities and at the same time respect the dog. With the right type of owner, the proper amount of daily mental and physical exercise and firm training, they can make a fine pet. Obedience training requires patience, as these dogs tend to get bored quickly. The Akita needs to be with its family. It vocalizes with many interesting sounds, but it is not an excessive barker.

Prone to hip dysplasia, both hypothyroid and autoimmune thyroiditis, immune diseases like VKH and Pemphigus, skin problems like SA and eyes (PRA, Micro, entropion) patella and other problems with the knee.

The Akita will do okay in an apartment if it is sufficiently exercised. It is moderately active indoors and will do best with a large yard.

The Akita needs moderate but regular exercise to stay in shape. It should be taken for long daily walks.

The coarse, stiff, short-haired coat needs significant grooming. Brush with a firm bristle brush, and bathe only when absolutely necessary as bathing removes the natural waterproofing of the coat. This breed sheds heavily twice a year.

The Akita Inu is native to the island of Honshu in the region of Akita in Japan, where it has remained unchanged for centuries. The Akita Inu is considered a national dog of Japan and is one of seven breeds designated as a Natural Monument. The breed has had many uses, such as police and military work, a guard dog (government and civilian), a fighting dog, a hunter of bear and deer and a sled dog. The Akita Inu is a versatile hunting dog, able to hunt in inclement weather. The Akita's soft mouth makes it possible for him to work as a waterfowl retrieval dog. The dog is considered sacred and a good luck charm in the country of Japan. Small statues of the Akita Inu are often given to new parents after babies are born as a gesture of good health and to sick people as a gesture of a speedy recovery. In 1937 the first Akita, who was named Kamikaze-go was brought to the United States by Helen Keller. The dog was a gift given to her during her trip to Akita Prefecture. Kamikaze-go died of canine distemper not long after she adopted him. In July of 1938 another Akita named Kenzan-go, who was the older brother of her first Akita, was given to her as an official gift from the Japanese government. After World War II many serviceman brought Akita Inu dogs to the USA.

There are two types of Akitas, the original Japanese Akita breed and now a separate designation for American standard Akitas. The weights and sizes are different and the American standard allows a black mask, whereas the original Japanese breed standard does not allow for a black mask. According to the FCI, in Japan and in many other countries around the world the American Akita is considered a separate breed from the Akita Inu (Japanese Akita). In the United States and Canada, both the American Akita and the Akita Inu are considered a single breed with differences in type rather than two separate breeds. The Japanese Akita is uncommon in most countries. 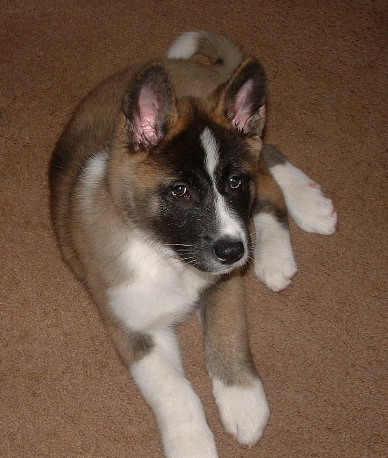 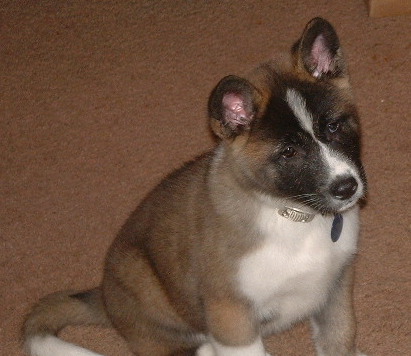 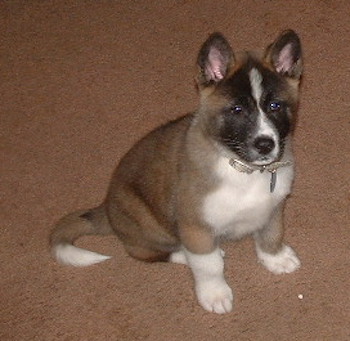 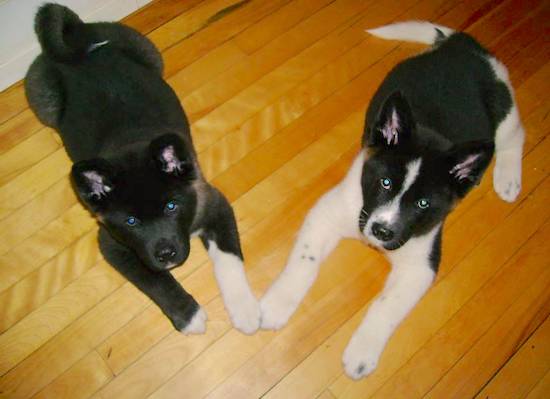 "These are my two Akita puppies at 9 weeks old. I can not believe how fast they are growing. At 6 weeks old they weighed only 9 lbs. The male named Bandit with the white stripe on his face is now almost 30 lbs, and the female named Izzy from the same litter is almost 27 lbs. They are filling a huge void in my life, and I am so happy I got them."

See more examples of the Akita