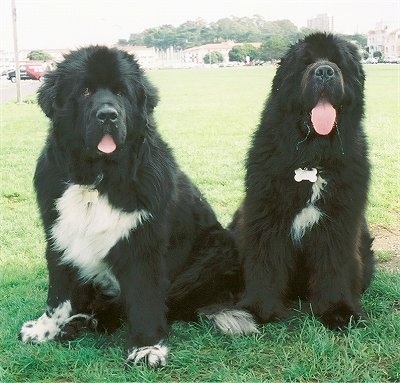 "The pronunciation you provide for the breed of Newfoundland dogs is incorrect. It is "New-fun-land" dogs. It is a source of some hilarity to native "Newfunlanders" to hear such variations as the one you suggest."

"On your page about Newfoundland dogs you have included an incorrect pronunciation of Newfoundland. The portion of the word spelt ‘found’ is pronounced as it is written, not as FUN."

"Regarding your information concerning the Newfoundland; the proper pronunciation of the name is "Newf-in-land". When said correctly it will rhyme with UNDERSTAND. Many, many times we hear the name of our province, and the beautiful dog mispronounced. It becomes quite irritating, especially when it’s mangled by people who profess to know something about our wonderful dog and/or people. Please, it's not "Newfinnlund" or Newfundlind or Newfoundlind."

"As a native of "Newfoundland and Labrador" please know that I am 100% positive that your pronunciation of the Newfoundland breed and our province's name is wrong. Please do NOT suggest people pronounce Newfoundland land as Newf-in-land. It is spoken as it is spelled. If it helps: New-found-land."

The Newfoundland is a strong, massive dog. The head is broad and heavy with a slightly arched crown. The neck and back are strong. The wide muzzle is about as broad as it is deep, and rather short. The stop is moderate. The nose is generally black except on bronze-colored dogs, which have brown noses. The teeth meet in a level or scissors bite. The deep-set, dark brown eyes are relatively small and spaced wide apart. The triangular shaped ears have rounded tips and are relatively small. The legs are well muscled, straight and parallel. The cat-like feet are webbed. Dewclaws can be removed. The tail is strong and broad at the base, hanging down. The double coat is flat and water-resistant. The oily outer coat is coarse and moderately long, either straight or wavy. The undercoat is oily, dense and soft. Dogs that live indoors tend to lose their undercoats. Coat colors include black (most common), black with blue highlights, black with white markings, brown, gray, and white with black markings known as a Landseer. Note: in the USA and Great Britain the Landseer is considered the same breed as the Newfoundland, however in some European countries the Landseer is a totally different breed than the Newfoundland. Landseers in Europe have longer legs than Newfies; Landseers are not so massive, they are more sporty dogs. In shows, they compete separately.

The Newfoundland is a dog with an outstanding, sweet temperament, courageous, generous, peaceable and intelligent. A calm, patient dog that is mild with guests and obedient with its master. They are very devoted, loyal and trustworthy. Its huge body tends to move rather slowly. They rarely bark, but are protective and brave when they need to be. When an intruder is caught they are more likely to hold them at bay, either by trapping them in a corner or placing themselves in between the burglar and the family rather than an all-out attack. They are smart enough to know who is a threat to the pack and who is not. Very sociable and gentle. Any dog, other animal, child, or visitor who has no evil intention will receive a friendly welcome. The Newfoundland usually gets along with other dogs, but should be socialize well with them, giving a correction at any sign of aggressiveness to insure this behavior. Generally good with other animals. Patient, playful and loving with children. Enjoys the outdoors, but also needs to be with their family. The Newfoundland tends to be very messy when drinking water and often drinks a lot. They do drool, especially after getting a drink, but generally are not one of the worst offenders compared to some other giant breeds. They love to swim, and will lie in water if they get the chance. This breed may be slightly difficult to train. Training must be conducted in a calm and balanced manner. In order to achieve a well balanced dog one must be calm, but firm, confident and consistent with the dog. Give the dog rules he must follow and stick to them, along with a daily pack walk where the dog must heel beside or behind you. No pulling ahead. Teach the dog to enter and exit door and gateways after the human. These dogs are very sensitive to the tone of your voice. Take this into account during training; one needs to be calm, but firm. Adult Newfoundlands eat only about as much as a Labrador, but puppies eat more.

Prone to a hereditary heart disease called sub-aortic stenosis (SAS) and hip dysplasia. Be cautious that the Newfoundland does not get fat.

Will do okay in an apartment if sufficiently exercised. They are relatively inactive indoors and a small yard is sufficient. Newfies prefer colder climates and do not do well in the heat. Make sure there is always cool water and a shaded place for them to lie.

This gentle giant is quite content to laze around the house, but still needs to be taken on a daily walk. While out on the walk the dog must be made to heel beside or behind the person holding the lead, as in a dog's mind the leader leads the way, and that leader needs to be the human. It will enjoy frequent opportunities to swim and frolic.

Varies greatly from 2 to 15 puppies, with an average of about 8 to 10 pups

Daily to weekly brushing of the thick, coarse, double coat with a hard brush is important. The undercoat is shed twice a year in the spring and fall and extra care is required at these times. (The heaviest shedding period comes in the spring). Avoid bathing unless absolutely necessary, as this strips away the coat's natural oils. Instead, dry shampoo from time to time.

The Newfoundland may be a descendant of the Viking "bear dogs" or nomadic Indian dogs. Others believe the Newfoundland is a close relative of the Labrador. This theory is based on the similarities between the two breeds and the fact that the coast of Newfoundland and Labrador are very close to each other. It is possible that the Labrador, which is an excellent swimmer, was able to swim the Strait of Belle Isle or cross on foot when the water was frozen. Many believe the Newfoundland originated from crosses between Tibetan Mastiffs brought to Canada by British or European fisherman and local dogs early in the 1700s. In any case, the resulting breed found a niche aiding fisherman off the coast of Newfoundland, Canada.

Others say the Newfoundland dog is related to the Labrador, however not in the way stated above.... The breed was already in St John's in Newfoundland 500-odd years ago when Cabot arrived, this much is known from written accounts of visitors just a few years after his landing. The Vikings, who were here 500 years before that or another group may have brought the animal to these shores. The Labrador dog is descended from a dog called the St. John's Water Dog and selective pairing with the Newfoundland. In the early days of this breed, before they were called Labs they were known as "the lesser Newfoundland dog." The name Labrador was given to them after they started to become popular for their fine attributes.

This gentle giant was used for hauling in nets, carrying boat lines to shore, retrieving anything which fell overboard and rescuing shipwrecked and drowning victims. The breed was also used to haul lumber, pull mail sheds, deliver milk and carry loads in packs. The Newfoundland was, and still is, an outstanding instinctive water rescue dog. Many owe their lives to members of the breed. In 1919 a gold medal was awarded to a Newfoundland that pulled to safety a lifeboat containing twenty shipwrecked people. It has been called the St. Bernard of the water. During World War II, Newfoundlands hauled supplies and ammunition for the armed forces in blizzard conditions in Alaska and the Aleutian Islands. Today, safer ships and improved communications have limited the dog's processional activities but its appeal has not diminished due to the fact that it is considered a handsome, devoted, delightful companion. It is still very good at water trials, competitive obedience, weight pulling, carting, backpacking, and as a watchdog and guarding dog. The Newfoundland Club of America holds drafting and water rescue tests. 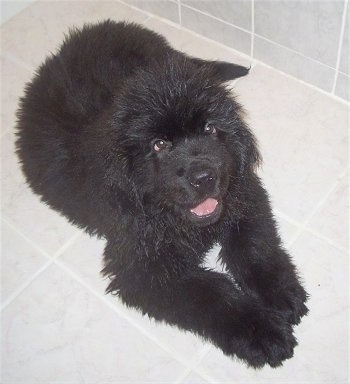 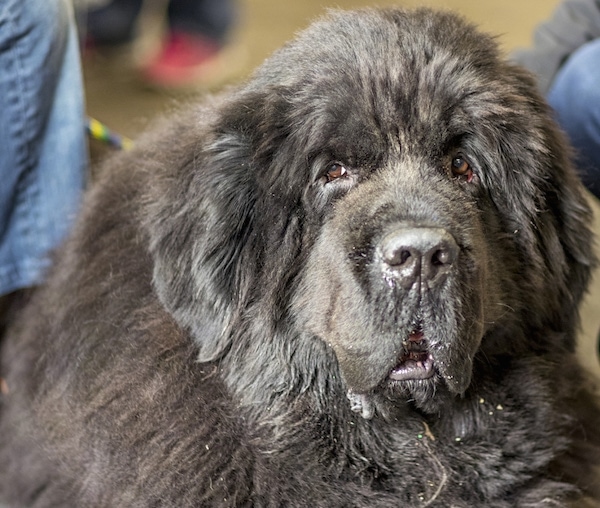 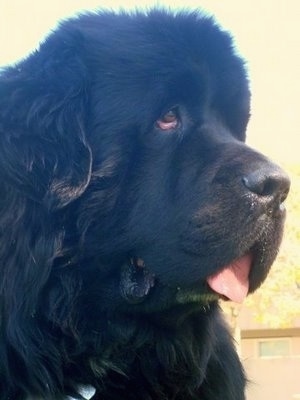 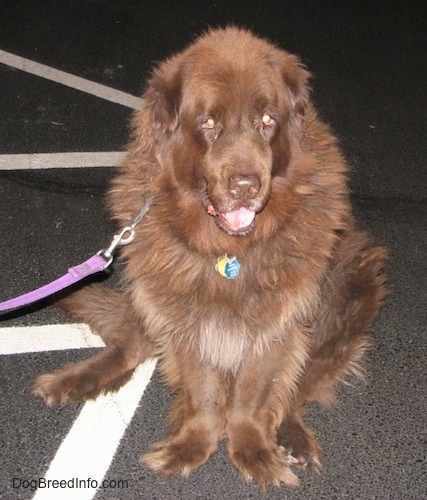 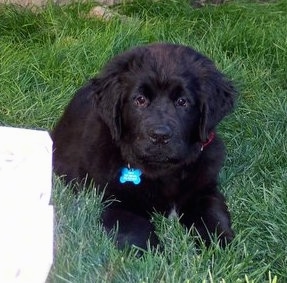 Lucy the Newfoundland as a puppy at 3 months old 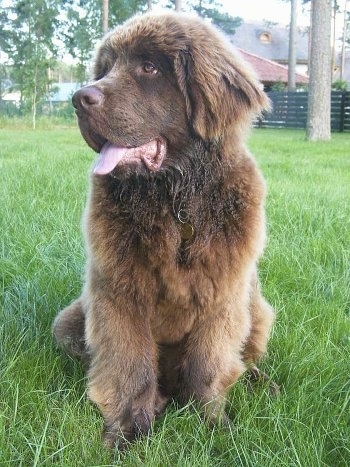 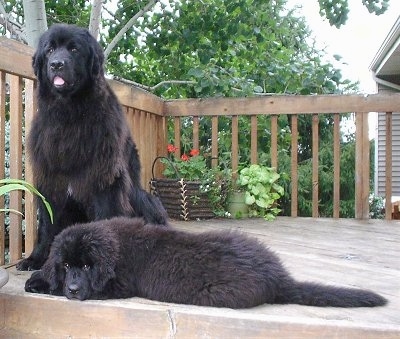 Newfoundlands Brody and Hanna—Brody is shown here at 2 years old and a Minnesota Vikings fan. Hanna is just a pup at 5 months old. 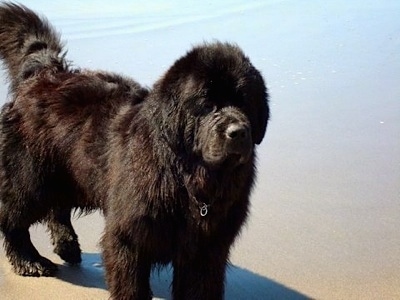 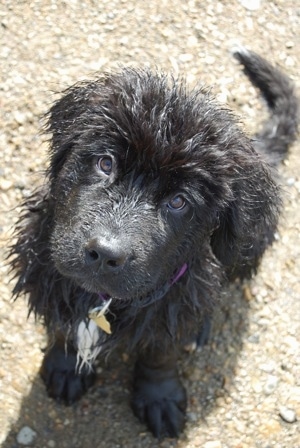 "This is our Newfoundland puppy Stella at 3 months old. She is a very happy puppy, and loves the water." 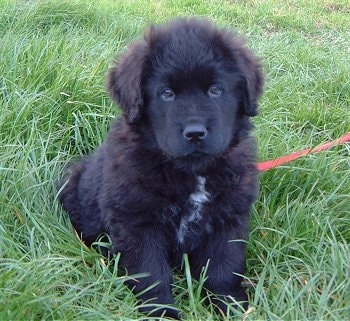 See more examples of the Newfoundland