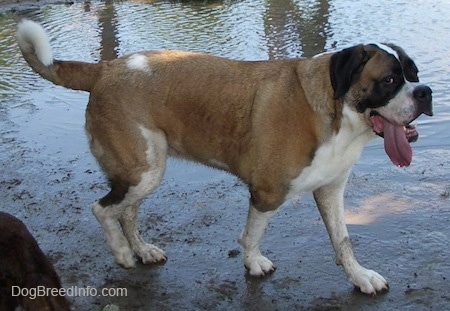 The Saint Bernard is a giant, strong, muscular dog. As long as the weight stays in proportion with the height, the taller the dog the more prized it is. The massive head is powerful. The muzzle is short, wider than it is long. The teeth meet in a scissors or level bite. The nose is broad, with wide open nostrils, and like the lips is black in color. The medium-sized eyes are set somewhat to the sides and are dark in color. The medium-sized ears are set high, dropping and standing slightly away from the head. The legs are muscular. The feet are large with strong, well-arched toes. The long tail is broad and powerful at the base held low when the dog is relaxed. Dewclaws are usually removed. There are two types of coat: rough and smooth, but both are very dense and come in white with markings in tan, red, mahogany, brindle and black, all in various combinations. The face and ears are usually black. In the rough-coated dogs, the hair is slightly longer and there is feathering on the thighs and legs.

Saint Bernards are extremely gentle, friendly and very tolerant of children. They are slow moving, patient, obedient, extremely loyal, eager and willing to please. Be sure to socialize this breed very well at a young age with people and other animals. It is highly intelligent and easy to train; however, training should begin early, while the dog is still a manageable size. Teach this dog not to jump on humans starting at puppyhood. Bear in mind that an unruly dog of this size presents a problem for even a strong adult if it is to be exercised in public areas on a leash, so take control right from the start, teaching the dog to heel. The Saint Bernard is a good watchdog. Even its size is a good deterrent. They drool after they drink or eat. Be sure you remain the dog's pack leader. Dogs want nothing more than to know what is expected of them and the St Bernard is no exception. Allowing a dog of this size and magnitude to be unruly can be dangerous and shows poor ownership skills. Saint Bernards have a highly developed sense of smell and also seem to have a sixth sense about impending danger from storms and avalanches.

Prone to "wobbler" syndrome, heart problems, skin problems, hip dysplasia, tumors and extropion—a folding outward of the eyelid rim, usually on the lower lid. Twisted stomachs should be watched for. As these dogs are prone to bloat, it is best to feed them two or three small meals a day instead of one large meal.

The Saint Bernard will do okay in an apartment if it is sufficiently exercised. These dogs are relatively inactive indoors and a small yard is sufficient. They can live outdoors, but would much rather be with their family. They have a low tolerance for hot weather, warm rooms and cars. Can wheeze and snore.

A long walk each day is needed to keep the Saint Bernard in good mental and physical condition. Puppies should not have too much exercise at one time until their bones are well formed and strong. Short walks and brief play sessions are best until the dog is about two years old.

Both types of coat are easy to groom. Comb and brush with a firm bristle brush, and bathe only when necessary. Shampoo may strip the coat of its oily, water-resistant properties, so use a mild soap. The eyes, which may be inclined to water, need special attention to keep them clean and free of irritants. This breed sheds twice a year.

The Saint Bernard was founded in 980 AD by St. Bernard de Menthon and bred by monks, most likely by crossing the ancient Tibetan mastiff with the Great Dane, Greater Swiss Mountain Dog and the Great Pyrenees. The Alpine Mastiff, an extinct Molosser dog breed is the progenitor to the modern day Saint Bernard. The first Saint Bernards were of the shorthaired variety, as the longhaired variety's coat tended to collect icicles. They were used by the Hospice, a refuge for travelers through the dangerous Alpine pass between Switzerland and Italy. In the middle of the seventeenth century, the Saint Bernard became popular as a rescue dog working to save people from avalanches in the snowy passes near the Hospice. The dogs are able to smell a person under many feet of snow. They have saved thousands of people searching out and finding lost or injured travelers. The dogs would work in packs looking for the victims. When found they would lick and lie down with them in order to keep them warm. While a dog or more would lie with the body(s), another dog would head back to the Hospice to alert them that they found the humans. A full rescue team would then be sent out. The Saint Bernard has also been known to be able to predict storms and avalanches. This may be possible because of the dog's ability to hear very low-frequency sounds which humans cannot. The Saint Bernard was recognized by the AKC in 1885. Some of the Saint Bernard's talents are search and rescue, guard dog, watchdog and carting. 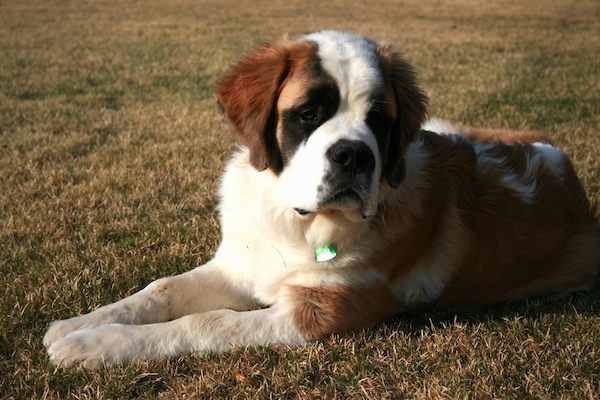 George the Saint Bernard puppy at 7 months old—"George is the most laid back easy going pup around!! You really have to give him a nudge to get him up and going! He is super friendly towards strangers and other animals and he LOVES kids!!!" 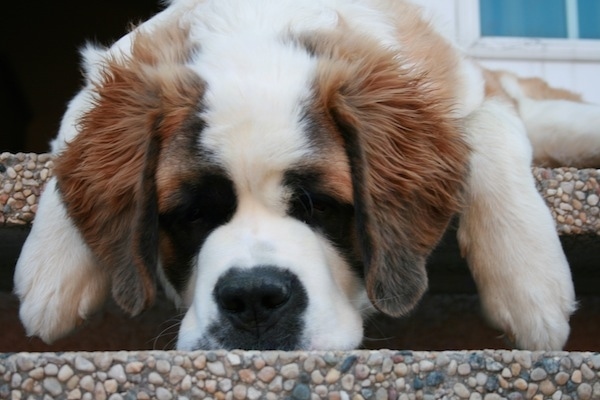 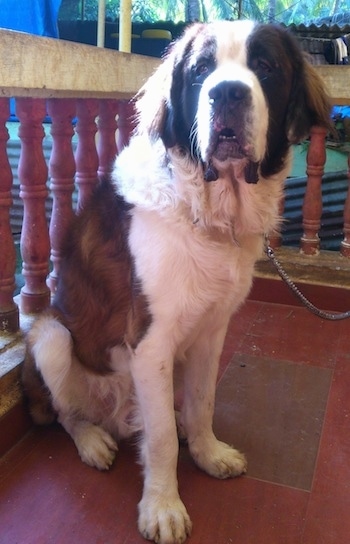 Jimmy the purebred Saint Bernard at 1 year old from India 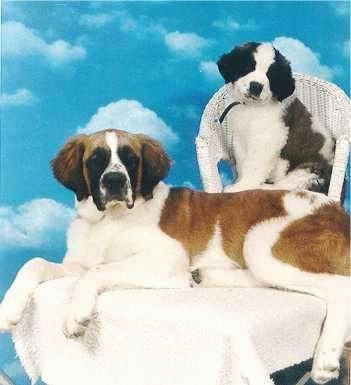 Hercules at 5 months and the new pup Dr. Seuss AKA Doc as a 7-week-old puppy 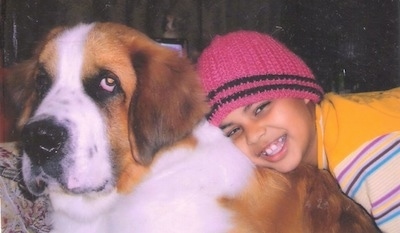 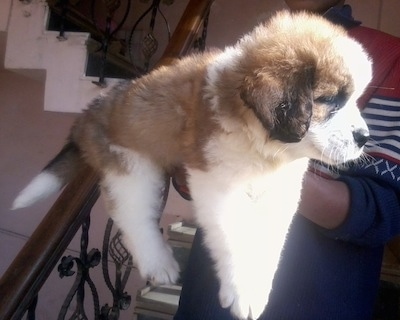 Leo the Saint Bernard as a puppy 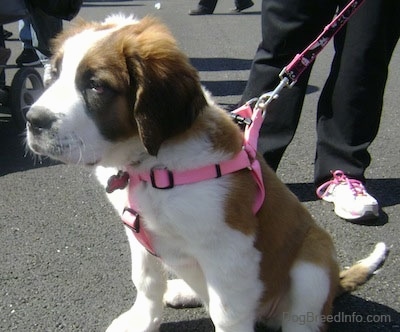