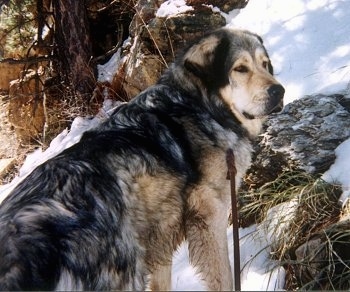 The Tibetan Mastiff is a massive, giant dog with sturdy bone structure. The body is slightly longer than tall. The somewhat wrinkled head is broad, heavy and strong. The broad muzzle is square when viewed from all sides. The large nose is black. The teeth meet in a scissors or level bite. The upper lip usually covers the lower lip. The slightly slanting eyes are almond shaped, deep-set and medium in size. Eye color comes in shades of brown. The pendant ears are V-shaped, hanging forward close to the head. The neck is muscular and arched with a moderate dewlap. The dewlap is more prominent in males than in females. The topline is level. The feathered tail is curled over the back. The front legs are straight with feathering. The feet are cat-like and may have feathering between the toes. Dewclaws are sometimes removed. The double coat is immense and thick with a heavy mane around the neck and shorter hair on the head. The coat color comes in black, brown and blue-gray, all with or without tan markings and various shades of gold. It can also have white markings.

Some breeders have labeled the Tibetan Mastiff into two types, although both types are often born in the same litter: the Do-khyi and the Tsang-khyi. Tsang-khyi means "dog from Tsang" and is described as the "monastery" type. It is taller and heavier boned with more wrinkles around the face. The Do-khyi or "nomad" type is leaner with fewer wrinkles.

The Tibetan Mastiff is courageous, fearless, even-tempered, calm and thoughtful. Very loyal to its own family. Tends to bark at night if left outside, but will be quiet indoors. It is an outstanding flock guardian and is ferocious against wolves, leopards or any prey that try to approach its flock. It is easy to housebreak, but matures later in life than the average breed. The Tibetan Mastiff needs a firm, confident, consistent pack leader to prevent it from becoming willful and stubborn, overprotective and territorial. These dogs have a strong desire to please their owners. They are loving with children, but can distrust and be reserved with strangers if not properly socialized. It comes naturally to this Mastiff to guard its family and their property. It has to be raised to adulthood in a careful, well-balanced manner. A stable, well-adjusted and trained dog is for the most part generally good with non-canine pets. It is possible for them to get along with other dogs if the owners are able to communicate with them that fighting is an unwanted behavior. Tibetan Mastiffs will not listen if they sense that they are stronger minded than their owners. Owners need to possess a natural air of authority to their demeanor. The objective in training this dog is to achieve pack leader status. It is a natural instinct for a dog to have an order in its pack. When we humans live with dogs, we become their pack. The entire pack cooperates under a single leader. Lines are clearly defined and rules are set. Because a dog communicates his displeasure with growling and eventually biting, all other humans MUST be higher up in the order than the dog. The humans must be the ones making the decisions, not the dogs. That is the only way your relationship with your dog can be a complete success. When owners make it absolutely clear they are alpha over the dog in a calm, but very firm manner, and the dog is well exercised, trained and socialized, it can be a very good family companion. This breed requires an experienced owner.

Prone to hip dysplasia, thyroid problems, skin conditions and ear infections. Also a genetic problem called Canine Inherited Demyelinative Neuropathy (CIDN), which is fatal. The disorder will be evident in puppies between 7 and 10 weeks of age and the pup will pass away by 4 months of age.

The Tibetan Mastiff can live in an apartment life if it is very well exercised. These dogs are not very active indoors.

The Tibetan Mastiff needs to be taken on daily walks. While out on the walk the dog must be made to heel beside or behind the person holding the lead, as in a dog's mind the leader leads the way, and that leader needs to be the human. Be careful that the bones, muscles and joints of the young dog are not overworked during the growing stage by not overdoing the physical side of its life. However, they will still need to walk each day to satisfy their migration instinct.

An average of 5 - 12 puppies. Tibetan Mastiff dams typically go into heat only once a year, whereas most other dogs go into heat twice a year.

The Tibetan Mastiff should be brushed regularly. In the winter the coat has an abundance of very thick hair, which sheds once a year for the duration of a month, when the weather gets warmer. During this time your dog should be brushed and combed every day. The Tibetan Mastiff is sometimes good for allergy sufferers, depending on the individual and the type of allergy they have.

The Tibetan Mastiff is descended from the famous Tibetan dogs that were the source of the majority of Molossers and Mastiffs throughout the world. The ancient Tibetan Mastiff may have been in existence as early as 1100 BC. These mastiffs developed into the Tibetan Mastiff we know today during the time period when they were isolated in the Himalayan mountains in Tibet for centuries. The dogs were used to guard property. Usually confined during the day and let loose at night, sometimes a single dog would guard an entire village. The dogs were often tied up as puppies to enhance aggressive tendencies. They were often left behind to guard the families and tents when the men left to move the flocks to higher pasture. It was not until Queen Victoria of England was given one of these dogs in the mid-1800s that they came out of isolation. It was not long before more dogs were imported to England. The British wrote up a standard and began to breed them. Marco Polo described the Tibetan Mastiff as "tall as a donkey with a voice as powerful as that of a lion." Tibetan Mastiffs were imported from India, Nepal, Ladakh and Afghanistan to the United States in the 1970s and were used as foundation stock for the breed. Now rare in Tibet, the Tibetan Mastiff is gaining popularity in both the United States and England. The American Tibetan Mastiff Association was formed in 1974 and serves as the breed's official registry and network in the United States. The Tibetan Mastiff was first recognized by the AKC in 2006. Some of the Tibetan Mastiff’s talents are livestock guardian and home guardian.

This breed can be shown at rare breed and American Tibetan Mastiff Association dog shows. 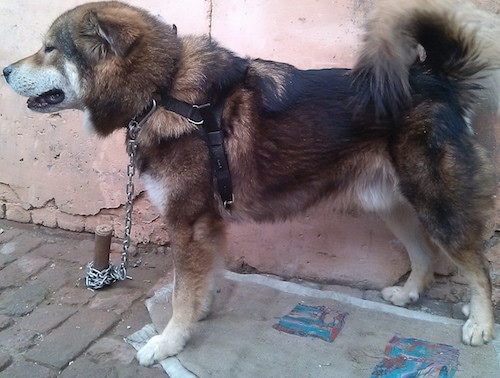 Brock the Tibetan Mastiff at 1 year old from India—"Brock is calm and gentle,but also has a strong tendency to bark in night, although he is very friendly." 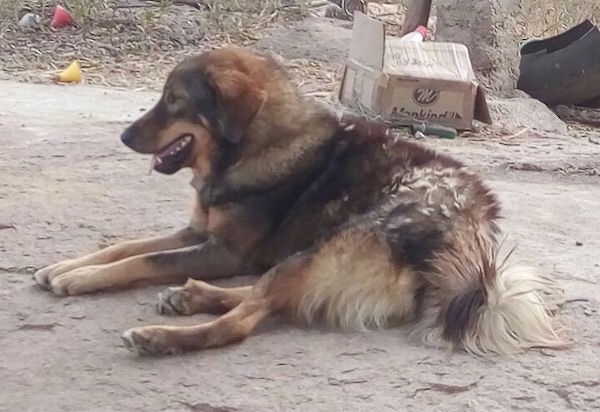 Rambo the Tibetan Mastiff at 11 months old from India 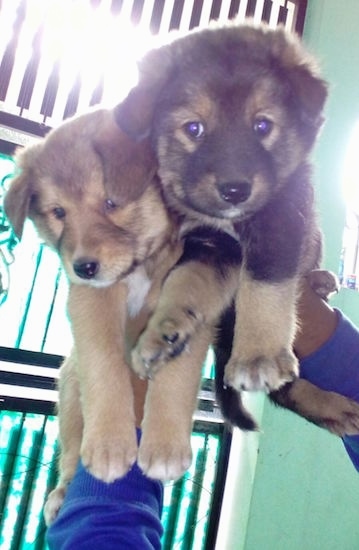 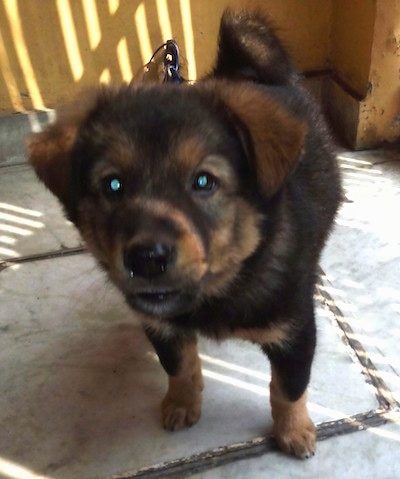 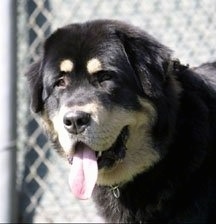 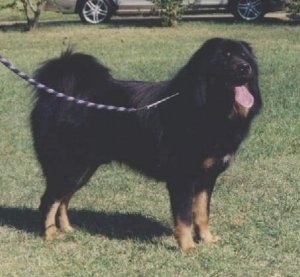 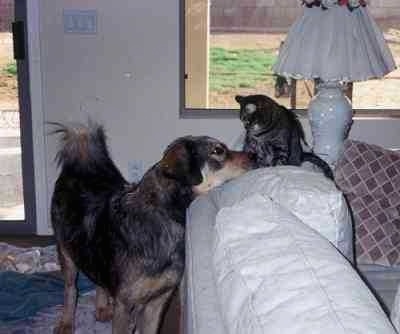 Ipo the Tibetan Mastiff at 11 months old with her friend Azriel, a 5-year-old tabby cat 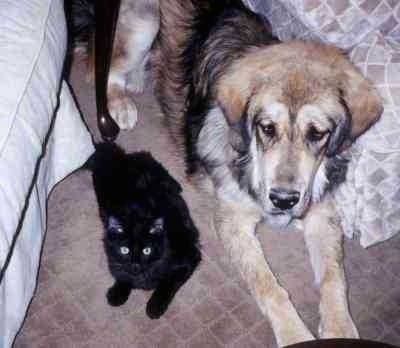 Mato the Tibetan Mastiff at 10½ months old with his little buddy Sport, a 6-month-old black kitten 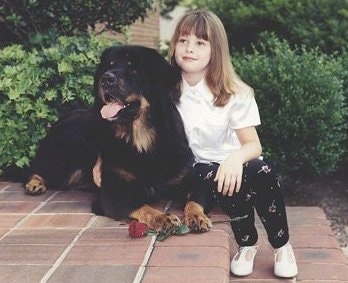 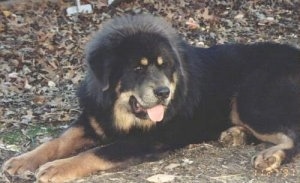 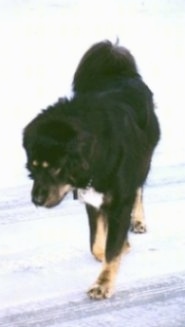 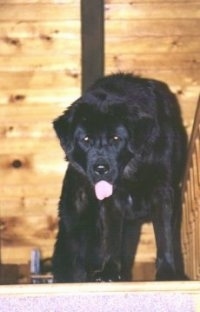