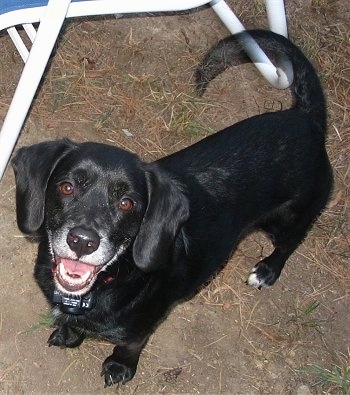 Odie, a Beagle/Cocker mix (Bocker) at 6 years old—his owner says, "He is 26 pounds (smallest from his litter) and very lively and mostly obedient, but rather stubborn. His whole litter was Cocker Spaniel colors and as an adult, he is built almost entirely like a Beagle and exhibits predominantly Beagle traits and behavior, although rather shy around people. His face is graying, but he has been solid black with white hind feet and throat/chin his whole life."

The Bocker is not a purebred dog. It is a cross between the Beagle and the Cocker Spaniel. The best way to determine the temperament of a mixed breed is to look up all breeds in the cross and know you can get any combination of any of the characteristics found in either breed. Not all of these designer hybrid dogs being bred are 50% purebred to 50% purebred. It is very common for breeders to breed multi-generation crosses. 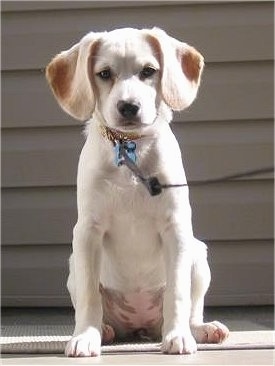 Maxie the Bocker (Beagle / Cocker hybrid) at 3 ½ months old and 11 pounds—"She is very friendly and learns commands and tricks quickly. However, she has a mind of her own and is having a rough time with teething. Our fingers and toes are feeling the brunt of it. We are looking forward to her post-puppy days when she is a little calmer; however, we couldn’t imagine our lives without this angel!" 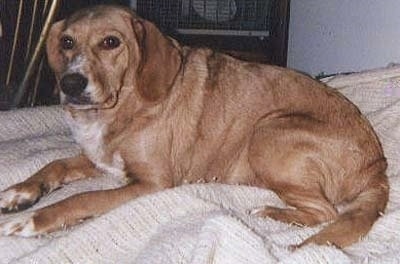 "This is a photo of my female dog Perle. She was a Beagle / Cocker mix, built more like a Beagle, but heavier bodied like a Cocker. Her hair was short like a Beagle, but had swirls in it like a Cocker. She lived to a ripe old age of 14, when cancer took her from me. She is missed terribly, even 3 years later. She was a fabulous, laid back, extremely loving girl. We spent many days sitting in bed forehead to forehead, just looking into each other’s eyes."