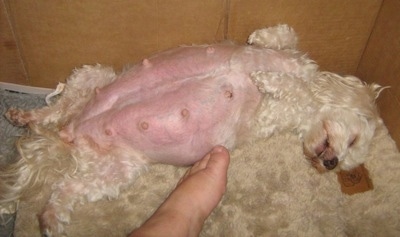 My Maltese Poodle, Holly, has been a member of my family and my best friend for three years since I moved out on my own. I have health problems and on the days where I cannot get up she lies with me and comforts me. On the days I'm well we do things for her.

When I bought her she had recently had puppies but there was no record of the birth or how it went as she was a stray. I mated her with my friend’s Schnoodle who has a similar temperament and is her best dog friend. The pregnancy took and went well. She grew very quickly.

She had stopped eating for three days at day 53 because the pups took up so much room. She was on day 59 when her temp dropped so I was pretty sure labor was about to start. About a week before the birth, I noticed a scar on her stomach that hadn't been visible before and became worried that she had been delivered surgically in the past. For this reason I had everything ready for most emergencies and read up on how to handle them. I knew I would have to stay with her throughout the birthing process in case a pup got stuck.

At 10:20 p.m. Holly started to stare at me and pant so I knew stage one had started. I had already set everything up and she mentored the whelping box. As the night progressed nothing seemed to change. She kept panting and staring but no contractions.

At 11:30 a.m., with no sleep, I took Holly to the toilet. After coming back in her water broke and the contractions started. At 12:20 she started to push and the first pup’s sac emerged but after 20 minutes had not progressed. I rang the vet who said to give it another 10-15 minutes and if no change get her straight there. 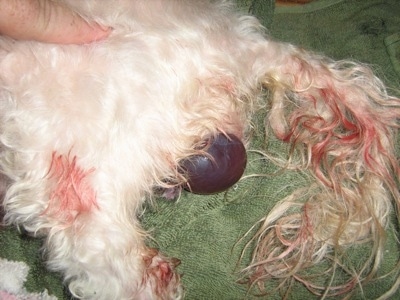 At 1:05 p.m. just as I was going to take her, the sac, with a little help from me, slid out. Holly didn't seem to be ready to break the bag so I did it and I waited about 10 minutes before tying off the chord and then cutting it. I put him on the teat. He suckled well. He weighed 188 grams at birth. She slept till the contractions started again. It was helped by the first pup suckling. 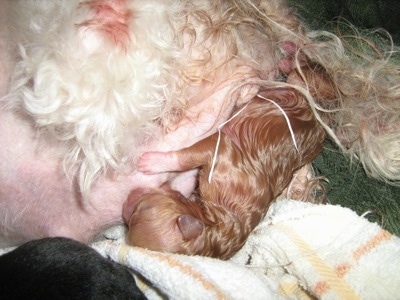 Just after 2:00 p.m., she started to push again as her water broke so I put the pup in a heated bed and waited. The next pup was born at 2:15 p.m.; a little golden-coloured girl weighing 172 grams. She was still attached to the placenta which would not come out enough for me to tie off and cut so the pup proceeded to suckle whilst it waited. It was so cute. 15 minutes later the chord was tied and cut.

Pup number three seemed to take forever and once the sac emerged it came quickly clear that it was stuck. I applied pressure around the vulva but to no avail. I tried to lubricate the entrance but still it wouldn't come. I was on the phone to my daughter telling her to meet me at the vet as a C-section seemed to be in order. At this stage I slid my lubricated hand around the sac inside her vulva and on the next contraction gently pulled. The pup came out. It was 4:15 p.m. I could see it didn't look right. 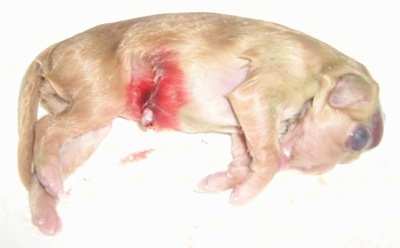 The sac was intact and I thought for a second that it was just a placenta then felt a foot in the bag. I ripped the bag open but the pup was severely deformed. It was also stillborn. It couldn't have lived because it couldn't have fed. I was devastated. She weighed 120 grams. Sometimes nature is so sad. 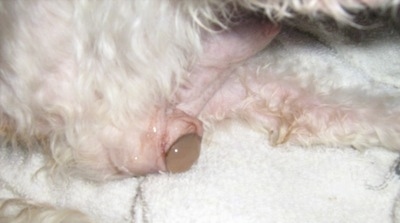 At 4:50 p.m. Holly started to push again and this pup slipped out with no problems. She weighed 156 grams. A little black curly-haired girl. 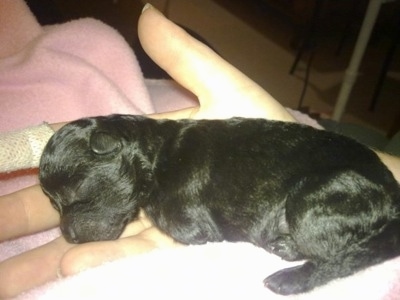 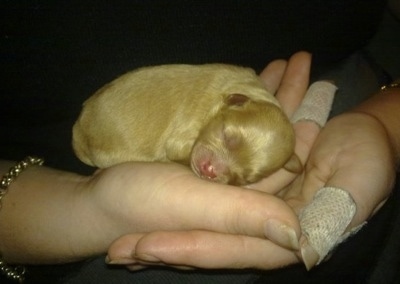 I could still feel kicking so I knew there was at least one more. At 4:45 p.m. she started to push again and at 5:55 p.m. a cream girl was born weighing 174 grams. She had a very easy entry into the world. 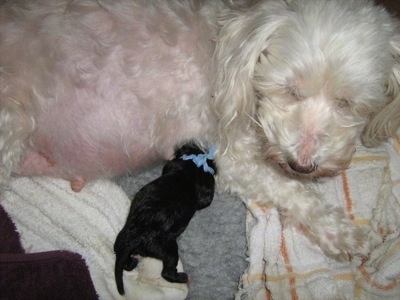 Holly seemed to settle really quickly. She was exhausted. All but one of the pups (the little black girl, born fourth) were suckling well. Each latched on. The fourth one couldn't latch on and milk came out her nose.

I started to supplement feed her but had a lot of trouble as milk was coming out the nose and into the lungs. I suctioned the pup each time and she seemed alright. I was sure she had a cleft palette but by lunch the next day she was suckling well and no milk was coming out her nose. I was so pleased because two-hour feeding was killing me already. 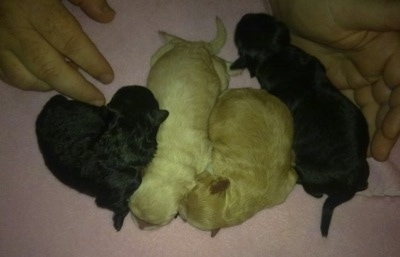 The first night, Holly had a big loss in her bed. There was a lot of green fluid from the placentas of the last two detaching. This worried me but what worried me more is that she stopped eating. She was still drinking however and her milk had come in.

Over the last two days she has gotten weaker and she won't eat even her favorite foods. She has had diarrhea since just before the birth. I see the vet in the morning. Her temp is 38.5°C tonight which is just over her normal night temp.

I don't think she has an infection but rather is just exhausted from the 18-odd hours of labor and the placentas going through her. She ate them from inside herself. She was dragging them out and eating them before I could get them. Better safe than sorry, though. She is too important to me.

On day three she had not gotten any better but at the same time really hadn't gotten a lot worse. The diarrhea and not eating were really affecting her strength and I was worried about her milk supply and even the thought of losing her.

I took her to the vet who gave her an injection in case some placenta was retained and some antibiotics and meds for the diarrhea, A day later she is 90% of her old self; so quick a recovery. Her pups are gaining heaps of weight and her milk seems to have increased. A very happy result.

If you have pictures of your dam giving birth that you would like to share, send them in!