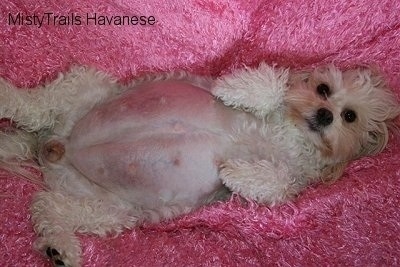 She has refused breakfast.

OK, so the temperature has dropped. Make sure all your whelping supplies are brought out and ready (see whelping supplies). Plug in your heating pad or your warming box, and put your rags/clothes in to warm.

CALL your vet and give him a heads-up. 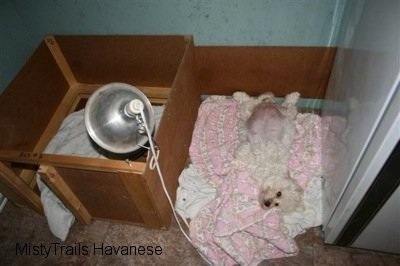 She is lying beside her whelping box right now, all stretched out in the first stage of labor. She is stretching out so the pups can all get lined up. 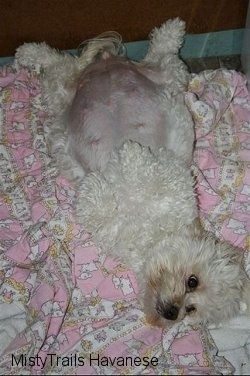 (No signs of labor), no distress; she is just lying down.

The house was busy till now. Some dams will wait till the house quiets down before they will go into full labor. Mysti seems to be stalling. A dam has the ability to shut down and wait, so if your home is busy, ask people to leave.

8:30 p.m.—an internal exam with rubber glove and lube shows she is dilated. 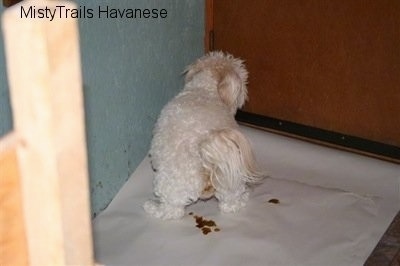 I give her paper, and she is trying to poop every few minutes. She is now feeling pressure of the pups, and having LOTS of little poops. I have given her some Nutri-Cal to boost her energy. 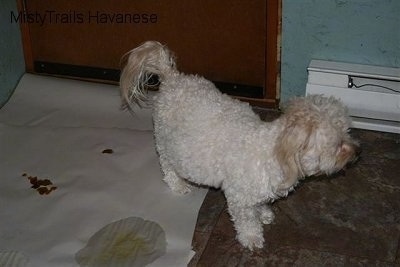 As she is leaving the paper her tail is up, and she is having a contraction. If your dog insists on going outside at this stage, as many new moms do not know the difference between having babies and pooping so they insist on going outside because it feels like they have to poop. If you take your dam outside she MUST be on a leash. Many a dog has gone missing at this stage. Go out with a flashlight (if dark), a leash AND a cloth in case she pops out a puppy (be prepared). Toy dogs are easier to manage at this time, as you can set up a potty station. 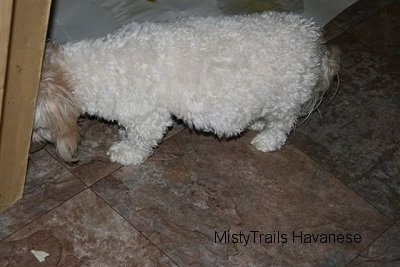 11:45 p.m.—I would like to see things starting, so I gave her 15ml of Calsorb, and she vomited it up. I have given her another internal; she is fully dilated with a pup at the beginning of the birth canal, about four inches up. Some people give oxytocin at this stage; I highly recommend NOT!! It causes the muscles to contract and the placentas to detach. It is dangerous stuff. Try calcium FIRST. It works.

If you have no Calsorb or liquid calcium, then vanilla ice cream works great between puppies.

REMEMBER to have the dam on a LOW calcium diet, at least ten days before whelping. NO puppy food, nothing with extra calcium like cottage cheese or sardines.

She is in a little distress now; she has the squirts (diarrhea), vomiting and shaking. But I think she has absorbed some of the calcium.

The internal I gave her was a little more aggressive, not to hurt her, but I did some feathering to try to get her going. It works most of the time. 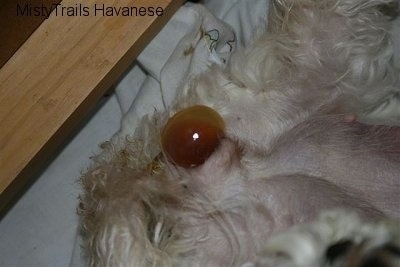 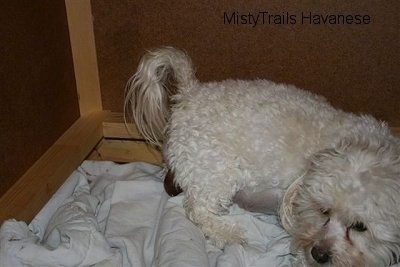 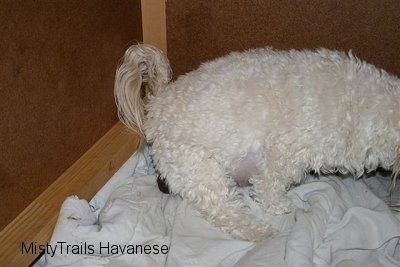 Pup has gone back inside.... After several attempts to get this puppy out, she exhausts herself and just cannot get it past this point. At the NEXT contraction I will need to help her. 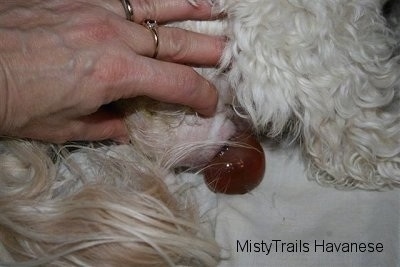 Take your fingers, and pushing with your thumb, kinda try to pull that skin back to get the head out. She may scream, she may try to bite, you may need a helper. This will hurt her.... I push the puppy head out, even though it is still covered in that skin. 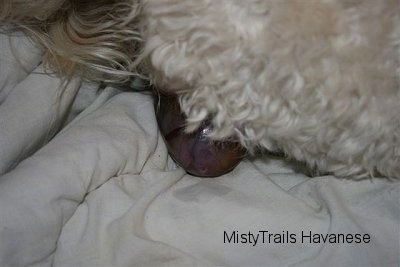 The head is out 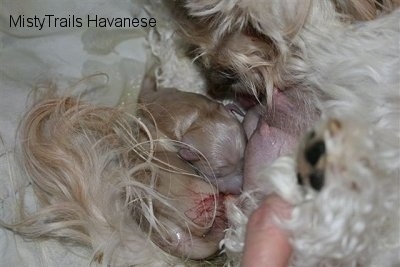 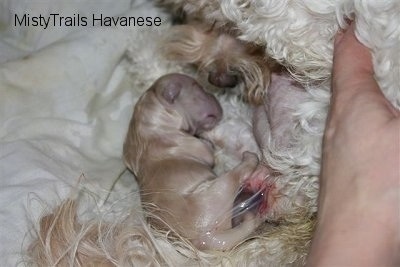 Pup is still attached to the dam by the cord, but let’s worry about getting him going first. 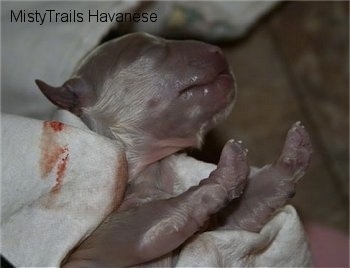 This is a white champagne puppy, BUT he is kinda blue. NEVER give up on a puppy; you can revive them. LEARN HOW.....!! This puppy needs heat and a good rubbing to make him mad...get gently aggressive. HEAD down to drain the mucus 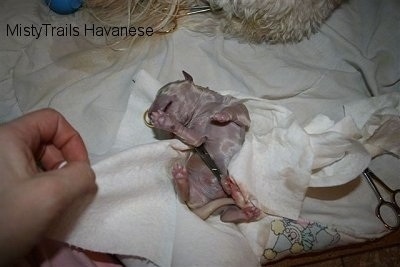 He is pinking up. Hemostats are on his cord, stopping him from bleeding. I suck out his mucus with the blue bulb you see in the background. 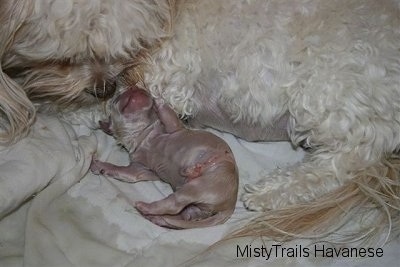 I give him to his mom for a minute. He is a huge, 230-gram (eight-ounce) puppy from a nine-pound dam. The average size is six ounces, but five to eight ounces is common. This boy will be called Red Boy. I use a red Sharpie marker on this tail to mark him. I weigh him, dry him and get him warm. In a warmed up rice pad that I microwaved I wrap the puppy like a hot dog in a warm bun. See how nice and champagne he is, and how he has pinked up? Reviving puppies is MUCH easier than some think. 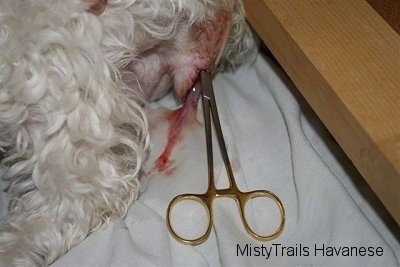 Now when I clamp the cord, I put on two hemostats and cut in the middle. One pair goes with the puppy, and one pair stays on the dam. Forty percent of the time the placenta comes out with the puppy, while 60% of the time, it stays inside and follows. I like to keep a hold of it, and the sterile hemostats do just that. 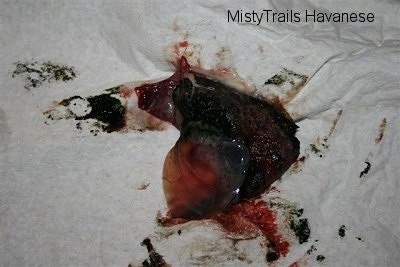 Got that placenta—this litter has five puppies (one born so far). I usually let the dam eat two placentas, but Mysti doesn't want any.

See how yucky the placenta is and also the greenish-black tarry color. This is the stuff you want to see AFTER the puppy is born, ideally. Textbook birth is the puppy is born first, then the placenta. If you see black green tarry stuff, it usually means there is a dead puppy. Some green is fine, however.