A day in the life with Bruno the Boxer. 1 year, 3 months—87 pounds, 24 1/2 inches from the ground to the highest point of the shoulders (the withers). 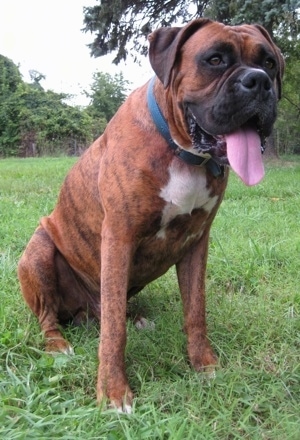 It's summer and summer means vacation. Unfortunately the dogs were not able to come. Instead of five people in the family, Bruno was home with one person who was at work most of the day. Bruno received a morning run in the woods, an afternoon run in the woods and a nightly quad run. It was a lot of exercise, however what he was not getting were his pack walks—the walks where he is to walk beside or behind the humans, concentrating on his walk, and not on his surroundings. Three days had passed... 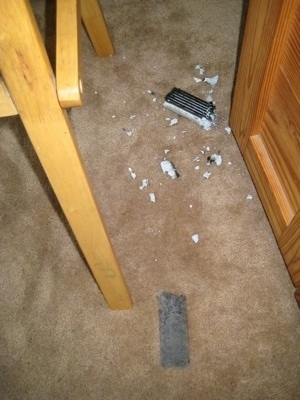 And it started...Bruno was a VERY Bad Dog! He chewed things up. A lot of things. I don't have pictures of all his bad deeds because I was away, however here is a picture of the white board erasers he chewed up. He's not even allowed in this room and he knows it! 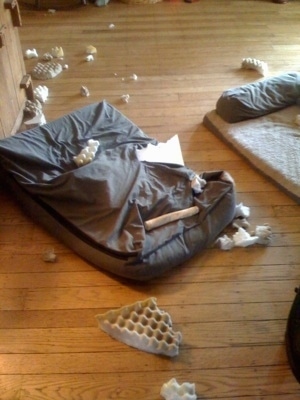 And his dog bed...! Notice his rawhide bone on top of his bed!

Halfway into the week Bruno and Allie were boarded at the kennel overnight. While at the kennel he received no exercise at all. I am sure he had a lot of excitement with all of the other barking dogs and the girls at the office who absolutely love him, but no exercise. 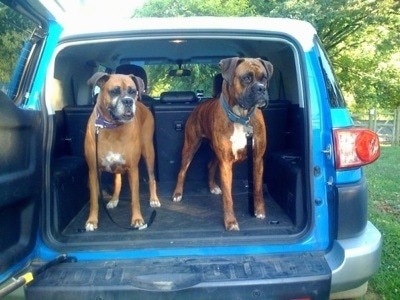 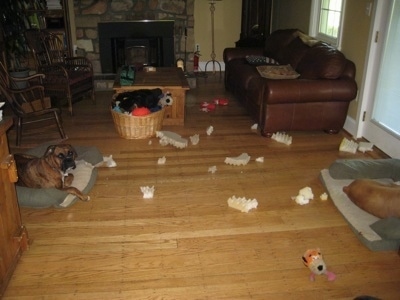 Note: Bruno's bed belongs next to Allie's bed against the white door, not on the other side of the living room. Would have loved to be a fly on the wall to watch how he got it over there. Look at the pieces of cushion he pulled out of his bed.

He chewed more of his bed, he chewed shoes. He peed inside! The kennel had given him Milk Bones, so he was farting and on top of that, he got diarrhea and diarrhea he did…all over the house.

I came back from my week away and he was still being a bad dog despite his runs in the woods. He was so untrustworthy we had to leave him outside in the pen even if we were only going to be gone for a half-hour or he would have picked something up to chew. Keep in mind Bruno lives on 62 acres and has plenty of room to run his heart out. He chases the golf cart and quad, he hikes in the woods. But none of these things were calming down this pup.

I knew exactly what he needed...a nice LONG meaningful walk. A walk where he is just to walk, following his humans, not allowed to sniff or pee, just walk. I admit after being gone for a week it took me two days to get him out, due to an all-day event I had to attend the day after I got back. We do not have a convenient neighborhood. He has to be driven to good walking grounds. In the meantime he was still getting his runs in the woods etc...and he was still being a bad dog. A really bad dog. Chewing everything up, sneaking in rooms he is not allowed to be in. He could not be left inside the house alone. Not even for ten minutes. It's now been five days since I have gotten back into the routine of giving him a nice, meaningful walk—one that makes him want to go to his dog bed and sleep—and Bruno has not done any more bad deeds. He is again calm and happy, content to chew only his bones. Thank goodness the walks worked, because if they had not, living with Bruno would have been very stressful! 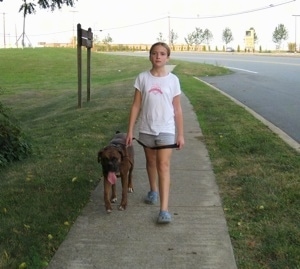 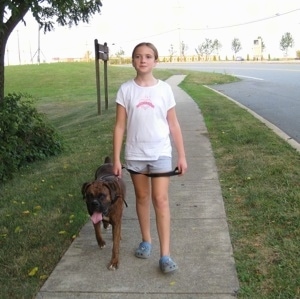 Good boy, Bruno; walking next to her, but not pulling her. Bruno is one strong dog and if he wanted to, he could drag her across the ground. However he doesn't, because he sees her as his pack leader and he is following her. 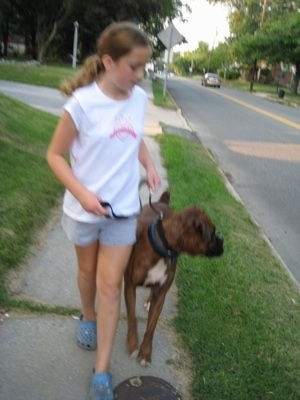 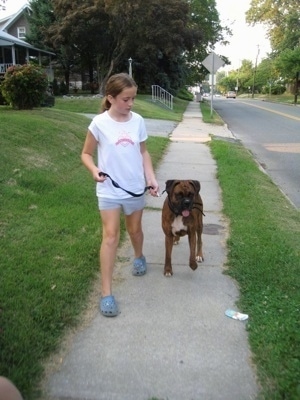 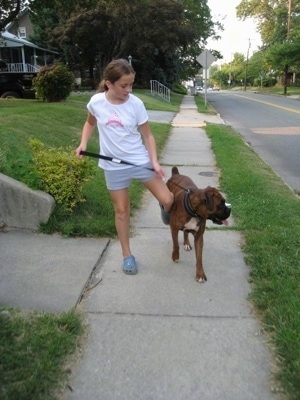 Oh but that dog is really barking at him now...Sara bops him in the side as she tugs. She says nothing to him. No words, just a bop, a tug and she keeps walking forward. 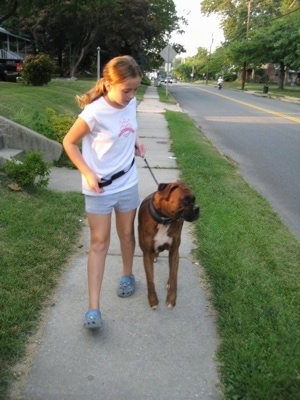 Bruno is looking at the dog that is REALLY barking. Sara gives a tug and pulls him back on track as Bruno stepped in the dog's direction. All while Sara keeps walking.... She says nothing...does not talk to him at all... She just keeps him moving forward. 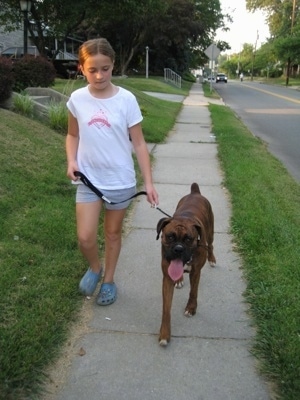 And Bruno is back with her, his attention back on her, not on the barking dog. 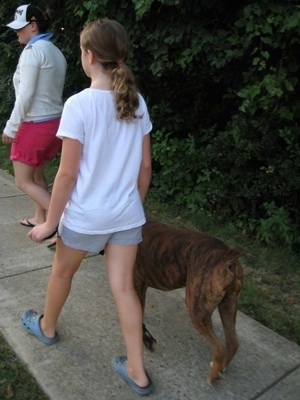 And off they go to finish their walk. Good job, Sara! (Pictures posted in the order they happened. I had been trying to get a good walking picture when the above happened. I decided to post them all instead of just the ones showing him walking nicely. There you have it, how a 10-year-old gets an 87-pound dog back on track. And she walks Bruno several times a week.) Bruno right after one of his hour-and-a-half walks. We had not even made it home yet and he was already beat and ready for bed. 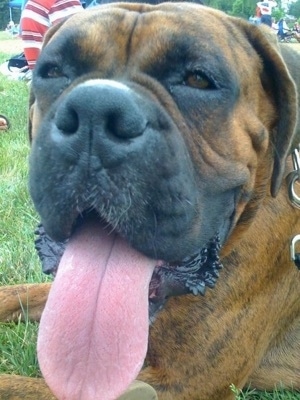 Darci the English Springer Spaniel visited the Maguire Farm. Bruno had a great time running around with her and Darci, being the bird dog she is, loved seeking out any birds she could find. She even enjoyed chasing a few cats! She also loved swimming in the pond with Bruno.

Allie the Boxer, Darci the English Springer Spaniel and Bruno Bruno, Bruno, I really don't think Darci needs you to clean the inside of her mouth! Oh Bruno, what's up with the slobber! 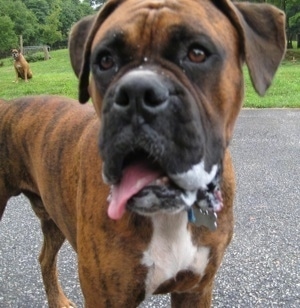 Are we looking cute here or what? Who wants a kiss now?