A day in the life with Bruno the Boxer. 1 year 8 months—99 pounds, 24 1/2 inches from the ground to the highest point of the shoulders (the withers). 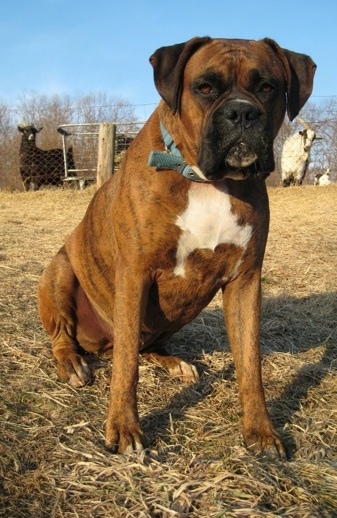 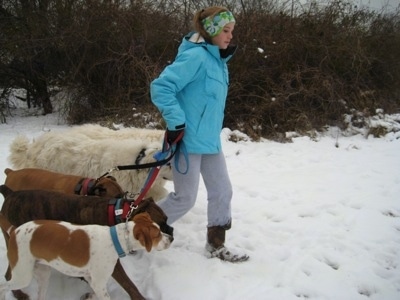 Darley the Beagle mix comes over to spend the day with our dogs while her owners are out. First things first, a pack walk is in order to ensure that everyone gets along before we set them free to play. While Darley has met Allie and Bruno before, she has not spent face-to-face time with the two Great Pyrenees Tundra and Tacoma. There is no better way to introduce dogs to one another than to take them for a walk where the dogs heel next to or behind the humans. 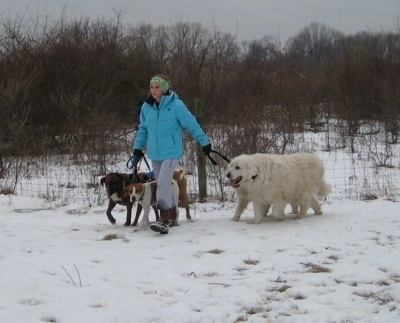 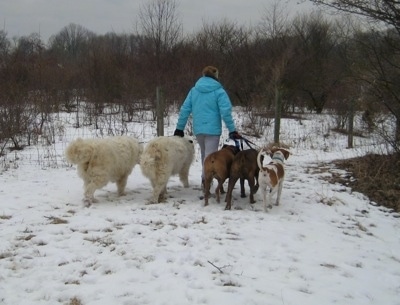 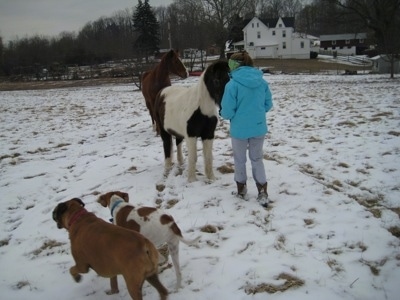 After the walk we enter the horse field. It took a couple of corrections to stop Darley from pointing at them as if they were fair game. She quickly learned she was not allowed to chase the horses. 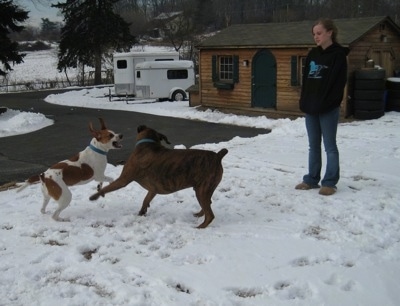 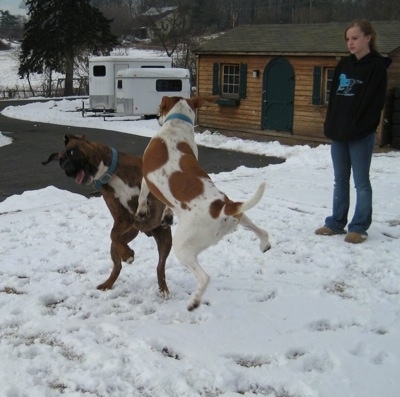 Tia the Elkhound comes over to play. 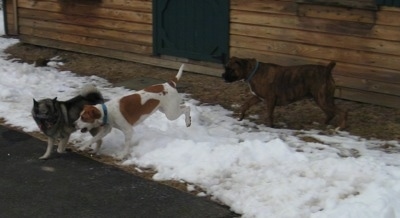 Tia the Elkhound, Darley the Beagle mix and Bruno the Boxer 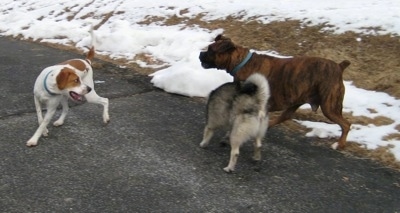 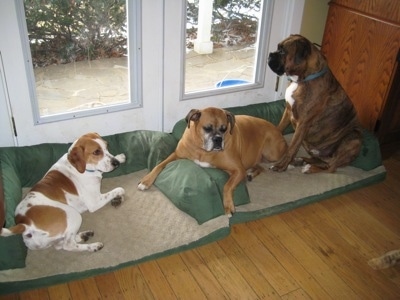 The dogs resting after a lot of excitement. Inside the house it does not take much to teach Darley where she is and is not allowed to go. They are not allowed into the family room or up the steps. She happily accepts this and fits right in with our other dogs. Setting boundaries for dogs is important to their mental well-being. Dogs instinctually need structure.

The guineas are out and there is a Beagle loose!

Amazing, even with her hound instincts she has learned to leave the guineas alone. We had worked with her in the past on this.

Good girl, Darley. She went around them and boy were they squawking at her.

Bruno and friends.... A group of us decided to start getting together for pack walks. We all agreed that we can invite friends to walk their dogs with us, so long as the owners make the dogs heel on the lead. When one gets this many dogs together at one time it only takes one dog that believes he is above the others in the pecking order to set the others off raising their guard and starting a fight. In this group we had ten dogs: two Boxers, two Great Pyrenees, two Shiloh Shepherds, a Beagle mix, a Golden Retriever, a Miniature Pinscher and a Norwegian Elkhound mix. Each time we walk we are going to choose a different destination. This time it was on the trails through the woods and over to a neighborhood.

We walked about seven miles total according to the pedometer I had with me. From left to right: Rusty the Golden Retriever, Shadow and Meadow the Shiloh Shepherds, Darley the Beagle mix, Allie and Bruno the Boxers, Tundra and Tacoma the Great Pyrenees, Twiggy the Min Pin and Tia the Norwegian Elkhound. 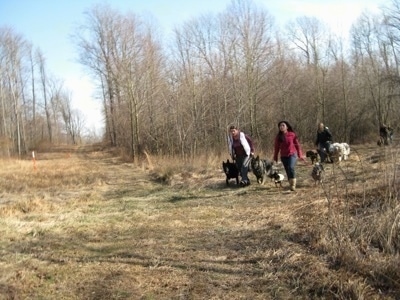 Because of Allie's bad knee we took her on the trails but walked her back to the house before heading to the neighborhood. Allie is able to go on short walks, but not on very long ones. 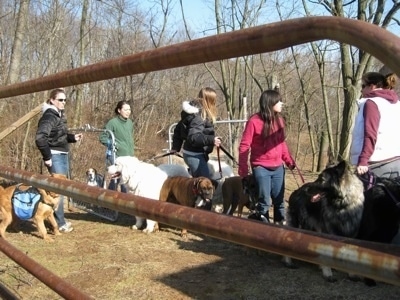 Getting the dogs through the gates—everyone holding a leash made sure they went through before the dog. 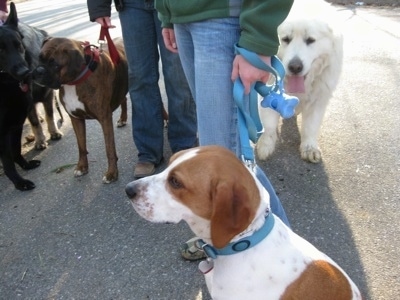 Bruno just loved being surrounded by all of the mentally balanced dogs. Bruno is smelling Shadow the Shiloh Shepherd, on the right is Tundra the Great Pyrenees and front Darley the Beagle mix. In the neighborhood people kept coming out of their houses and pulling up in their cars to see the dogs, which was really fun for us, but sad if you think about it because at least half of the houses in the neighborhood own dogs yet no one seems to be out walking them. 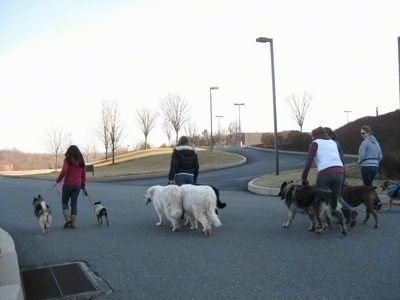 All dogs, no matter the breed, mix of breeds or size of the dog have a primal instinct to migrate. When a dog does not get to walk and simply gets his exercise by running around a yard it makes the dog mentally unstable. Picture yourself not leaving your own bedroom for days on end. To your dog your yard is just a larger cage. Dogs were meant to walk and when they do not get this instinct met their personality changes. We humans tend to regard this change as a "breed trait" when really it is an effect of a dog that is not mentally sound due to lack of instinct fulfillment. For example: when a dog runs top speed around the home, spins in circles, repeatedly pouncing on toys or whines, just to name a few. 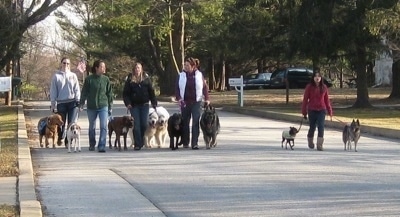 And walk we did. 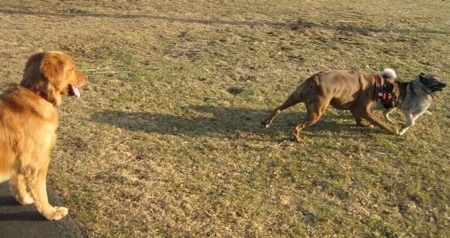 After the walk we let the dogs play in the yard. It is such a joy to see so many dogs play together so well. Since the dogs all heeled on the lead during the walk, none of them had an alpha mind-set and they all regarded themselves on the same subordinate level. Bruno is chasing Tia the Norwegian Elkhound as Rusty the Golden Retriever looks on. The second after this shot Rusty took off chasing the two of them.